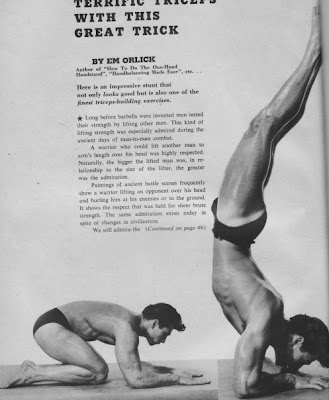 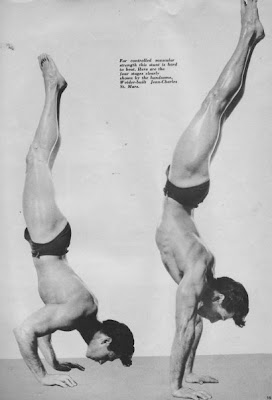 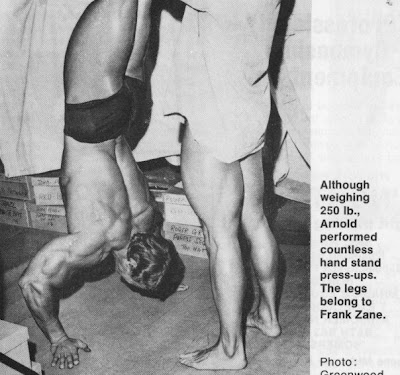 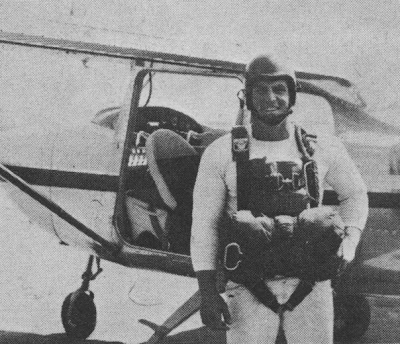 Long before barbells were invented men tested their strength by lifting other men. This kind of lifting strength was especially admired during the ancient days of man-to-man combat.

A warrior who could lift another man to arm’s length over his head was highly respected. Naturally, the bigger the man lifted was, in relationship to the size of the lifter, the greater was the admiration.

Paintings of ancient battle scenes frequently show a warrior lifting an opponent over his head and hurling him at his enemies of to the ground. It shows the respect that was held for sheer brute strength. The same admiration exists today in spite of “changes” in civilization.

We still admire the man who can hold another at arm’s length over his head. Many acrobatic acts center their appeal around this feat of strength. In gyms everywhere, being able to “press your own weight overhead” has long been an accepted measure of strength.

When competitive lifting was in its infancy you just hadn’t made it unless you could press your own bodyweight overhead. You might say this was like becoming 21 years of age, a full grown lifter.

Over the years this one feat of strength, more than any other, has been separating the men from the boys. It became to “bodybuilding” a kind of milestone that everyone aimed at, or tried to eventually surpass. Strangely enough, it still exists to this day and shows itself in a multitude of different ways.

One of these is the Handstand Press. Every gymnast, acrobat and handbalancer invariably strives to master the various handstand presses. You just aren’t really a good performer unless you can do a PRESS, not once, but a number of times.

When you perform a handstand press you are actually pressing your own bodyweight overhead, but you are doing it in an upside-down position. In some ways it’s even harder than pressing your own weight with a barbell because you’ve also got to balance yourself in an unfamiliar way. However, if you do the handstand press against a wall, where you don’t have to worry about balance, you are still going to find it tough at first. This is primarily due to the fact that you are pressing bodyweight in a reversed manner.

Needless to say, this unusual triceps exercise brings more muscle fibers into play, but works them from different angles, and thereby can stimulate new growth and strength in even an experienced lifter. Proof of this can be seen in the fine triceps development and power possessed by all expert handbalancers, and by the above average pressing strength they have. Further proof can be found among weightlifters who use the handstand press regularly to give them extra pressing strength.

Among the most popular of the Handstand Presses is the Press from the Tiger Stand, commonly known as “Tiger Bends”. Wherever strongmen gather you are sure to see this stunt performed. It’s not easy, not by any means, and takes considerable skill, as well as strength, but that’s probably why people are so challenged by it.

Here’s how it’s done –
(1) Kneel down on the floor. Place both of your hands flat on the floor with your palms facing down. Then lean forward and lower your forearms to the floor. Your hands and arms should be shoulder-width apart.
(2) Raise your head and look at the floor about ten inches ahead of your fingers. Now, double your knees up to your chest and raise your rear end up over your head. Then straighten your legs, arch your back, and point your toes. This puts you in the Tiger Stand which you must learn to hold easily before you can go on to the next stage.
(3) Let the weight of your body move forward, and at the same time push hard on your hands and shove your chin about ten inches in front of your hands. This will raise your elbows off the floor, and you must immediately press hard enough to take your forearms off the floor too. At this point you will be doing an ordinary bent-arm handstand.
(4) The final part of this stunt consists of pressing your body straight up until your arms are straight with elbows locked, and you are doing a perfect two-hand handstand. The secret of this part is to keep on going. Don’t stop anywhere on the upward journey. This movement starts the minute your elbows leave the floor and you must keep it going all the way up. If you stop anywhere on the upward trip, you’ll have a tough time pressing the rest of the way, unless you happen to have exceptional strength. However, if you once get into motion, and keep moving, you will be able to do at least one Tiger Bend Press Up even if you can’t press your own bodyweight overhead. When you master one of these press-ups you should try for two in a row. Just lower yourself from the handstand to the Tiger Stand again, and then do your second Press Up. This will be much tougher than the first, because much of your strength will be used up lowering yourself and fighting to hold your balance. However, with practice and lots of it you will be able to do two or even three of these in a row. Some exceptionally strong men can do more, but they are few and far between and even if you can do just one you’ll be in a very specialized class.

If it feels impossible at first, get a partner to stand beside you and give a little help. All he has to do is grab your ankles while you are in the Tiger Stand and give you enough “lift” to get you past your sticking point. He can gradually ease off his assistance until you are doing the press alone. If you train alone, aside from using a wall for support in the early stages of learning this movement, you may find doing partial repetitions helpful in gradually gaining the strength and balance necessary to complete two, three, or more consecutive presses.