Make A Good Start For The Clean - Jim Halliday 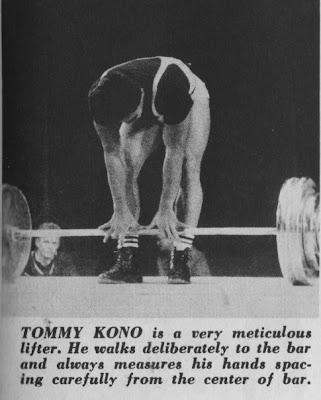 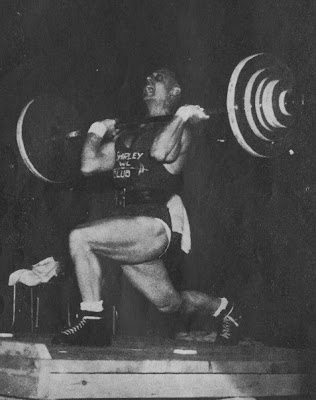 Make a Good Start for the Clean

I believe the commencing position for the Clean is of vital importance. The initial stance governs the amount of power, the direction the weight takes, the co-ordination of the action and as a result of all these, the concluding position.

It must be as low as possible to ensure maximum leg-drive, yet it must not be so low as to constrict the leg action. Because of the narrower hand-spacing usable compared to the Snatch, a much more “compact” position is possible and I also suggest the composition of the movement demands a narrow foot spacing also, which can serve a number of useful purposes. It allows for a lower position without constricting the legs and lower back, and it lends itself to a better position over the bar, giving one greater leg drive.

I always commenced with the feet together, but this would not suit in all cases; the extent to which the legs can be bent and the distance necessary between the feet being governed to a large extent by the length and structure of the legs. Still, the lowest possible position, with comfort usually equals the better resultant action.

Both split and squat actions can be employed but, whilst I was a natural squat snatcher, the squat clean was not for me, so I cannot write about it with any practical authority. I can say, however, that few lifters manage to extract full potential from the squat version. This, I venture to suggest, is because they have not completely mastered the timing, which is the most vital factor in this technique. To ensure the maximum efficiency, the bar must arrive at the shoulders as the knees are fully, or almost fully, bent. If this does not happen it is obvious the weight has been pulled higher than is necessary. This proves that with proper co-ordination and timing a bigger weight could be employed. Of course, the timing and co-ordination are essential on the split, but not quite to the same extent, the action being more complex.

Once the low position has been mastered it should be assumed naturally and easily, because there should be no delay at this point of the lift. The arms should be unbent but not rigidly set, the back must be flat, the head set back but not “fixed”.

The initial effort is all legs, the weight must move with the very first output or power (any raising of the buttocks without material effect, without bar elevation, is disastrous) and this first drive is continued until the legs are fully extended and a full heels-raised position is reached.

Because of the heavy weight used in the Clean, body action is called for earlier than in the Snatch. This is essential to guarantee compensation of position, maintenance of the bar’s velocity and concluding position,

The hip-through movement should begin as the bar passes the knees, and because of the short distance the weight travels it must be enforced more quickly. This action also permits the muscles of the trunk to be employed at an earlier time, but this should not lead to any attempt to bend the arms until full use has been made of the legs and they are extended fully. As soon as the arms bend there is a vital reduction in the power potential of the legs and body and almost instantaneously this is lost completely, so it is obvious that this part of the action (the arm bend) should be delayed as long as possible. Such a delay naturally means that once the action does begin it must be fast. Very fast!

This is the real meaning of speed in Olympic lifting. Power there must be, co-ordination also, but SPEED is vital so that full use can be made of these other factors.

A man can be fast yet not have any success. A man can be powerful yet limited to low poundages. Only by proper co-ordination of the two can the maximum be attained.

As the bar passes the knees, the hips go forward, back and shoulder muscles come into play, the rise on to the toes takes place, the head commences to go back slightly and the whole concept of the thing at this stage is one of power in the balance.

As soon as the leg drive comes to an end the arms begin to accept their share of the effort and the split commences. It is here where speed is essential.

The feet are clear of the floor, the major muscles are impotent, one is literally in mid-air trying to hold a weight on bent arms; the weight is now only proceeding upwards from the force instilled by the now-extinct leg-drive and soon the now-slowing bar will stop and gravity will bring it crashing to the ground.

There is now NO POWER to prevent this. ONLY SPEED. Only a rapid arm movement to turn the bar into the shoulders and a smooth trained leg action to put the body beneath the bar.

All these actions are completely complimentary to each other. There is no separate leg drive, no split or squat, no arm movement – ALL ARE ONE MOVEMENT, one fluid, coordinated action, and they must be thought of as such if the movement is to be successful.