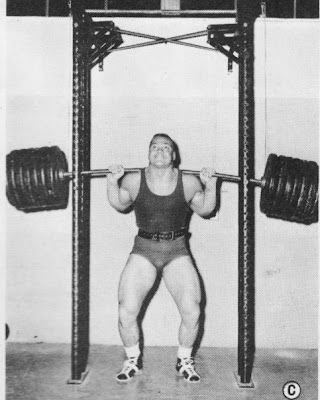 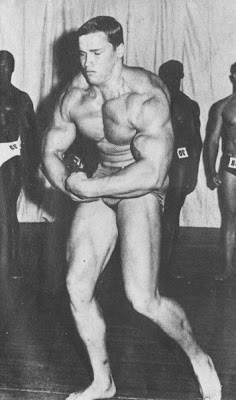 Power Training
by Steve Stanko
Many bodybuilders have started off power training and when they have added sufficient bulk, they train down for musculature. Many physique champions and strong men have chosen this route.

Power training involves using heavier weights and less repetitions. In some exercises four and lower reps are used, in most six is the limit. When muscles are forced to function under great stress, their contractile ability is tremendously increased, thus resulting in greater musculature.

Building body bulk must start with the large muscles, which are the legs, hips and lower back area. The combination of heavy leg and back work and enforced deep breathing has been known to result in great physical changes in a matter of months.

Heavy leg work is the big factor in this. The remarkable thing about heavy leg work is the speed at which all the muscles of the body respond and increase in size and strength relative to the gains in leg and back strength. Heavy leg work means the squat. The quickest way to bigger arms and a bigger chest is to use squatting as a foundation builder.

After a few sets of hard-worked squats, wherein extensive deep breathing results, the lifter should do some very light pullovers on the flat bench, breathing deeply as the bar is lowered behind the head with straight arms. This, aside from adding to rib-box capacity, also ensures a generous supply of oxygen to the body in amounts it is not accustomed to.

Squatting is still the best bulk and power exercise of all. You handle heavy weights and use the largest and strongest muscles of the body. The squat induces very heavy breathing when worked hard, as can be experienced following a set of six, full out repetitions.

After sufficient warmup sets, start your work sets of squats with a poundage you can use for 6 repetitions and do 2 sets. Then add enough weight to the bar so that you can only do 4 reps. Do 2 sets of 4 reps. Between each set of all your squats, go to the flat bench and a set of light straight-arm pullovers. Do from 10 to 12 repetitions. After two months have elapsed with this routine, you can another pair of squat sets for 3 reps with an added poundage increase.

So far we’ve stressed the squat as the key to building body bulk and overall power, but there are two other exercises that must fit into this program – the bench press, and heavy overhead presses while standing.

In the bench press use as much weight as you can for 4 repetitions. After 2 sets, reduce the weight to a poundage that will permit 6 hard reps for 2 sets. Then do a set with considerably reduced poundage and a very wide hand spacing. When bench pressing with a wide grip, lower the bar slowly and steadily, never lower it quickly with this grip.

Breathing is just as important in the bench press as it is in the squat. When you have pressed the bar to arms’ length, take two deep breaths, hold the second, and lower the bar to your chest. Press the bar and exhale strongly when it hits the sticking point.

The overhead press develops the upper back, arms, and shoulders. All good pressers have good deltoid development. The shoulders increase in size as the weight you press increases. If you have a power rack or a set of squat stands use them, as your back and legs should be tired from the heavy squatting.

Follow the same schedule for your overhead presses as was listed for the prone press.

As you progress with this routine you may add the deadlift to your program, 2 sets of 6 repetitions.

Over the years Muscular Development magazine has published a number of power and bulk gaining articles. Here are a few of the important ones:
So You Want Muscles Fast? by Gord Venables
– January 1964.
How I Gained 50 Pounds of Solid Muscle by Bill Pearl
– February 1964.
My Overload Power System by Bill March
– March 1964.
Power Training For Beginners by John Grimek
– April 1965.
Three Reasons Why You Should Do Squats by Samuel Homola
– June 1965.
Leg Specialization For Greater Bulk by John McCallum
– March 1966.