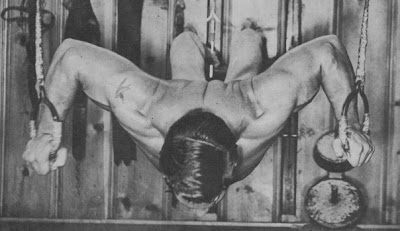 The Roman Rings
by Charles Coster
The Pectoralis Major is known as the greater breast muscle. It has its origin at the inner two-thirds of the collar-bone, covers the full length of the breast-bone and the cartilages of the first six ribs, to be inserted in the upper front surface of the humerus.

The purpose, or action of the muscle enables the arm to be drawn inward, forward, and downward. The pectorals also help the rotation of the arm inward, and assist in the expansion of the chest.

This exercise is essentially a “tension” problem, as can be seen from the accompanying picture posed by Bill Pearl . . . and in this Roman Ring Dip movement, with the feet extended onto a ledge at the rear, “continuous tension” is present at all stages of the movement . . . which also works the Anterior Deltoids considerably.

Assume a similar position to the one shown in the top photograph. Don’t try to do too much to start with – otherwise you will find your muscles exceptionally sore the following day. Bear in mind that your hands will “vibrate” when the dips are made and the handles will tend to wander in all directions at first. Find out your own capacity gradually, then try to work up the sets, using six to twelve reps as progress is made.

You will notice that Bill’s arms are bent at right angles in the picture, but this is not the only way that this exercise can be performed. Even greater tension can be placed on the muscles if the hands are moved outward a little, and if this is experimented with it will become noticeably more difficult.

A third variation, the most challenging of all, can be made WITH THE ARMS HELD STRAIGHT throughout. The great Alan P. Mead used to perform the exercise with the arms held straight, which of course means that the body is raised and lowered by controlling the INWARD and OUTWARD movement of the hands WITH THE ELBOWS KEPT LOCKED.

The best way to ease yourself into this most difficult variation is to perform the lowering movement in three stages – half-way, three-quarter-way, and then finally the full movement.