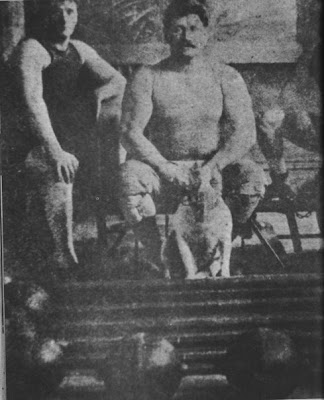 George Zottman and his collection of thick-handled dumbells.
Dumbell in the foreground weighs 175 pounds. 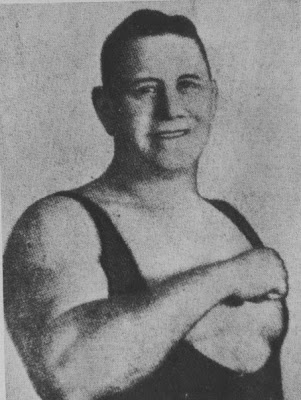 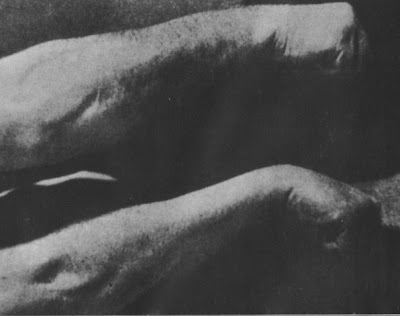 During a lull in a weightlifting contest in back in the late twenties, a lifter, well known for his grip strength picked up a pair of smooth 50-pound plates, pinch grip, and carried them over to one of the judges.

The old judge picked up each 50-pound plate, held them there for a while at his sides and then – to the amazement of everyone – held them out at shoulder level with straight arms!

The judge was none other than George Zottman, one of ’s greatest strongmen.

George Zottman was born in in 1867 of German parentage. He set records in squatting, harness lifting, deadlifting and one hand pressing. Some of his dumbell press records stand to this day! In the 1890’s, Zottman was considered the strongest man in the .

One of his favorite feats of strength, not as yet duplicated by our modern strongmen, was cleaning and pressing a 175-pound solid iron dumbell WHILE SEATED ON A CHAIR!

In a contest with the great Warren Lincoln Travis he set a Harness Lift record of 3,400 pounds. Travis became a Zottman booster and gladly joined the legion of strength fans who considered Zottman the best in .

Zottman had terrific shoulder width. From deltoid to deltoid he taped exactly 24 inches. Few men have broader shoulders. He had a pair of 19 inch biceps and, most phenomenal of all – a 15 inch forearm.

He stood 5’ 11” tall and weighed, in his prime, 218 pounds. In later years, the years he was judging weightlifting contests around , his weight went up to 260.

While he never claimed to be much of a Bent Press artist (his Bent Press was more of a one arm push and he didn’t do much bending) he set a record at this lift that still stands. Zottman One Hand Cleaned and Bent Pressed 264 pounds! It is doubtful that even the great Arthur Saxon could do that. Bent pressers in those days either stood the barbell on one end and rocked it to their shoulders or, if it wasn’t too heavy, cleaned it with both hands to one shoulder.

Few men had a forearm the equal of George Zottman. In the accompanying photo showing his lower arm along with that of another strength celebrity, the other forearm suffers considerably by comparison; yet if you cover Zottman’s forearm you will find that the other athlete has a much larger arm than it first appeared.

Zottman’s arm depicts the acme of gripping power. Thick muscular hands and a wrist dense with ligaments of great size swelling with might as the bulge increases in a huge mound of muscle below the elbow. If Zottman had bent his hand backwards as the other athlete is doing partially, the effect would have given an even greater “belly” to his forearm.

In one of the other photos, taken when he was 60 years of age (the one with flexed arm) you can see that his torso and chest are still massive and muscular.

Although many current strength athletes may have forgotten Zottman they are indebted to him for one of the finest forearm and upper arm exercises ever devised. So fine an exercise that it now bears his name – The Zottman Curl.

The Zottman curl is an alternate dumbell curl with some refinements. A dumbell held in each hand is kept moving continuously in this manner: the dumbell in the right hand is brought up from the side with wrist bent inward and palm facing in as you bring the dumbell close to the body in front of the chest. When the dumbell reaches the shoulder the hand is revolved, the palm then facing out and the wrist bent strongly back on the forearm as you lower the dumbell again to the side.

The moment you start to lower one hand start the other hand going through the same routine in a like manner. This synchronizes into a windmill-like motion and your reward is a husky pair of arms, both upper and lower.

Doing reps in the Zottman curl with a pair of 50-pound dumbells and not swinging but very definitely curling them and lowering them slowly requires a capable pair of biceps and forearms.

Zottman was very fond of cycling and this was a very popular sport around the turn of the century. He had a bicycle with a gear to sprocket ration of 10:1. This would give him literally a-mile-a-minute speed on the flat, but just try to pump such a bike up a hill. Although Zottman could do it, few other cyclists could pump his bike up the slightest incline.

His leg power was terrific and one of his favorite exercises was walking up a flight of stairs carrying a pair of heavy, thick-handled dumbells. His thighs measured 27 inches and his calves 18½”.

There is a special niche in the Strongman’s Hall of Fame for George Zottman. He was a fine gentleman, a great teacher and the strongest man in .