How I Trained - Reg Park 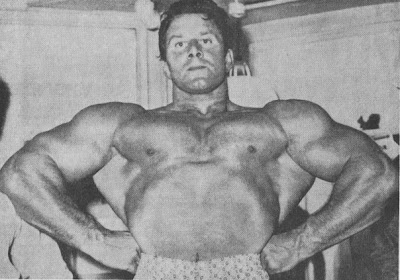 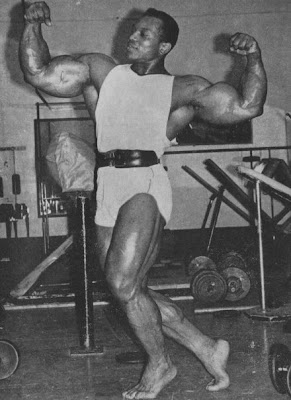 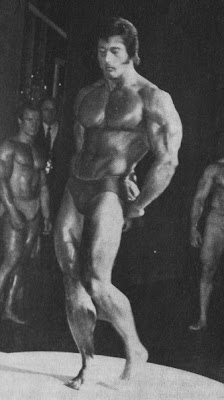 How I Trained to Win Mr. Universe
by Reg Park
from Health and Strength (1967)

My interest in development was kindled by my grandfather who worked in a coal mine from the age of ten to sixty-five, during which time he had pushed trucks full of coal along tunnels, and in doing so had developed a pair of enormous calves. His calves were so big that I remember my grandmother telling me that when he was in uniform during the 1914-1918 war, when soldiers wore puttees, his calves were so big that people thought he had balloons under his trouser legs. My grandparents had two paintings of an ancient Greek wedding where the man wore a toga and I recall thinking that whilst the groom had wonderful legs, his upper arms were poorly developed.

These memories go back to the time when I was about eight years old, so it is apparent that I was physique conscious at a very early age. At school I reveled in sport, in particular soccer, athletics and gymnastics, but although I possessed an athletic physique, at 16 I was 6 ft. and weighed only 160 lbs., certainly nothing to set the world alight. At the Leeds open-air swimming pool I was constantly aware of fellows who possessed good physiques, and I suppose it was inevitable that sooner or later I would meet someone who for those days possessed an outstanding physique in the person of Dave Cohen. Dave was 5 ft. 8½” ins. and weighed 185 lbs. with 16½ in. upper arms, a 47 in. chest, 26 in. thighs and a 32 in. waist. It turned out that Dave trained with weights in a room in his friend’s house, and when I asked if I could join him, he readily said yes.

I started weight training in about August/September 1945, and trained in a haphazard kind of way until April 1946, and from then until July 1946 when I was ‘called up’, I spent my free time at the pool and did very little training. At my army medical in 1946 I was 6 ft. and weighed 180 lbs. In the army I was in the P.T. staff in Malaya, and whilst I had plenty of exercise, only once or twice did I have access to weights.

I was demobbed in July 1948 and weighed 190 lbs. This was about a month before the 1948 Olympics held that year in London, and also the first ever Mr. Universe contest held in London. Naturally, by this time I was an avid reader of the muscle magazines and was therefore familiar with the top bodybuilders who were participating in the contest, namely John Grimek and Steve Reeves. It’s history now that Grimek won the 1948 Mr. Universe with Reeves runner-up.

I recall saying after the contest that one day I’d win the Mr. Universe title, and amongst those present were Oscar Heidenstam and John Barrs, editor of the old Vigor magazine. I’ve often wondered what their thoughts must have been as they listened to a young punk like me boasting that I’d win the Mr. U.

My training started in earnest about September 1948, when I was 20 years of age and weighed 190 lbs. In those days I trained three nights a week and Sunday morning, and if my memory serves me well, my course was something like this:

I don’t recall doing any squats in those days, but when I look back I realize that I was doing about 90 sets a workout which I’m sure was far more than any British bodybuilder was doing in 48/49. By March/April 1949 I entered and won the Mr. N.E. Britain, beating the previous national winner, Charlie Jarrett, who was also placed in the 48 Mr. Universe. Not bad for only 7 or 8 months of serious training. At this time I weighed 205 lbs. and my measurements were 48 in. chest and 16½ in. upper arm.

Three weeks before the 1949 Mr. Britain final I trained at Henry Atkins’ gym in Walthamstow, London, during which time I worked calves and thighs (3 sets of 20 reps) superset with pullovers on the Yoga bench, three mornings a week, and trained upper body in the evenings. I ate and drank great quantities of food and liquid, and my bodyweight by the time of the contest was 226 lbs. I drank two pints of diluted concentrated orange juice with glucose and honey mixed in it at every workout.

I won the 1949 Mr. Britain title with Paul Newington second and John Lees third. At that time my chest was about 51 in., arm 18 in. and thigh 26½. In December 1949 my parents gave me the greatest gift I could have had, a six month visit to America. In America I met and trained with many champion bodybuilders, such as Bill Barad, Marvin Eder, Abe Goldberg, Clancy Ross, Floyd Page, Norman Marks, Malcolm Brenner, etc. I also trained at the Weider Barbell Co. and am the first to admit that Weider, Barton Horvath and Charlie Smith all helped me considerably with my training, but Weider made far too many claims about training me, so many that I eventually wrote to him severing all connections with him. This was in April 1952.

I came back to England in May 1952 and decided to enter the Mr. U. which was held early that year in either June or July. In the meantime, York Barbell Co. had persuaded Steve Reeves to represent them at the same Mr. U. and he had gone to York to finalize his training there.

On the day of the contest I weighed in at 215 lbs. and Reeves at 225. Reeves was bigger than I was, but I was terribly muscular, with my legs, torso and arms cut up with definition. Reeves won the contest, but he was a very worried man prior to the announcement, and I recall the then editor of Health and Strength, Johnson, striving to convince him backstage that he had won. When I reflected that with less than two years’ serious training I had given the very famous Steve Reeves, who had been training at least five years, such a good run for his money, I did not feel too bad, but then and there I was determined that no one would beat me in the 1951 Mr. Universe.

In September 1950 I went back to the States, where I trained hard at Abe Goldberg’s gym in New York for the 1950 America’s Best Developed Man contest, held at St. Nick’s Arena in New York. I won this title and with it most of the subdivisions, and in doing so beat such famous bodybuilders as Floyd Page, Al Stephan, Ed Theriault and Al Pavio, who was the current Mr. Canada. From New York I went of to give exhibitions in Montreal, Toronto, Oakland, Los Angeles and Hawaii, returning to England in January 1951.

From January until the Mr. Universe contest I trained regularly, hard and heavy. Regular poundages used in training were sets and reps with over 200 lbs. on the Press and Press Behind Neck, Incline and Flat D.B. Press sets and reps with 2x140 lb. dumbells, Bent Rowing with 250-300 lbs., Incline D.B. Curls with 2x70 lb. dumbells, and 3 sets of 20 reps on the Squat with 320 lbs. My workouts in those days were:

My weight went back to 225 lbs. but I possessed a much different physique compared to when I won the Mr. Britain at 226. Now I was proportionate, balanced and more heavily developed.

My eating habits were not difficult. My mother cooked and baked well, and I ate anything and everything, and I was particularly fond of my mother’s baking and cups of tea, relying on hard training to use up the carbohydrates. As you know, I won the ’51 Mr. Universe after only three years of serious training.

As with each of the other two occasions when I won the title I was a little flat emotion wise after being announced the winner, and I REALIZED THAT THE EXCITEMENT WAS NOT IN WINNING BUT IN TRAINING TO WIN.