I would like to introduce the readers of Strength & Health to a strongman little known in the world of weights. He has never before been featured in any magazine nor has he entered a major contest, but three times a week he goes to the St. Paul YMCA and lifts phenomenal weights in a manner that must be seen to be appreciated.

When I moved to Minnesota in 1963, the only Minnesota strongman I was familiar with was Paul Bunyon. Since Paul isn't training much any more, I was at a loss for a gym in which to train until a friend suggested I try Mel Hennessey's basement. During this period I came to know Mel personally and to see his muscles in action. 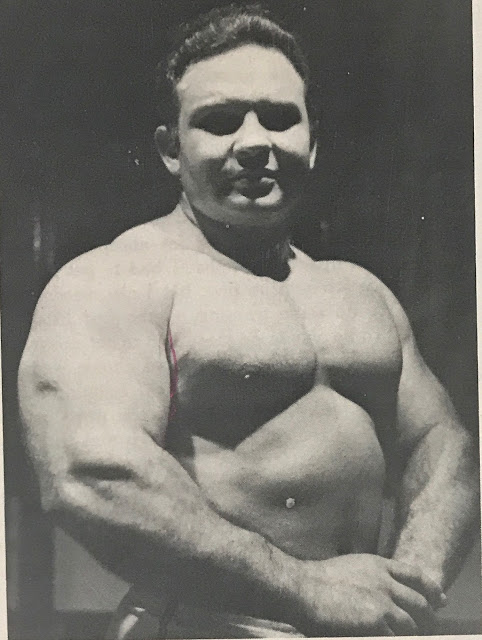 At a bodyweight of 215 pounds, Mel has bench pressed 535, squatted 535, and deadlifted 600. Although he seldom works them, he has pressed 300 lbs. from behind the neck and military pressed 325. When I say "military pressed" I mean just that. All of Mel's lifts are done in extremely strict style, which is why I say them must be seen to be appreciated. When you see him lifting over 500 lbs. in the bench press in such a smooth and deliberate motion you get a feeling of power than cannot be conveyed by merely quoting facts and figures.

Mel began weightlifting when he was thirteen years old, but it wasn't until he was fifteen and inspired by a television exhibition given by the great John Davis that he really began to take his training seriously. During those first years of training he was living at home on the farm and trained in his father's barn. He claims that he occasionally took his weights to school with him and exercised there. Actually, knowing Mel, it seems as normal for him to have carried his barbell to school as it does for the other students to have carried their books.

The Army interrupted Mel's training for two years. Being in the paratroops, he spent most of his time making jumps and skiing near Innsbruck, Austria. Next to weightlifting, skiing has remained his favorite sport.

After his discharge from the army in 1956, Mel moved to the Minneapolis-St. Paul area where he now lives and works as a warehouseman. There he began working out at Alan Stephan's health studio. Training in a well equipped professional gym under such a qualified man as former Mr. America, Alan Stephan, sure beat training on the farm and Mel's strength responded accordingly.

Since then, his training quarters have changed to his basement and finally to the St. Paul YMCA, but his strength has continued to gain at a rather steady rate.

At thirty-two years of age, he expects to continue gaining for at least ten more years. The fact that in the last two years he has increased his squat by 45 lbs. and his bench press by 50 lbs. indicates that he is certainly not slowing down. These gains are especially noteworthy when one considers that they are gains on already tremendous lifts.

Since Mel is really a bulked-up middleweght, one wonders why he doesn't go down to a bodyweight of 198 and attack the national bench press record in that class. In view of the fact that he pressed 450 five years ago at a weight of 195, it seems that this record is well within his reach.

The simple fact is, Mel is not interested in breaking records or winning contests. His sole satisfaction from weightlifting comes in training hard and getting stronger. This point is illustrated by the fact that it was only as a personal favor to some of his friends that he began entering local meets and he still looks upon them as nuisances that interfere with his regular training.

How did Mel Hennessey become so strong? As with any strongman, the answer to this question involves four elements: diet, exercise, rest, and all of these multiplied by persistence.

Mel's diet may be described in the simple phrase, "low starch, high protein." He eats absolutely no bread or pastries and avoids refined sugar as much as possible. His diet consists mainly of eggs, steak, green vegetables and a gallon of milk per day. He prefers eating five smaller meals a day to three large ones, consequently he uses his morning and afternoon breaks at work to dispose of two meals. He eats less on workout days, especially limiting his last meal before his workout.

Actually, were it not for the gallon of milk that he drinks every day, Mel's diet might be prescribed as one for losing weight rather than gaining. Of course, we must keep in mind that he eats these weight reducing foods in large enough quantities that they lead to gaining weight.

Following this diet has enabled Mel to weigh a solid 215 pounds. As his pictures indicate, there is little fat on this man.

The key to Mel's exercise routine is simplicity. He sticks pretty much to the tried and proven strength building exercises and works them very hard, rather than doing a variety of exercises of dubious merit.
Following is a summary of a typical week of workouts. 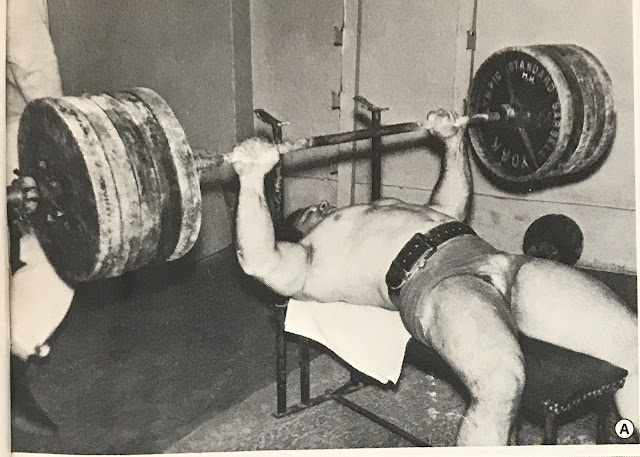 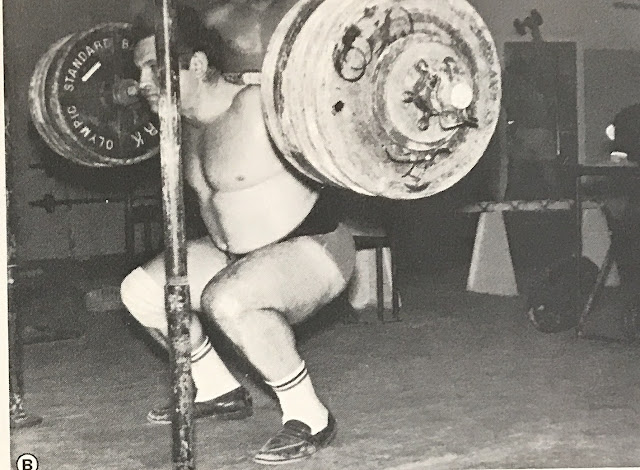 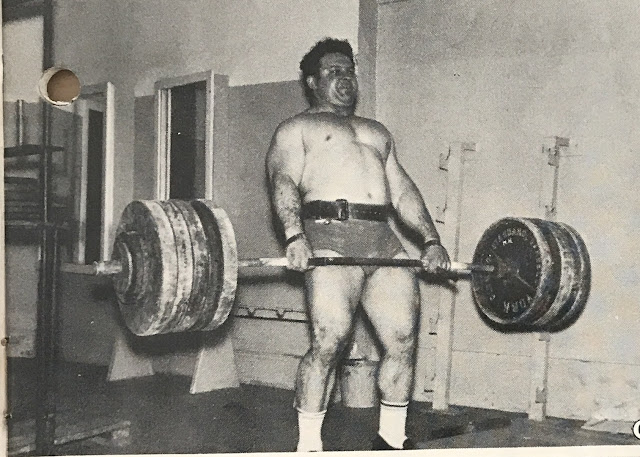 As you can see, aside from the poundages, this is a typical workout program for thousands of lifters. It is worthwhile to point out how thoroughly Mel warms up and that he frequently cuts the weight back after a maximum lift and does reps.

The one factor that can neither be photographed or written down with his routine is dedication. Yet this is a factor that has produced from an average program an un-average lifter. As Mel has said himself, "If weightlifting isn't in your blood, you'll never make it."

Mel's future as a weightlifter is hard to predict. Since he has gained more in the last year than he had in several years before, who knows what next year will bring. Certainly, he must be thinking about a 600 pound bench press in the next few years. At the rate Pat Casey and some of the boys are going, Mel won't be the first to bench press that magic mark, but he'll certainly be the lightest.