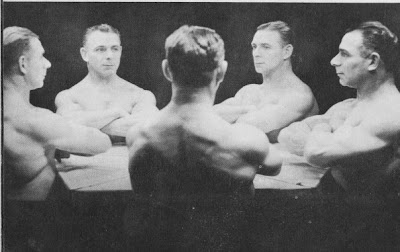 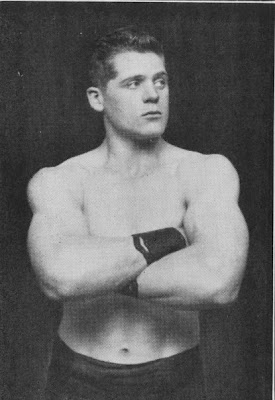 My Quarter Century in the Iron Game

“Mr. is of the opinion that a better way of conducting the contest would be to let each of the contestants select say ten lifts, with the privilege of throwing out five of his opponent’s selections, which would reduce the thing to a total of ten lifts. However, Mr. feels that each lifter shall have the right to choose some few lifts which cannot be thrown out. For instance, it is pretty well known that the is the best feat performed by Bill Lilly, and we suppose that Sig Klein should shine on such lifts as the Olympic Three or the Championship Five. The Bent Press is likewise one of the best lifts of Lilly and should be included in the contest, in the opinion of the man who has been selected as arbitrator by both parties. We leave this open to further discussion by both contestants.”

After this letter was published, Mr. Lilly, as was expected, answered, and here is his letter:

Having been informed as the lifts which Mr. Klein proposes shall be the basis upon which our forthcoming contest will be held, it is most evident, judging from the feats he has selected, that his desire to win is most extreme; and while I cannot blame him for wishing to make certain of clinching the title, I think it possible to make a better proposal and one, by the way, which he should not hesitate to accept. Mr. Klein is generally acknowledged to be the American Professional Middleweight Champion, while I prefer to consider myself his superior in any contest wherein the lifts might be chosen with no favoritism towards either himself or myself. As to the lifts, or rather feats of leverage and strength which he proposes, it is my contention that the same would too greatly favor Mr. Klein. For one thing, the majority of those feats have never been practiced by myself, and so far as I can discern have never generally been practiced by lifters, at least in this country. Looking at the matter from another angle, it would appear to me as though a champion should be judged and acclaimed on the basis of popular lifts and especially those accepted as proper for contests. We all know well enough that professional lifting enjoys neither the regulation nor the prestige of the amateur branch of our sport; nor can it be denied that the amateur side of lifting is ever gaining in popularity. It is therefore my proposal that we should include in our contest such feats as are officially accepted by the amateurs.

“Moreover, there is today a growing tendency to pay little or no attention to what a strong man can do, unless he performs officially in public on the so-called championship set of five international lifts; Charles Rigoulet is today accepted as the peer of strongmen, and his greatest feats are found among this official set. Why not then have our contest on a basis which is at least similar?

“As arbitrator of this proposed contest, Mr. , I suggest that you endeavor to bring about a satisfactory agreement with the following lifts being used as the basis of our contest for superiority. The lifts I have in mind are: The One Hand Snatch, the One Hand Clean and Jerk, Two Hands Clean and Military Press, the Two Hands Snatch, the Two Hands Clean and Jerk, the Shoulder Bridge, and if Mr. Klein wants it, in addition, the Two Hands Continental Press. Now, if so happens that Mr. Klein holds the American Professional Middleweight record on all of the above mentioned lifts excepting the , which single exception is one of the records held by myself. It would therefore appear to me that the proposal made by myself should not be regarded in any sense as unfair, especially when my opponent would be favored with six feats on which he is known to excel all others, not only in his own bodyweight class by my class, which includes men some seventeen pounds heavier than himself. Out of the seven proposed lifts you must note that I am regarded as superior on but one.

“Well Mr. , I trust that you will at least some merit in the foregoing, and I assure you that I place the utmost faith in your judgment in bringing about a satisfactory, fair and impartial agreement between Mr. Klein and myself. It is also most agreeable to me that you should act as referee and have full authority in the selection of all others who would officiate. I therefore leave everything in your hands and look forward to an early acceptance of terms which will be agreeable to all concerned.

Yours in Strength – Bill Lilly”

After the Lilly letter was published, I wrote another letter to Strength magazine which I believe should also be recorded here to clear up some of the controversies that usually go on before two professional lifters contest. After reading Mr. ’s comments and then reading Mr. Lilly’s letter, I wrote the following:

I was surprised to see your comments as appended to my letter of March 11 as published in Strength, April issue. While I realize that you doubtless made the suggestions in good faith and in the hope that they would serve as a guide in the matter of determining what lifts shall be included in the contest, I feel that I must remind you that I have already given you the basis for selecting the lifts.

“It seems that history would bear me out when I say that controversies of this nature have always arisen among professional weight lifters when it came to the selection of the lifts to be included in any contest. I know you will agree with me that the challenged and the challenger has always been accorded the choice in the selection of weapons or whatever was to determine the contest. I know you will also agree with me that the Olympic lifts are generally accepted as the standard, but since you have already granted that Mr. Lilly cannot surpass me in those lifts, I gladly omitted them from the list of lifts submitted to you in my letter accepting the challenge. And furthermore, I think you will agree that it is customary for the challenger to offer some proof of his ability in the subject for which he claims the right to contend for championship honors. In other words, I feel that Mr. Lilly should have offered proof that he may equal my own records which have earned me the title of middleweight weight lifting champion. I feel that I have been entirely fair to Mr. Lilly in the choice of lifts I submitted in my letter of acceptance, especially as I included several lifts in which he is supposed to excel. In the event that this contest does not take place under the terms outlined in my letter, I shall, at the next weight lifting show under the auspices of yourself or the A.B.B.M. (Association of Bar Bell Men), set up a standard mark in each of these lifts which I shall expect any professional challenger to equal within five percent in weight lifted in each lift, before I accept his challenge. I also reserve the right to include in any such contest the so-called Standard Lifts, namely:

“I want you to realize that I fully appreciate your efforts to promote this contest, as you are doing our mutual sport a great service. The more interest that can be aroused in our sport the better it will be, and I shall be the last man to do anything to obstruct any contest which will do weight lifting a good turn.

With kindest personal regards, I am,

Of course much talk was created about this proposed contest, and I started to train very hard for the match. It really looked as though it would materialize, but much to my regret this contest never came about. Since I had been training for the match, it occurred to me that I might just as well try to get officially credited for some of the lifts I had been practicing, and had unofficially made some records in doing so. I wrote that I would like to have a show at my gymnasium for a selected group of lifters and officials to witness the records that I would attempt to create. In the meantime more challenges were hurled about. First Jack Kent of challenged the winner of the proposed contest between Lilly and myself.