Not Just Pumping Iron: On the Psychology of Lifting Weights (1989) 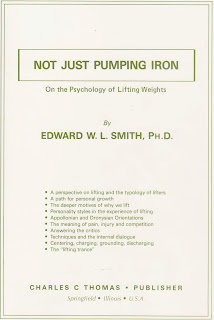 One day, during my internship, I was standing in the hall of the hospital talking with my supervisor. We were waiting for someone, and in our chatting we arrived at the topic of lifting weights. When I told my supervisor that I had lifted in high school and college, and from time to time since then, he said something which created a ripple which went to some deep place inside me. What he said was, "Think of all those hours you wasted lifting weights. Just think what you could have done if you had used that time to read and study or something."

That was 20 years ago, or more, so the wording may not be accurate. But, that was the gist of what he said. I don't recall what I replied, but I remember that that ripple of soul searching spread within me. After long and deep consideration I have come to regard my many hours with the barbells as well spent. I have no regret for the time I have given to lifting weights. My supervisor's statement to me was a real gift, in the effect it had. It led me to question the wisdom of my choice, and to a conclusion which in a while led me back to serious lifting.

Lifting weights has had a central role in my life for about 20 years -- competitive Olympic lifting in high school and college, bodybuilding during periods in graduate school, and after several years layoff, bodybuilding again, powerlifting, and then curling competition. I have experienced competitive lifting as a teenager, as a young adult, and as an older adult -- in that over-forty category given the euphemistic name "masters class." At time I have lifted for many months without having entered of even having intended on any competition. Having trained in all four of these lifting sports, and having competed in two of them, I have come to appreciate each as having something special to offer.

Lifting weights, in any of its forms, can become a vehicle for personal exploration and psychological or spiritual growth. The use of a sport for profound personal growth has been explored in writing by a number of people. The classic example is Zen in the Art of Archery by Eugen Herrigel (1953). Herrigel points out that although it may appear at first sight that it is degrading to associate Zen with archery, the martial arts are not just for utilitarian purposes or even esthetic purposes. His main thesis is that the martial arts are for making contact with the ultimate reality, that is, the training of the mind.

Further examples of the use of a sport for personal growth are offered by W. Timothy Gallwey (1974) in The Inner Game of Tennis, Gallwey and Bob Kriegel (1977) in Inner Skiing, Denise McCluggage (1977) in The Centered Skier, Michael Murphy (1972) in Golf in the Kingdom, Fred Rohe (1974) in his graphically beautiful and poetic The Zen of Running, Mike Spino (1976) in Beyond Jogging, and Koichi Tohei (1966) in Aikido in Daily Life. In addition to these books which focus on respective sports, two outstanding books have cut across specific sports lines. These are George Leonard's (1974, 1975) The Ultimate Athlete and Michael Murphy and Rhea White's (1978) The Psychic Side of Sports.

So far, sports psychology has had as its primary focus the use of psychological methods and techniques for the enhancement of sports performance. An example is using mental rehearsal to improve a golf stroke. In addition, sports psychologists have focused their research efforts on such topics as the personality of the athlete, particularly the personality factors which distinguish the athlete from the non-athlete, the social psychology of the sports team, organizational and management issues in sports, and motivation to sustain exercise programs. But, to reiterate, sports psychology has been mostly concerned with the improvement of sports skills through the application of psychological techniques.

It seems clear, then, that the orientation of sports psychology, as it is usually understood, has been the use of psychology in the service of sports. The collection of books which I have listed above, however, suggests an additional orientation. This second orientation is that of sports in the service of psychological growth and personal enhancement, or to borrow a phrase from Michael Murphy, "sport as yoga." These two orientations are, in a sense, opposites. And, although often times compatible, the two orientations may in some instances conflict. That is to say, there are times when what would enhance a sports performance would be of detriment to personal growth. This will become clear in some of the material later in the book.

Recognizing this dual orientation of sports psychology, I address both in this book. Part I includes an exploration of lifting weights as a path for personal growth. I focus in Part II on the application of psychological techniques to lifting weights.

I want to share how I came to recognize this two aspect relationship between lifting weights and psychology, which parallels the dual orientation in sports psychology. In my first Olympic weightlifting contest, a state meet in 1959, I was impressed by a lifter in the weight class above me. He was a good lifter, far stronger than one would have guessed by looking at him. In fact, he seemed thin. He was Oriental and a student at Iowa State University. Between his lifts he did something which was highly peculiar. Other lifters paced about or sat and talked with each other. But he went off by himself to an out of the way spot in the lifting hall and sat down with his legs crossed, and his eyes closed, and sat quietly. Remember, this was Iowa in 1959. In this context this was surely a peculiar behavior, and for an athlete in a macho sport at that. (We thought of weightlifting as macho, even though that word had not yet entered mid-Western vocabulary.) This was the first time d witnessed Eastern meditation. Whether or not he entered an altered state of consciousness or lifted while in an altered state, I cannot say. What I do know is that I surmised that his remarkable lifting was somehow made possible by this exotic practice which he performed between lifts. This was the beginning of my education in psychological facilitation in lifting weights.

The other side of the relationship, lifting weights as a path for personal growth, took me some time to recognize. There was not a single and dramatic moment of insight as was the case in learning of psychological facilitation of lifting. Instead, I got glimpses of this over a period of years.  For instance, I came to a familiarity with the "glow" following a workout. During my early years as a lifter I had bouts of depression, feeling sad, lonely, discouraged. Following a workout I most often felt a radiance about my body. This was an organismic experience involving a feeling of warmth and tingling of aliveness in my body, and a sense of optimism and well-being. A word I can now apply is "centered." My depression was temporarily vanquished and I felt a joyous peace and harmony.

Something additional happened when I became involved in Olympic weightlifting. I set some early goals such as a bodyweight Press, then a bodyweight Snatch. In reaching those, and further goals, I found myself not only lifting poundages that I had been unable to lift before, but setting and attaining goals of poundages which but a few months before I would not have not considered in the realm of my possibility. From time to time, I made one of these previously unbelieved of lifts which, using a popular phrase, "boggled my mind." I experienced a mysterious, ineffable feeling when I went beyond my assumed physical limits. I gradually came to recognize that the limits beyond which I was going were also mental limits, and, in fact, I learned that the mental limit was the more important one. This recurrent exceeding of my limits gave me a deep and lasting sense of self-confidence. I came to know that what I am able to do, when I am properly prepared, is often far more than I am able to guess beforehand.


So, having personally learned this dual relationship between psychology and weightlifting, I want to share what I know is possible. I intend this book for the majority of lifters, not the "professionals." I believe that the professionals are not good models for most lifters. The professionals and the professional-hopefuls may benefit from modeling after successful professionals, but the non-professional lifter would do well to recognize the two class system. The successful professional has a genetic advantage and has made a commitment to excellence of performance which may involve practices which are not in keeping with overall personal development. For example, the amount of time a professional must spend training far exceeds that which would fit the balanced life of a non-professional. In a seminar which I attended a few years ago, the Mr. America who was lecturing claimed that all of the top contest winners in bodybuilding contests used anabolic steroids. He said they had to in order to do their best and win contests in that highly competitive business. This is another example of a professional practice which is incongruent with the use of weightlifting as a path for personal growth. Not only is the training different for a professional, but there is a whole lifestyle that goes with being a professional which is different from the lifestyle of the majority of lifters.

And, it is this majority to which I belong, and to which I address this book.

Joe Weider has declared that bodybuilding is the sport of the '80s. Perhaps. At any rate, the listing of weight equipped gyms in any city and the rash of relevant magazines on any well stocked magazine stand attest to the burgeoning interest. Coverage of major bodybuilding, Olympic lifting, and powerlifting events on television is further evidence that pumping iron is no longer an esoteric activity and that the weight sports have reached a heretofore unknown popularity. It is timely that there be a book which invites and guides lifters in the use of the weight sports as paths for personal growth and enrichment.

NEXT: A PERSPECTIVE ON LIFTING AND THE TYPOLOGY OF LIFTERS.