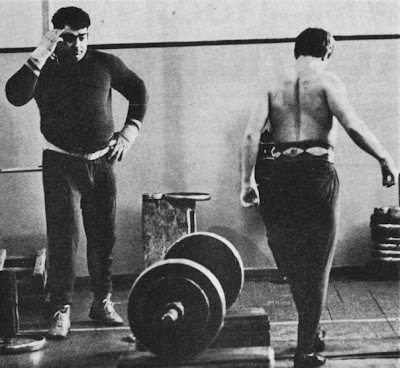 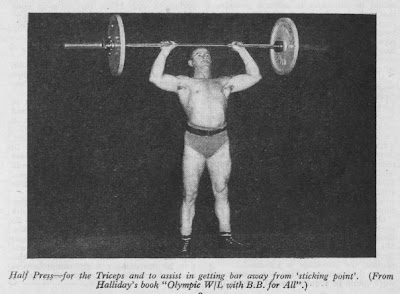 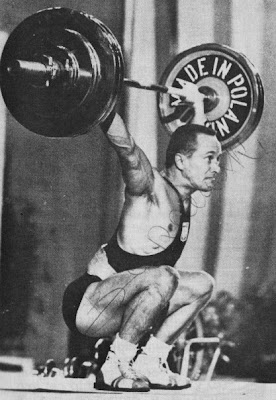 I have no intentions here of setting any individual schedules, but some advice on the number of reps, and a line on progression will perhaps assist everyone. Before proceeding any farther, I would like to make it clear that I do not believe in a set routine. By this I do not mean to imply there should be no system, I merely think that working to certain figures and reps is a mistaken idea.

I am convinced that the only way to progress is to work to maximum. The only way to work to maximum is to work until you can perform no more. The only way to be assured you have done this is to proceed until you fail. By “fail” I do not mean on some technical point, or because you were distracted or bored or FELT you had done enough, but because you had reached your physical limits. This cannot be done by setting yourself to do so many reps and doing them, it is only assured by setting yourself to attempt something you cannot do. By so doing, two purposes are attained. You really work to maximum and you set yourself a target. Once this stage is reached, suitable progressive measures are taken to give, once again, something to aim for, and give you maximum work.

Of course there are limits to such an idea, so far as reps are concerned. You must have a certain number to ensure you get a proper workout, and these must not exceed the number at which a state of boredom could result. For instance, when doing singles it would be ridiculous to select a poundage that only permitted you to do three or four single reps. It would also be wrong to use a weight that you could do above twenty single reps with, without failure. On the one hand, the work is too intense, and the latter routine would eliminate the advantages of singles, and be boring in the process. I put the minimum figure at 10 single reps, and the maximum at 14, on the Press and Snatch, with a set figure of 9 singles on the Clean and Jerk as the maximum.

This would mean for the Press and Snatch you would have to select a poundage that enabled you to do 10 singles, but with which the maximum of 14 reps was impossible. When the max single rep total was attained, suitable progress in poundage would be made to again comply with these directions.

On the Clean and Jerk the first attempt is set at 40 lbs. below maximum training limits. Singles are done with increases of 5 lbs. This gives you 9 attempts up to top figures, and when this is successfully accomplished the poundage is increased. On the first two lifts some warmup work would be required, and I suggest this should be confined to necessary, essential work only. For instance, if the working singles are to be performed beginning with 150 lbs., the warmup need only consist of 3 reps at 115, 2 reps at 130, 2 reps at 140, or something similar.


Rates of Progress Not Foretellable

The rate of progress cannot be foretold, but care in the selection of poundages must be taken to ensure the limits in reps are adhered to.

It may be necessary for some lifters to “split up” the routine. Not only may it be necessary, it may be advisable to do so. This could be because of the time element, because the physical condition made it practicable to do so, or because extra work was required on a certain lift. Any work of this nature is best done as an additional routine and not by extending the schedule at any one time.

This means that you would not under any consideration enlarge upon the work given above at that workout, but would do an additional work on a separate occasion.

I have now covered briefly in this series of articles two stages of training. In the first the lifter was experimenting in search of style. At this time he was doing a fairly comprehensive routine to give his body a base on which to work.

After he had developed this style, he embarked on a programme designed to polish the technique and to build power into his action.

After a period on this second stage he should have made some improvement in poundages, his style should now be developed so that he does not have to think about it too much, and his experiences should now enable him to be able to use his own initiative to a far greater extent than he could do previously.

This is only the beginning.

There is a limit to what can be gained from the performance of the orthodox lifts alone, although I am convinced that training on the lines suggested will give maximum results from this source.

The chief drawbacks to merely training on the three lifts only are the possibilities of boredom (especially at times when progress is temporarily halted) and the fact that the efforts are to diverse to allow concentration on any weak points that may occur.

Whether these arise in a lift, or part of a lift, the only remedy is to concentrate on the strengthening of the weakness by giving it special training. Even if the fault seems to be in a whole movement, this does not imply that additional work on that movement will improve the condition. The fact that there is a weakness in PART of the action will prove a detriment to the whole, and unless this single weakness is subjected to isolated treatment, the improvement will be negligible.

From the consideration of this problem W. A. Pullum devised what he termed assistance exercises and these are now wrongly termed Power Movements. Admittedly some of them are in the latter category, but not all of them. Many are meant to improve a lifter's style, some his speed, and others his coordination.

What is the basis of such movements? Briefly it is this. First the weakness must be pinpointed. Then, whether the faults be in power, speed or any of the other factors, all assisting contributory actions are eliminated so that full concentration can be given to the specific part.

When it is merely a matter of the promotion of power the result is a simple action where the work is directed onto the muscles concerned, but when the other factors are at fault some fairly complex movements may be necessary. I touched briefly on these movements in the third article in this series dealing with the Press. Two movements mentioned were Seated Press and a further movement, the Half Press.

The Seated Press is a good example of promoting power by cutting out all contributory action. In this position any lay-back or body thrust is virtually impossible, so consequently all work is done by the muscles directly involved.