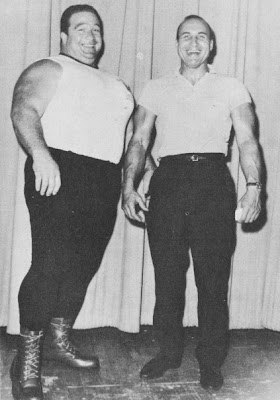 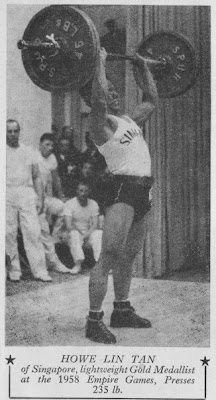 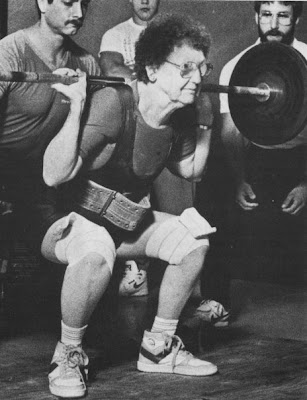 Training on the three Olympics, Press, Snatch and Clean & Jerk is best done in the order given if all the lifts have to be done on the one day. This may not be necessary in the case of (1) lifters who train above three times each week, or (2) lifters who are exceptionally proficient on some of the movements, but need additional training on others.

If you have to confine yourself to less than four days’ training each week, you will have to do a more concentrated workout than the man who trains more often, and all the movements will have to be covered if you are not already an adept performer on some lifts.

There will not be space here to deal with every possible case that could be conjectured, so I will confine myself to the more probable circumstances, and let each individual modify the advice to suit his own particular changing circumstances.


Schedule for the Average Performer

I shall take it for granted that the reader has some experience in lifting (if this is not the case, you will be better off first spending a few weeks on the individual movements before attempting a programme on the whole), and as I presume the average performer trains three times weekly, this first schedule is meant for such a person.

This means exactly the man of some experience (with no particular aptitude for any lift) who trains three times a week must utilize this time to the best possible advantage. As I said, not being outstanding on any movement and wishing for all round increases, he must cover all the lifts. But he must also take care not to make his schedule so stereotyped as to cause boredom.

By a little thought this can be avoided, and at the same time preference can be given to the lifts that need more effort for progress. “Assistance Exercise” for the development of power can be used also to give variety. I suggest a schedule based on the following lines, to be done for a period of 2-3 months, after which the performer will be able to modify the same to meet the requirements that result.

You will see that the Press is very prominent, being done every workout is some form. This is because it becomes hard to progress on this lift once a certain standard is attained. When experience proves this point as regards other lifts, a similar procedure can be adopted to cover this contingency.

Keep similar movements apart from each other; as, for instance, when doing the Two Hands Press and Bench Press it is best to do other movements in between, so as to give the muscles chance to recuperate. This is a point to note even when doing ordinary training as well as in this special instance.

Progression is made by adding to the number of successful single attempts until 2 additional singles can be performed on any movement. When this is accomplished a slight poundage increase is added to the bar for every set of that movement, and the number of single reps revert to the original figure.

Friday
Schedule and progression as for Monday.


As will be seen, this schedule contains a lot of concentrated work, enforced by having to cover all the lifts in each session. The reps laid down are adhered to as near as possible, but the important point is to be WORKING TO MAXIMUM.

For instance, if you complete a set of reps and find you are not extended, the weight should be increased on future occasions, and, by experimenting, a suitable poundage base will be arrived at. If, however, you adopt a poundage which causes you to fail on a FINAL REP ONLY, this is quite satisfactory, and proves you are working to limits. In this case DO NOT DROP THE POUNDAGE to enable you to get the full reps laid down, but progress from this point as advised.

At the end of the 2-3 month period, you should be in a position to “take stock.” Perhaps your natural aptitude for a certain movement has permitted increases beyond the other lifts? Perhaps the technicalities of the lifts fall short of perfect? Perhaps you find that with a little extra work on one of the quick-progress lifts, you can attain the required poundage?

In cases like these the schedule can be modified by easing off on the more successful movements and doing additional work on others, keeping to a similar system in the process. Do not, under such circumstances, attempt to change the nature of the schedule by doing a lot of reps, but rather cut out the successful movement on one evening, and substitute as assistance movement for another lift in its place.

A little thought in this direction will keep the work interesting and the progress in motion.

Some lifters are more fortunate than others in having access to a club on more than the usual three evenings a week, and in having time to take advantage of this. Such state of affairs can lead to the training being evened out more, and the work done on any one night not being as concentrated.

Even if only the same amount of work (as done in the previous three-day schedule as a whole) is spread over a longer period, better results can accrue because of the opportunity to plan better; and there is, of course, the chance for the really energetic performer to extend his range of movements.

In the first schedule given, one is forced to do a routine of this nature in order to get sufficient work done in the given time. But with more training time at one’s disposal, the overall work can be broken up, and if required- and one’s energies permit – additional exercises can be added.

The main point about training for anything is working to a plan – a plan that results in maximum achievement. Your first thought should be to establish a base for your endeavors, and then adopt some gradual system of progression, similar to the one given in Part One. To train haphazardly by going through a series of movements in any fashion, and without thought to the end product, will, in most cases, do some good. But it will not bring you the best results, which is, after all, what you desire.

It pays to give some time, in the initial instance, to experimenting with poundages so as to get a basic schedule that gives you maximum work. Only by doing so can you be certain – when the time comes that you show increases, either by additional reps or poundages – that you are improving.

You will realize by this that the bulk of the planning depends upon your own initiative, and the knowledge of yourself derived from experience. An advisor can only give basic facts and ideas that are universally applicable, in the main, and it is up to you to build upon these and modify the results to suit your own purpose and personal individuality. No two lifters will have the same aims, no two lifters will have identical abilities.

Here are some SUGGESTIONS for schedules to meet the various contingencies. They are meant for the lifter with ambitions on the scheme we are dealing with, but the basic idea in construction of the schedules, and the progressions, can, with thought, be adapted to many other circumstances.

This is for the man who wishes and is able to train four evenings per week, and is built on similar lines to Schedule One. It is impossible to train four times weekly without having two consecutive workouts, unless you train different days each successive week. This is important, because the rest period between training is a matter for deep consideration, as also is the variety of activity. The possibilities of planning outside of a seven-day format are also worthy of consideration.

If you train alternate days, e.g., Monday, Wednesday, Friday, Sunday, then you come again to Monday, giving you two consecutive days, unless, a I said, you vary the training days every week. As this is, in most cases, impossible, the training must be planned on other lines.

I suggest that you adopt a system almost similar to the first schedule given, but with an additional day on the assistance exercises, and do them in different order, as follows.

This does not seem to be much different from the procedure of training every other day, but it has the advantage of leaving the weekend free, and the rest days follow the heavy training days. It will be realized that the above gives more work to the performer than that of the three days of Schedule One. If it is felt that such efforts would be too severe, the amount of work done in the first schedule can be adhered to, and the movements changed in order.

This is exactly the same amount of work as originally planned for three days, and is broken up to equal the efforts to the best advantage. Progression is made exactly as recommended in the previous instruction, and naturally, the same applies to Schedule Two.

Enthusiasts who train five days weekly could adopt a similar procedure to the above by either (1) keeping to the schedule as a whole and modifying it even more to spread it over the longer period, or (2) if extra work is required, doing three full workouts on the six lifts on the lines laid down, with two days on assistance work.