Goodbye To The Press - George Kirkley 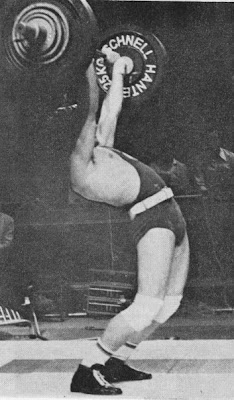 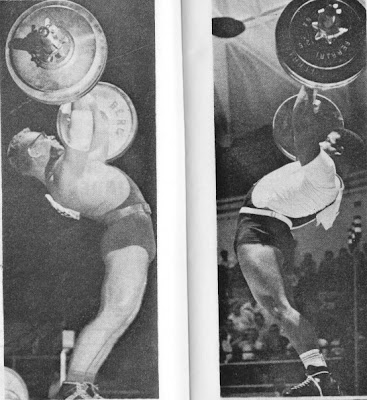 Goodbye to the Press
by George Kirkley (1972)

The most controversial aspect of Olympic weightlifting came to an end when at the Munich Congress last August the IWF decided to delete the Press from its competition programme. And as there was no suggestion to replace the lift with another one, we now have a schedule of two lifts for the first time in the history of international competition.

The International Weightlifting Federation was formed in 1920 with its headquarters in France, and the lifts at that time were the One Hand Snatch, One Hand Clean & Jerk and Two Hands Clean & Jerk. The Two Hands Press and Two Hands Snatch were added in 1924 to make a five lift set, but by 1928 the single handed lifts were dropped to leave the familiar Press, Snatch, and Clean & Jerk, which have stood until 1972.

So the Press has been with us for 48 years, but obviously something had to be done about it as the situation had become completely out of hand.

When I first came into weightlifting in 1928, the lift was named the Military Press and had to be performed in “Military” style – that is, standing strictly upright, heels together with shoulder-width grip and no body movement at all being allowed. In fact, the barbell had to be first pressed forwards from the top of the sternum in order to get around the face before being pressed overhead. The shoulders were not allowed to be taken back so that the barbell could be pressed vertically.

Gradually, however, the rules began to be relaxed. The feet were allowed to be placed apart, the grip could be widened, and while the rules still insisted on a military movement, the referees also began to relax and allow a slight layback. Later a layback was allowed provided it was not “exaggerated” (whatever that meant!) which immediately left open this issue to the various interpretations of what was exaggerated. We then had a situation where some referees were allowing huge backbends according to their own ideas.

Then another maneuver was tried by the lifters and coaches – a slight unlocking of the knees followed by a vigorous re-straightening to give a little impetus to the pressing movement and a few more pounds on a top lift. Again there was a further relaxation of refereeing standards to encourage this practice.

Afterward came the bow-style Press together with a plea from its supporters that the lifters were performing an “athletic” movement which was a good thing for the sport.

Finally, the last straw was a lift performed with an accumulation of several faults – a dropping of the barbell at the chest together with a distinctive knee snap and, with some lifters, a huge backbend to get the weight overhead.

With more and more referees allowing this travesty of a lift, it became almost universally accepted, but was still accompanied by controversial decisions. By now, of course, the Press had lost all resemblance to the original military movement and in many cases was almost a power-Jerk.