Note: There was about a year of PLUSA issues before Doc Ken got back to this subject. He describes some training that was done with Ray Rigby. This can be modified to suit your needs, and although it may not seem like a continuation of the previous article, well, you know. 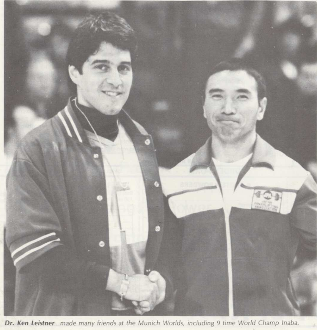 I have to admit that we spent a great deal of time B.S.ing once Ray arrived. In retrospect, all of the conversation, other than that related to maniacs I have known, etc., was constructive and beneficial.

The first order of business was training, but that needed some planning, and post session evaluation, so much time was spent hunkered around the kitchen table, most often with food laden plates before us and admonishments that "the two of you are gonna get fat" ringing in our ears.

Ray has been training twice per week for the last year with good results. Although we've thrown this around before, the logic behind this approach is that if one is training hard enough and with the necessary intensity, then one needs to get lots of rest if progress is to be steady, and, for most powerlifters, if one is to avoid injury.

Also, we're involved in a sport, and the skill for that sport requires the lifting of a very heavy weight for one repetition, and while 5's and 3's will build strength, they will not in most cases prepare you for maximum single attempts, thus we emphasize lots of singles, although few of these are limit or maximum attempts.

I once mentioned a study done in Bulgaria noting that any competitive lifts done with less than 80% of maximum weight did not resemble the lift done with close to max weight, when measuring motor patterns and other physiological variables.

One may not do well with a steady diet of singles, but singles at 80-90% max must be done on a regular basis to develop the skills necessary to powerlift competitively.

Same for the suit and wraps. You need to lift in a suit, not your tightest suit but a suit none the less, a good deal of the time, not only in order to get used to it, but more importantly, to develop the skills needed to squat in a suit come meet time. Wearing a suit for three weeks prior to a meet may be fine for some, but the average lifter would do much better to use his suit often, at least once every three or four weeks in the "off season," and once per week in the 8-10 week period prior to a meet. This we did.

Earlier in the year, Ray squatted twice per week, and continued to do so right up to the World contest.

A suit was worn on the heavy day only, and it was put on after the first three warmup sets.

On Ray's first heavy day here in New York, he went up to 837 and it was done explosively, with the slightest break in form. Ray twisted a bit to his left but powered it through, much to the relief of the four of us spotting the attempt.

At all times, he was in control, and this too comes with training two times per week. If you have to get it up mentally three to five times per week, I honestly believe that you lose your edge. If you only have to go heavy once or twice per week, the disciplined lifter should not have trouble controlling the weights, and controlling the tempo of his workout. And remember this; once you're in a meet, if your mind is right, you will be on automatic pilot. You will do what you're used to doing. If you're used to doing everything right, with confidence and concentration, you'll most likely do it. If you're a bit beat most of your training time, and you often can not fully lock in mentally, don't expect miracles on meet day.

I squat a bit differently than Ray,in that I only go once per week. Ray, too, has bad knees, but I insist on pushing my legs through a bit of cardiovascular work most of the time, so my knees are usually tender. Although Ray takes scheduled lengthy walks for his cardiorespiratory improvement, I run, row, and sprint for the subway daily, thus, my chronic chondromalacia patellae and tendinitis are active 90% of the time.

I squat only on the Saturday, or heavy session, and will go for 5-6 reps early in the year, and then singles or doubles as a meet approaches. I will often take a backoff set of 8-15 reps, depending on the state of my knees.

If I squat two times per week, no matter how light the other day is, I'm limping after perhaps three weeks of this.

Typically, I'll take 154 for two sets,and at times, three sets of 6 reps to warm up, then go to a triple with 220-242, and go immediately to singles, finishing with my top single or double for the day.

If it's early in the year, I'll do the same bunch of singles, and go to 6 if that's my top set, but I'm of the belief that you need to save it for the big one or two sets of the day, and my knees are a constant reminder to limit the work.

For assistance work, Ray's early season program included a light warmup set, and then one or two heavier sets of leg curls and calf work. I never do anything else for my legs/squats, primarily because experience has shown me that my knees can't take it. That's reality, baby, and I'm less happy about it than most, but I enjoy walking too.

For most, a few leg curls and calf raises will be fine. I do standing calf raises on a regular basis because they involve more tissue than the seated variety, and because I'm determined to get my calves over 14.5 inches. All really small and/or short football players are assumed to have big thighs and calves, the belief being that they would not have made it otherwise. Being the exception to that dictum and wanting to add a little symmetry to my 25 inch thighs and 13 inch calves, the calf machine raises have served the dual purpose of filling out the leg while establishing a stable cushion for the squat.

Both Ray and I have done lots of crunches on squat days. I've harped about the importance of abdominal work for lifters, and the stability given to the torso, but it makes no sense to do these prior to squatting or DLing. If you weaken of fatigue the ab area before loading on the weight in the competitive lifts, you have got to suffer for it. After the squats we do some crunches or other rectus abdominus work, and after DLs, it's side bends, which for me means doing them on my "other" or Tuesday training day.

Ray had never done ab work before, and after a year of crunches and side bends, and an increased awareness of diet, found himself more steady under heavy weights when squatting, enjoying a drop in bodyfat percentage, and having fewer lower back problems throughout the year.

Ray DLs twice per week, although the Tuesday session is no more than a few triples with 220. On his heavy day, again on Saturday, he follows his heavy squats and benches with his heavy DLs. His attitude echoes mine in that one has to squat and DL together on meet day, so get used to it in training.

Even with the rotation method or abbreviated cycles the squats and DLs are run together, so that the low back, hips, and thighs can get maximum stimulation, and then maximum rest.

Early in the year, the reps are higher, but I never recommend more than 4 or 5 per set because most lifters have technique breakdowns while doing reps, most often bouncing the weight from the floor, failing to set up properly at the bottom, or rushing the reps and failing to come erect at the top of the lift.

As the meet approaches, Ray will single. I like to do a few (2-4) singles with perhaps 30 seconds to 1 minute rest between them as my top "set". I believe this will give a very good conditioning effect specifically for the DL, and Jim Cash originally influenced me with this idea.

For a good part of the training calendar I will do my squats on Saturday, and do my DLs on Tuesdays. This has to be done for part of the year if my knees are to hold up to consistent training. Eight weeks before a meet, I will do the squat, bench, and DL together on the heavy day, and will do no other DLing during the week. Thus, I squat once per week and DL once per week, but might do them separately to preserve my knees.

For most lifters I would recommend laying the base for the really heavy work by splitting them as this allows you to do a very hard backoff set for 6-12 reps in the squat after the heavy ones, and an assistance exercise or two for the back, if you need it, after DLs.

If you squat heavy, take a wicked backoff set and then try to DL heavy, man, you will have difficulties and don't plan on a big night out following the workout. Warm milk and an early bedtime are the doctor's recommendations for that one, and don't expect more than three weeks of progress before caving in. Thus, when Ray was here I did not take my customary backoff set in the squat, because the heavy squats were followed by heavy DLs.

On Saturday, our last heavy day prior to the Worlds, and our last workout together, it went 220 x 2, 319 x 1, 407 x 1, 507 x 1, 573 x 1. I stopped here as I had not been pushing really heavy weights in a long time, and did not want to risk injury. if I was going to go heavier, my jumps would have differed a bit, but gthe sets still would have been limited to 5-6, as I do not believe you need to be lifting too many DLs in training, especially if you squatted heavy immediately before.

I follow my DL workouts with side bends, heavy, for 2 sets of 15 reps to each side, each side being worked for the required reps before working the other side. I have found that doing heavy side bends is great for torso stability, but it kills my obliques to the point that I don't DL well if I do them two or three days prior to pulling. I also follow DL workouts with calf raises, and thus wind up working this bodypart two times per week, and honestly, in an effort to make it up to the coveted 14.5 mark, I occasionally wander into the garage for an extra session during the week. Actually, I'm exaggerating, my calves are almost up to gthe 14-5/8 mark.

Next month, we'll examine the bench press and our workouts leading up to the Worlds. I'm often accused of avoiding discussion on this lift.

Bill Starr has told many people that my benching ability has to be seen to be appreciated, but four major pec tears have taken the stuff out of my previous gym best of 455 and meet lift of 435.

God, there are days when I can squat that and it seems that it was in another life that I actually was able to bench more than 330 or so.

To compound matters, one week ago I tore the tendon of the right pec minor from the humerus, one of the more painful lifting injuries I've ever had, and certainly one that will shelve my bench press for a while, so I'm in no mood to get into that one.

Once we do get through a benching discussion, we can put a full year long program together, and that will satisfy the recent requests for a long term approach to that kind of training.