Thanks to Liam Tweed! 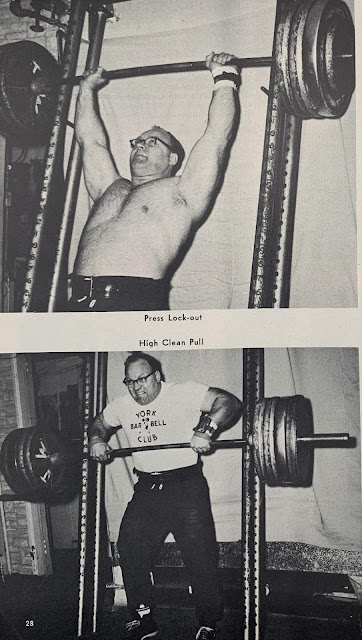 Norbert Schemansky will go down in weightlifting history as one of the all-time greats. He has proven to the sports world that champions can be 40 years old and still reign as king. Some veterans of the game probably will express no surprise if the heavyweight from Dearborn, Michigan is still lifting competitively at the age of 50.

He is one of America's best hopes to win a medal at the Olympic Games in Tokyo. In a recent meet, Schemansky totaled 1,200 pounds, but his lifts may go unrecognized as United States records because he made them as an extra lifter at a Michigan State Teenage meet.

Nevertheless, all of us in the weightlifting world are proud of his efforts and it is only a matter of time when he will officially knock down the record. However, Skee is still 31 pounds away from the world's record recently broken by Zhabotinsky in Russia. Fellow Russian Vlasov held the previous record at 1,229 pounds.

From Schemansky's long years of training and experience, we figured many other lifters could learn something from the granddaddy of the modern contestants.


"Did you ever figure on competing in four Olympic Games after you made the team in 1948 for the first time?" I asked Schemansky.

"To be honest, in 1948 I said to myself that I would attempt to win places on four Olympic teams. My back injury in 1955 interrupted my schedule for a while, but now I have to make it to Tokyo to fulfill my goal. My chances are now as good as anybody's," Schemansky replied.

"What advice would you give to younger lifters? What are the essentials for lifting success?"

"Determination is important. Persistence is  must. Of course, you must be willing to accept the challenge that lies immediately ahead. For example, all through my lifting career it seems there was always somebody who was supposed to be better than me. The list is long. It goes back to 1948. There was Gregory Novak, John Davis, Jim Bradford, Paul Anderson, Dave Ashman and now two more Russians, Vlasov and Zhabotinsky. After all these years of lifting only the two Russians of modern vintage are still in the game. The others are on the sidelines. And barring injury, I feel confident of eventually passing the two Russians as well," Schemansky explained.

"With that kind of confidence, Skee, you ought to be right up front fighting for a Gold Medal."

"Let's put it this way. Vlasov once told me that no one can beat him because he has an ace in the hole, the clean and jerk when he needs it. Already Zhabotinsky has gone ahead of him. We will see. Remember I am of Polish descent. I am an American and proud of it. Everybody knows that a man with Polish blood in his veins never gives up without a battle and an American accepts all challenges no matter how big or small. I am not conceding anything at the moment. I do not mean it to be boastful. However, I am not giving away my rights to try to be the Gold Medal winner at Tokyo in the Fall, so the Russians and all others might as well take not if it right now," Schemansky warned.

"What kind of training plan do you have as the Olympic trials and Games approach us?"

"As a contest gets closer, I eliminate more and more power and substitute it with more and more Olympic lifting. Approximately eight to 10 days before the meet I eliminate all power exercises. During the last two or three weeks I concentrate entirely on the lifts," Skee answered.

In 1952 he was named Mr. Michigan. He was All-Detroit shotput high school champion.

Here is an average week of Schemansky's training schedule:

Olympic lifts up to 90%, concentrating on form, style and speed.
Squat.