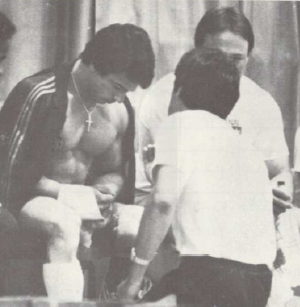 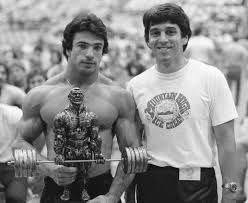 
In last month's PLUSA there appeared an excerpted piece from Dr. Fred Hatfield's new book, Power Training, sure to be a classic.

Most readers know a bit about Fred's background, his outstanding acccomplisments as a gymnast, physique man, Olympic lifter, powerlifter, and his PhD . . . truly an innovative and intelligent gentleman.

Besides encouraging everyone to buy his book, which I'm sure will be phenomenal, I'd like everyone to again read his article "Heavy Training" from last month's issue.

As so many people pointed out, via letters and phone calls, Fred has said very much what I have been saying in this magazine for the last four years. Fred certainly has a stronger theoretical background than I do, but some  of his points are so clearly self evident truth that brief amplification will show the the light to some of you who have been floundering.

One of the most important things re: training, especially for competition, is the realization of genetic/hereditary limitations. The bottom line that most of us are never going to be truly great, in comparison to all the other guys out there. Hey, that's how it is, and because of this we can't look to the routines of the greats or name lifters and go through the same motions.

If hard work and dedication were the only answers, any one of us could name ten guys in their area that should be National champion, but who have yet to reach Class I

The next point relates to time spent in training. It's probably related to the American ethic of hard work: long hours equals success. But in the sport of powerlifting, rest and recuperation time, or perhaps, the avoidance of running down one's recuperative abilities to nothing, is possibly as important, or more important than the actual method of training. You don't grow or get stronger while you're lifting, but rather, while at rest, and it takes 48-72 hours for the body to make those biochemical changes necessary for increased gains in strength.

Fred's article asked the question, why take a light workout if benefits only come from the heavy ones. The only justification ("everyone does it" as Fred said, is an answer, but certainly not a justification) is that the light workout may prevent atrophy. Note, it's not for growth, but rather to prevent atrophy, which will be in evidence after 96 hours without overload training (or without such training to maintain existent tissue). There is no physiological basis for training more than two or at most, three days per week.

I correspond with a number of people, and one of them is a well known Olympic lifting aficionado and participant. Let me give you some excerpts from his recent letter and relate it to this discussion:

"Powerlifters should keep their minds open to the wealth of information Olympic lifting has inspired. Our sports have just too many similarities for one to disregard the findings of the other as Dr. Leistner suggests."

"Powerlifters are already benefiting from emulating the cycling principles of top Olympic lifters."

Yes, our writer feels that in past columns I have made the statement, or at least given the impression that we should ignore the findings of Olympic lifting as it applies to our sport.

First of all, information can be gleaned from all activity, Olympic lifting, gymnastics, swimming, etc. that will benefit the powerlifter, so my statement was certainly not a blanket one. I do believe that the sports are totally different and thus, there has been an overemphasis on what the "Russians/Bulgarians etc." are doing, and its attempted application to powerlifting. I think Olympic lifters should be emulating powerlifters.

The Eastern European approach is absurd for our lifters, and to take their findings which come from a highly select and trained population and even apply them to Olympic lifters is ridiculous. to apply it to our powerlifters is worse.

Perhaps our Olympic lifters, who have accomplished little by attempting to emulate the Russians et al, should be taking a hint from our powerlifters and limit their training to that necessary to improve their skills in the two lifts, and than, train for the ultimate in strength, as powerlifters do.

Why should the PL community suck hind teat to the OL boys? Hell, we're the leaders of the band in world PLing; our OL guys should be looking to us, not some six day per week schedule formulated in East Germany; one that no American will benefit from in the long run, not if he's married, working, in school; any or all of the above.

Almost every Olympic lifter I know or know of grossly overtrains and the results show it. My reader ought to be looking in other places for his training information, perhaps to the U.S.A. powerlifting community, and apply those findings to Olympic training. We don't need the problems they have and to suggest that our PL community should look to the Soviets for training advice, especially when (and I repeat) the sports are markedly different, well, it's not good advice and I'll leave it at that.

Fred is right. The heavy, intense work brings growth in strength and tissue, not the light workouts. Fred also defines heavy as "doing the appropriate number of reps with a weight that is heavy enough to make you fail if you go beyond the required number of reps." This too should sound familiar.

Perhaps I have suffered from my former association with Nautilus Sports/Medical Industries, but I've been talking about limiting work on an exercise to one, or at most two heavy sets per workout, and then "going to failure," or in other words, going to the point of maximum effort with it, as does Fred.

I think many readers, my Olympic lifting correspondent among them, have associated a minimal warmup and going all out for your specified reps for the day, with the typical machine workout of one set to failure on twelve or fifteen exercises. Hey, we're talking about two different animals, although the theory is the same, and it's as sound as you want.

Limiting warmups cuts less into overall recovery ability, and hitting one or two at most heavy sets in the lifts will give you all the growth stimulation you want. I've had guys say, "I do ten sets an exercise all out each workout." If you go all out, no way can you do it for ten sets. One set, sure, two maybe, more than that and I suspect your definition of all out isn't the same as mine, and isn't the same as the physiological standard you have to meet to grow; perhaps the ultimate explanation for the plaintive cry that "I tried it your way and it wasn't enough work.'

Fred's point that most guys are in the gym more than then need to out of guilt (again, the ethic - more work more often, more muscle, more trophies) if right on. Fred's suggestion to go heavy all the time, but limit "all the time" to once every 3-5 days is physiologically correct and in past columns we've described a number of ways to do that via the rotation method, or two a week schedules. I'll detail these next month, and continue with the bench pressing discussion, but twice a week seems to work best for most guys, and if you don't need to have a regular type of schedule and can train on any particular day, Fred's method is great.

In either case, the typical Olympic lifting method of being in the gym five to six days per week for strength work, technique work, explosive work, form work, etc., is so much crap.

And I'll stand on another statement I made a while ago that the sports oriented research from "over there" isn't quite as sophisticated as we have been led to believe.

Oh yeah, one more thing: If you were in the shoes of the powers that be in the sports establishments in Eastern Europe, would you really give away all your secrets?

"If it worked, THEY would have used it."

What makes you sure they don't?