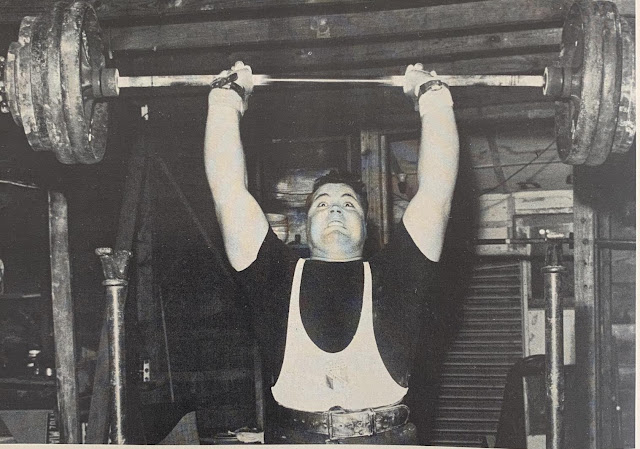 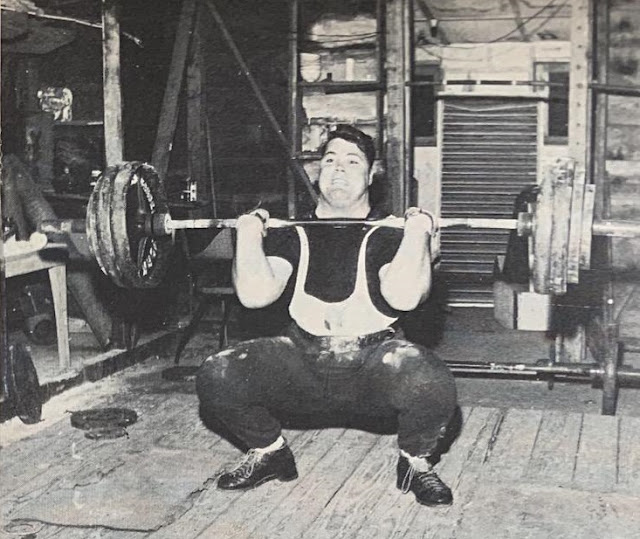 
Joe Dube Jr. is still a comparative unknown in the competitive lifting ranks, but he is going up the ladder of success like a man in a hurry.

No one, including Dube, expects to hear his name called out when the U.S. Olympic team is chosen for the trip to Japan this Fall. But watch out for this young fellow in the next four years. He could be the successor to veteran campaigner, Norbert Schemansky, in the heavyweight ranks.

Less than a week before his 20th birthday, which fell on February 15, the 283 pound giant pressed 400.75 to break the Junior World and National Teenage records.

Dube will face strong opposition from Schemansky and Sid Henry in future national contests, but no one questions that he is destined to go far in the sports world.

We talked to young Dube, a supply clerk for Independent Life and Accident Insurance Company, in Jacksonville, Florida, about his success to date and training techniques.

"First, Joe, congratulations are in order on your fine press on February 9th. What are your goals," I asked him.

"If you succeed with a 1,200, of course you will be even with Schemansky, who recently became the first American to hit that mark. What are your best lifts at the moment?"

He figures on letting his weight reach the 305 pound mark.

"Joe, tell our readers about your personal and lifting career. How did it all begin?" I asked.

Dube, starting at the beginning, stated:

"I was born in Altha, a small town in West Florida. My family and I moved  to Jacksonville when I was two and we have lived here since. In 1958, at the age of 14, I took up smoking and weighed only 135 pounds. I gave up smoking when I started lifting weights that same year.

"After I started bodybuilding, I gained strength rapidly. In six months I weighed 160 pounds and started on the Olympic lifts, gaining up to 170. Terry White, a friend, encouraged me all the way.

"In February, 1960, I entered my first contest, the Duval County meet, at a local high school. I was in the 181 pound class with a 635 total. Shortly after it I won my first state meet in Jacksonville with a 670 total in the same class. I started gaining weight again and soon weighed 190. I started playing football and participated in track and field meets in high school. I ran the 100 yard dash in 10.5 seconds and the 220 in 24.6. I gave up these sports for weightlifting and began training harder. I raised my total in the 198 pound class up to 835 (one of three Florida state records at the time), then went to York, Pennsylvania, for the Teenage Nationals. The trip was hard on my, however, and I missed first place by 20 pounds, only totalling about 800. After my first attempts, I couldn't do any better.

"I gained more weight and brought my total up to 990. I didn't gain very much the rest of that year but early in 1963 I really went to town gaining weight and training harder than ever. I made my first 1,000's in the Florida State meet where I lifted 1,025 pounds. My lifts were 345, 300, 380 at 252 pounds bodyweight. In the Senior National championships I weighed 262, and made only one press and no quick lifts.

"The Florida A.A.U. paid my expenses to the Senior Nationals at Harrisburg, Pennsylvania, in June, 1963. It was an inspiration to meet the top lifters in the country, despite my experience in the contest. A week later in a meet in Jacksonville Beach, I made 355, 305, 390 for a 1,050 total. The snatch is still my best, but I am going to really work on my pull.

"In November, 1963, I entered the East Coast meet at Savannah, Georgia. In this meet I lifted 380, 300, 390 for a 1,070 total. The lifts were actually five pounds heavier in each case. The officials weighed my press at 385. The next contest found me breaking the then Junior World Record press with a lift of 389-1/2 pounds. It was held at the Jacksonville Beach Civic Center, November 30, 1963.

"My present goals, as the way things stand, are to break the junior world records in the heavyweight class and possibly break the world record press held by Vlasov. I would also like to represent my country in the Olympic Games this fall at Tokyo, Japan. I'm really going to train hard for it. I have no big doubts or fears when I train or enter a contest. I think only of timing and bullet speed. I always try to plan ahead, as you can see. Timing, speed and planning are important factors in any sport. I eat plenty of meat, drink plenty of milk and eat lots of vegetables."

"What is you training schedule?" I inquired.

"My training schedule is basically power work with special attention to the three lifts. Squats, supports and high pulls and push press and my main power lifts. I change my program from time to time. I train four times weekly: Tuesday, Thursday, Saturday and Sunday. Here is the way my three lifts are done most of the time?

1) Clean and Jerk, power push (or start press, driving for above head).

4) Also do Isometric Contractions at times after workouts.