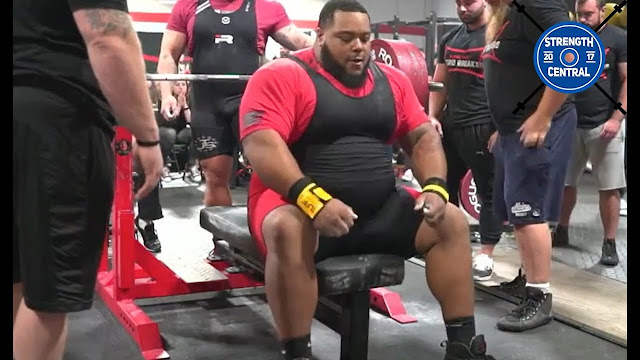 Julius Maddox knew that he was a bench pressing prodigy when he and his buddies, who were in a treatment facility for drugs and alcohol, loaded up the bar with all the weight that the center's basement gym had and pressed.

"We were just joking around, and I moved it for reps," Maddox says.

Since then, Julius has hired a coach, and with proper programming he has worked up to a world record Raw (only belt and wrist wraps) bench press of 739.6 pounds.

So we asked the world's baddest bench presser to lay out a bench press masterclass. Whether you're just a newbie or a vet pushing four plates a side, it would do you some good to heed Maddox's advice.

A big bench, according to Maddox, starts with foot placement. "A lot of people I see are bouncing on their toes as they bench," he says. "They're not stable." The first step to setting up correctly, according to the world record holder, is to place your toes firmly on the ground behind your knees. "You'll get leverage, you'll get leg drive, and you'll be more stable," Maddox says.

SQUEEZE YOUR SHOULDER BLADES! - Most guys think of just their chest as the main driver in a bench - and it is - but your back plays an equally important role. For one, retracting your shoulder blades helps keep your shoulders stable and activates your lats.

"Your lats store elasticity when the bar descends," Maddox says. "Your muscles are like a rubber band. That's why I'm so explosive - I do 10 back variations a week."

Once your feet are in position, the next step is to situate your torso onto the bench in the correct spot. Maddox grabs either the bar or the sides of the bench and arches his back onto the middle of the bench, with his feet still planted firmly on the ground and behind his knees. He slides his torso toward the bar until his eyes are underneath it. "I call this locking in," Maddox says. Once you are in place, stay in place.

At this point, your feet are on the ground behind your knees, your lower back is arched, and your eyes are underneath the bar. "From there, you find you hand placement," Maddox says. "Personally, I like to go shoulder-width apart, where my pinkie is on the ring of the knurling, but everyone is different."

To find what's comfortable for you, Maddox suggests starting with your hands at shoulder-width and then moving them an inch in or out until it feels right. Though it's mostly a feel thing, Maddox says that you'll know you've hit your grip sweet spot when "the weight feels evenly distributed, and it feels like you're utilizing all your muscle groups."

4) Stay on the Right Path

Well, bar path, that is. When pressing a bar loaded with weight over your chest, it's important to not let it jerk out of place. This can lead to shoulder impingements or, worse, dropping it on your face. Maddox likes to press the bar in what he refers to as an "exaggerated J" motion.

With the bar starting over his eyes, Maddox lowers the bar to right beneath his chest, pauses for a beat, then drives the bar up and back so it's over his eyes. This down-and-in-and-up-and-back motion creates a "J" and, according to Maddox, is a comfortable way to bench press weight.

5) Focus on Your Elbows

While pressing, you should think of your elbows as corkscrews, says Maddox. "They should stay tucked in at 45 degrees and flare out a little bit as you lock out," he says. "Think of football players when they fire off - they're pushing with their hands while their elbows are tucked. That's how they generate more power."