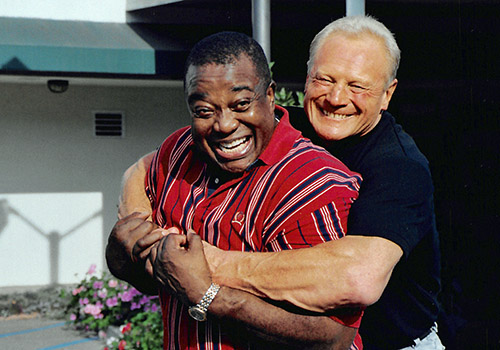 
After several decades of creating his newsletter with painstaking pleasure, Dave Draper has decided to put the pen down for now. On the off chance you're never heard of these newsy letters written with, well, you and I in mind, they're free and they're here:

"Rhymes with Marie" tells me there's plans in the land of making-dreams-real to compile . . . Compile . . . COMPILE the treasure and create a book. If you're like me, it's eyes way wide for that beauty.

You know, there's been so many days over the decades that have turned from "Hate It" to "Great!" thanks to these two, Dave and Laree. Sweetened my sour disposition, they did, and Dave's writing has resulted in some damn fine workouts along the way. It's Crazy Stuff! Man, that hand from on high helping a guy up to the next rung of the ladder. And all the while giving us the feeling we're side-by-each and same. How COOL is that!

Sorry to ramble with this, and I swear the article'll start soon. BUT . . .

How 'bout the next time you're having a top, TOP shelf workout, you'll know when it's a special One, how about picking a set and making it a Best Set . . . and inner earmarking, dedicating that One to Soul Brother Dave.

Just me, but I'm thinkin' that's something close to the best "Thank You!"
we can give the Big Guy.

I was recently astounded by a woman doing a leg workout. She was captivated by a novel she was reading as she sat on the leg extension machine with the pin stuck between the first and second plates, slowly performing the extensions rep after rep.

Each set took more than five minutes, and I could see others reorganizing their leg workouts, not knowing how to work in with this system.

It was the most blatant lack of attention to a workout that I'd ever witnessed, and it inspired me to consider the power of our concentration toward our workouts and to write this article.

The scene affected me more than it would have had I myself been applying better concentration, which reminded me of our effect on others in the gym each day. My best workouts come on unexpected days when there's unusual energy in the gym or when I train at World Gym, Venice, during my occasional trips to Los Angeles and I bump elbows with Arnold, Tom Platz and a long list of other favorite bodybuilding friends. My worst workouts come not because I'm overtrained, sore or tired, but when I'm unable to concentrate and notice the pump.

On this particular day, I became annoyed due to another's workout, and my attention kept reverting back to the audacity of reading a book while using the weights. I allowed myself to be distracted, which caused increasing lack of enthusiasm toward my workout.

Men and women, when we're in the gym, we have to remember that our attitudes and our actions affect others. We should be able to use this knowledge to help create an enthusiastic energy - at the very least to not slow others down or break their concentration. So often I'll get a final, unplanned repetition after someone nearby gives me a "Come on, Draper." I'm not suggesting that we look to others to inspire our training, because I'm convinced that all champions, all winners in any area, are motivated from within, but I love it when I get a burst of enthusiasm from an unexpected source.

To realize the full power of each workout, we must fully concentrate on each rep of every set. This includes our aerobic training as well. I spend most of an hour a day on a Lifecycle, and nearly always it's without frills - no TV, no book, no tapes. I occasionally listen to tapes, usually during times when I notice I'm busy and behind on study or when I want to be reinspired by a pastor's sermon. Sometimes I need the beat of music to get me going, but more often than not, I spend that hour thoughtfully training, pressing on and on.

I doubt that it's possible to calculate how much more you get from this type of concentrated training, especially aerobic work, but if it's a mere 10 percent, isn't it worth it? And if concentration reaps an additional 10 percent gain on your biceps, who wouldn't want to practice this daily? I'm willing to say that most of our leading bodybuilders and lifters would put a much higher number on the percentage, probably closer to 30 percent, during weight training.

Concentration makes our workouts harder. Letting your mind wander, you can finish a set of biceps curls barely noticing what you've done. Using the same weight but adding your intense concentration can bring about entirely different results.

I believe it's possible to do a set of curls without weights that you can barely finish - if you learn to concentrate and strain. In fact, I spent several weeks in the hospital a few years ago and did complete workouts entirely without weights. I've also visited solitary confinement cells in maximum security prisons to demonstrate workouts that can be done effectively without any type of equipment.

If we know this is possible, our next step is to realize how powerful our workouts can be when we have luxuries such as weights and equipment.

If your think back on your most fulfilling workout, you'll probably discover a day when you left the gym with a tight, pumped feeling throughout your body. What inspired the great workout may not be remembered, but the cause was surely concentration.

We can bring this into our workouts on purpose, willfully attentive to each exercise. And as you practice this attention, it will become habit. You'll always have good and bad days in the gym and throughout life, but you can limit the bad and intensify the good through attention and concentration.

There's also more emotional fulfillment after an intense, concentrated workout. There's a feeling of accomplishment in the completion of the training, and because of the attention, there's no need to wonder why you did it or to question the importance of the time spent. Because of your concentration, you've increased the value of your training, and so you are less likely to miss workouts or skip unpleasant but valuable exercises.

Sincere concentration is hard, but it's worth it.

Begin with your next workout and see if you don't have a deeper pumped feeling and more satisfaction after your workout.