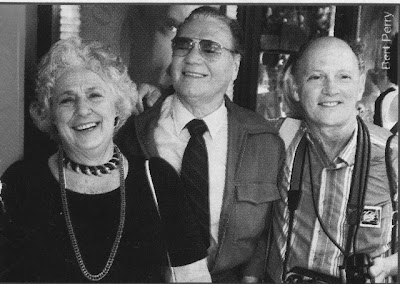 The Grimeks with Art Zeller

Select the Right Reps for You
by John Grimek (1991)


Every bodybuilder or lifter has a time run up against the problem of choosing the proper number of repetitions. This is quite natural, since repetitions do present the problem of trying to figure out just how many time to continue the movement. Anyone who has used weights knows that a certain number of repetitions produces a fullness and congestion in the muscles. Therefore, experienced persons should be more able to make suitable adjustments. But what about those who are just beginning, those without any previous experience? These are the ones who must know exactly the right number of repetitions to employ, because if too many are employed the desired results of increased muscle size and musculature does not take place, and yet, if a sufficient number is not included, the muscles will fail to respond, which is very discouraging to anyone who undertakes a system of muscle building to improve, and not to waste time.

Confidentially, however, it's not only the beginner who encounters these problems; there are many individuals with years of experience behind them who suddenly feel they aren't progressing as they expected, and who fail to obtain the reaction of congestion and fullness. This, they assume, is due to improper selection of reps, and speaking from experience, this could be so.

Too many bodybuilders these days are taught that sets, the repeating of the same exercise several times, is the only way by which the muscles can be "pumped" or congested with blood. This is true in many cases, but not everyone responds similarly. Time and again I've given examples of how some bodybuilders respond better to what could be termed as "high reps", even though such a bodybuilder can still utilize the set-system to advantage. He simply employs higher repetitions for succeeding sets. Performing higher reps in the first set of an exercise is more likely to produce a fullness in the muscle, which succeeding sets only intensify, something which is not accomplished by the majority who employ low reps, though they may repeat the exercise for many sets. Why? Chances are the heavier weights lead to haphazard methods or sloppy form, better known as "cheating", which does not impart the full resistance to the muscle being exercised. Consequently the muscle does not work as fully and, therefore, fails to congest as it should. One needs only to try this method, higher reps in the first set with lower numbers for each succeeding series, to understand my point. I have often used this method to prove m argument, and those who were willing to try it had to admit their muscle reaction was better and more thorough. One of the easiest muscles to make this experiment with is the biceps; they pump up easily when the proper number of reps are used.

If you've been in the habit of doing five, six, or seven reps, try 10 to 12 reps in the first set, reducing this down to six or eight for the second or third set, and five to six for the fourth or fifth set; if you do that many. After you've tried this, chances are your biceps will feel tighter and more congested than they have felt in a long time. Why? It is my guess that with this lighter weight you've done the exercise more precisely and given the muscles more direct effort . . . so you feel it more. It is impossible for any muscle or group of muscles to be thoroughly worked in five or six reps, even if high sets are employed. On this point at least the majority seem to agree, but scores still persist in using heavy weights with low reps right from the start. Result? Not the level of improvement expected!

Not too long ago great emphasis was placed on "forcing the reps", which advised, as the term indicated, that one should force the repetitions one way or another. Forcing extra reps is excellent to increase the endurance on one's muscles and make them work to the limit, but if this is done workout after workout results will not be obtained. Many bodybuilders catch themselves squeezing out a few extra reps all the time, which is not favored. Straining in this way puts a drain on vitality and reserve so that sooner or later one reaches a point where training is abhorred instead of inviting. Here again two versions of "forcing" might be explained. If in forcing these last few reps one must strain to the point of holding the breath (causing one to turn colors) it doesn't take much reasoning to understand that such an effort is not beneficial, but could even prove to be detrimental if carried to the extreme. On the other hand, if the effort is done with partial strain but without interrupting normal breathing or causing any facial discoloration, such forcing is beneficial and should be used, but NEVER included in every training session.

Occasionally, when one feels a desire that a few reps can be forced, since there are training days when ambition and endurance are greater, forcing a few extra reps could be utilized to advantage. However, when one hits one of those days when even the normal amount of repetitions 'go hard' and one has to use greater determination to complete them, it would be folly to employ extra reps or try to force them. Your best decision, under the circumstance, is to do what you can without knocking yourself out, reserving your efforts for another time.

One other point that I would like to clear up is that usually there are certain exercises in which almost every bodybuilder finds it easier to add forced reps without strain. These exercises differ from person to person, but one can include the "forced reps" method more often, yet never to the point of blackouts or dizzy after-effects which some experience. In all probability, if you have to strain that much, then those extra reps can't be that important, and you're better off without them.

If a novice does not know what number of reps to use, it is wiser to employ a higher reps scheme, which range between 10 to 12 for all upper body exercises, and 15 to 18 for the lower back and legs. In this way they should benefit by this system and make changes only when it feels fit to do so. Rarely, if ever, is it advisable for any beginner to incorporate multiple sets for any particular exercise. This could prove a disadvantage in the quest for improvement. Muscles unaccustomed to any systematic training respond wonderfully with only a minimum of effort, and only require greater effort after they have been toughened up with previous training.

When we speak of getting 'into condition' we mean that we must tone muscles that have lost their elasticity and power, and that are very often covered or enveloped by fat. To condition them it is better to use only a minimum of resistance while placing emphasis on the reps. By using higher reps, the muscles regain their tone, strength and elasticity quicker, and can be strengthened by the more vigorous methods explained below. Repetitions suggested here are much the same as those for beginners or slightly higher.

Strength is best obtained through effort against the highest resistance possible, and here we find that the set or series system is best. (the set system merely means to repeat the same, or similar exercises, involving the same muscle group a number of times.) Pure strength athletes all employ this formula to great advantage. It increases their strength without them growing bigger or heavier. Here the low rep system is recommended to increase power, and is best achieved while using maximum poundages. Five to seven reps for lower back and legs (the hips and quads), with three to five reps for all upper body exercises. However, many strength athletes prefer, with good reason, to include three to five reps at most.

As a general rule, once muscular development is acquired it is easy to maintain, except in cases where "forced development" has occurred; then shrinkage of size takes place if the muscles are not regularly trained. This is what was hinted at earlier. Only if a variation of exercise and repetitions were used to OBTAIN such development can the development be maintained without too much difficulty. High reps may be used on some training days, while other days should include the low rep scheme. The high rep program must consist of 12 to 15 reps for all upper body movements with 18 to 20 for all lower body exercises. The minimum of reps for alternate training days should be 8 to 10 for upper body, and 12 to 15 for lower. This will be enough to give the muscles sufficient exercise, keeping them fit and in condition.


Reps For Use With Sets

Sets, or series of exercises, are nothing more than repeated repetitions after a pause or rest. Often this type of program is more suitable to an experienced person who has passed the novice stage and has made reasonable improvement which warrants greater effort and work. Less repetitions are used while handling near maximum resistance. For this, if one uses three sets, seven to eight repetitions may work best, but when five or more sets are used, five to six reps are advisable. However, it is best to employ a higher number of sets for the first set and then use lower reps with each successive set while increasing the poundage. This improves the musculature and packs in greater power.

Selecting the proper weight to be used with the system of repetitions that will bring results is and can be best determined by selecting a weight you believe you can handle for the desired number of repetitions. Then, if you can complete this number easily, the possibility of adding more weight is indicated. Try at least five or ten more pounds the next time. On the other hand, if you have to strain or struggle to complete the required number of reps, reduce the poundage on the bar by ten pounds. In this way you will have a starting poundage that's suitable for your strength and can increase the resistance as the muscles grow stronger. In other words, START WHERE YOU'RE AT AND NOT WHERE YOU THINK YOU ARE.


In conclusion, let me make another point clear to you: Ease your mind on the repetitions score. Don't become discouraged if you can't complete the number of reps you expect. Maybe this isn't your day, in which case content yourself with less reps and don't try forcing them. Perhaps on the following training day you will be in livelier spirits, have more ambition and greater enthusiasm, and consequently more driving power . . . then employ those 'forced reps' to better advantage at this time.