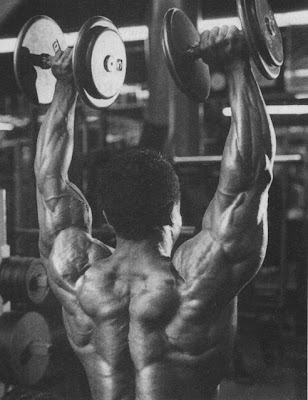 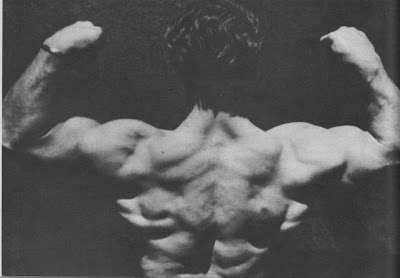 Persistence: A Must for Progress
by Bradley J. Steiner (1975)


Success, as somebody once aptly put it, is the result of 1% inspiration and 99% perspiration. This applies no matter what the particular field may be, but it is more literally applicable to physical training than it is to almost anything else. Unless you're really willing to sweat, you're unlikely to achieve much success in barbell work. Great lifters or physique men are made, not born - they are self-made via their own diligent, grueling efforts.

One of the most self-defeating - and common - things that many trainees in the iron game do is play what I call the stop-start training game, or the this-routine, that-routine training game. Perhaps you're familiar with them yourself.

In the stop-start training game the lifter spends about six hours mapping out the schedule that will turn him into the next great champion. Or perhaps he decides to follow a time-honored system such as Peary Rader's Master Bodybuilding Course. No matter; our hero somehow gets set with something he has reason to believe is an excellent course or program. And he works out diligently -- for a week or two. Then something happens.

After realizing that even the best training system on earth requires work if it is to be productive, the trainee experiences his first discouragement. Those exercises that were so invigorating and challenging during the first couple of workouts have now become an almost ominous task. It's hard work to force yourself to grind out those heavy exercises!

Magic has no place in lifting. We get what we pay for. So after rationalizing to himself, the trainee skips "just one" -- or maybe two -- workouts. Then reluctantly, he tries to resume his training. Since he's already discouraged himself, the oomph isn't there, and he is forced to reduce his poundages. He pushes himself a bit and manages to train steadily for three weeks before stopping again. "Man, this is hard work." After a layoff of maybe five or six days the trainee goes back to the weights. He trains for another few weeks, stops, then starts again, and so on, ad nauseum. Well, no wonder he's unlikely to attain any sufficient gains in strength and development. He lacks persistance.

The this-routine, that-routine game is also great sport among many who call themselves barbell men. It works this way: A trainee reads about a great routine in a new article. The schedule, the article says, in no uncertain terms will turn him into a veritable mountain of rippling muscle and strength. So he tries the routine.

Next month he not only realizes that he is no mountain, but also that he is, alas, the same rotten mole hill, and he feels disgusted. The same magazine, however, has a new and even better system next month that makes every other method shamefully obsolete -- including last month's. So the trainee, always reluctant to exercise a little persistance on a single course of action, plunges headfirst into a new routine. He tries this latest "wonder method" for a month -- until he sees another routine that's "even better" and switches again . . . and so it goes, on and and on.

Now, be honest with yourself. Which, if not both, of these games are you guilty of playing? Stop kidding yourself, friendo. You will never get anywhere with either of them. Copping out doesn't build muscles.

Persistence is as necessary as hard work for good results in bodybuilding or lifting. Sporadic efforts are valueless because the body requires steady demands if it is to make steady progress. It's a simple equation. And that is why, admittedly, very, very few men will succeed in reaching their ultimate goals. Very few people will force themselves -- and I mean force themselves -- to exercise the simple willpower that is required to continue on. They like to believe that there's some easier, less demanding way. Unfortunately, there isn't. Steady, grueling, untiring efforts -- even on only a few basic exercises -- are what ultimately produce outstanding results. Bill Pearl didn't develop his body by changing schedules whenever the whim struck him. Neither did John Grimek, Casey Viator, Reg Park or Sergio Oliva. No man on earth ever developed a tremendously muscular and powerful body without sticking to his training. It's that simple.

Of course, it's not easy to stay on a tough program of exercises week after week while continuously pushing yourself to work harder and still harder, but who ever said that it is supposed to be easy to accomplish anything worthwhile in life?

After the initial period of enthusiasm for a workout schedule wains, the fun really starts. It's up to you to grit your teeth and actually force yourself to keep at it. I think that it's about time this simple fact was emphasized. There is no magic in this world or in life. The trainee who understands this and who knows that it's up to him to keep working to achieve and maintain his physical excellence is miles ahead of everyone else. Understand that success means steady effort and you've jumped the first five hurdles on your way to achieving your goals.

Please understand that, so long as you're on an effective program, it is the effort you pour into what you do that makes it work. Here's a story that illustrates the importance of sticking to it.

I once knew an intelligent but exceptionally unathletic young man. Let's call him Bob. Bob could never muster any enthusiasm for sports or athletics of any kind, and, frankly, being a naturally small-boned person, he looked as if he'd never spent even two hours a month doing anything more strenuous than walking. When Bob was 17, he became concerned about his rather underdeveloped body. Girls were as important to Bob as books, and to say the least, he wanted very much to build himself up so he could look and feel more manly. He wanted strength and physical confidence!

Bob was quite determined to rectify his poor condition, and he asked me to put him on an exercise schedule. I did so, half expecting him to drop it midway of the first week of training. Boy, was I ever wrong.

Bob purchased a moderately heavy -- 110 pound -- barbell set. He trained religiously on the routine I gave him and more than once in the initial months of training I openly told him that I admired his determination.

As the months rolled by, Bob began buying additional plates to add to the poundages he was using. He added a squat rack and then a flat bench to his modest but effective home gym.

I especially respected him because he was one of the slowest gainers I had ever met in my life. Yet slow progress didn't dampen his ardor for progress. He managed to go from 142 to 150 pounds in three months. Today, a year and a half after his first workout, Bob weighs 176, and it's solid muscle. He has trained three times a week for about an hour each session and has only taken two one-week layoffs during the course of his brief but strenuous career with the weights. His workouts take only about 90 minutes, ad he has successfully combined them with his school work and his dating.

Does Bob enjoy training? Actually, no, he doesn't. But being a sensible, logical fellow, he feels that four or five hours a week spent at a difficult task is worthwhile -- if it enhances every other second of his life. And he feels and looks so good today that he's starting to like his training. Nevertheless, regardless of how he happens to feel, Bob trains.

Bob has followed only two different programs during his training career. They are as follow:


Bob is one example of success gained by persistent effort. Of course, everyone is different, and your own aspirations may go higher than Bob's. That is all the more reason why you'll need persistence to achieve your chosen goals.

One of the greatest things weight training can do for a man is teach him to be disciplined and to be patient. He must discipline himself to perform the rigors of his scheduled workouts, and he must be patient enough to keep working out until he begins to see the results of those workouts. And those results will be more than enough reason to keep at it.