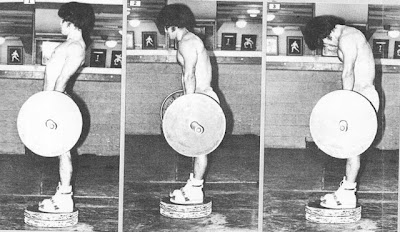 Photo No. 1: Lifter stands upright with legs straight and heels together. Bar is held with the aid of straps -- no tension in the arms -- and the whole body is relaxed.

Photo No. 2: The head begins to tilt forward and the shoulders slump with bar hanging at arms' length.

Photo No. 3: The chin is tucked into the chest -- this helps to curve the upper back. The shoulders slump even more at this point, stretching the muscles in the back. 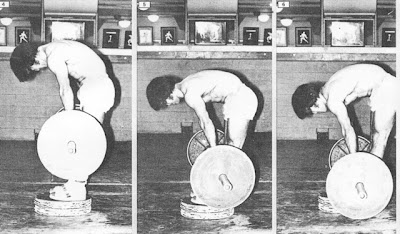 Photo No. 4: The barbell is lowered by transferring the curve of the upper back to the middle of the back. You should begin to feel the "stretching" effect moving down the back.

Photo No. 5: The back should be a smooth curve from the hips to the base of the neck. Efforts at this point should be made to "stretch" the middle of the back as you continue to bend down.

Photo No. 6: The transfer of the curve is now complete with the "stretch" being felt in the lower back and hamstrings. The arms should still be "dangling" and no effort to contract the back muscles should be made. You will also feel a stretching of the latissimus muscles.


Anyone who has trained hard on the Olympic lifts and overtaxed his lower back by performing numerous heavy pulling movements in one training session, or who has had several heavy training days in a row on the pulls, has experienced either a stiff back or overworked lumbar muscles to the point where they cannot relax or tighten them completely.

Your back can become "stiff as a board" with the lumbar muscles hard to the touch ("all knotted up"), or the muscles so fatigued that it is like a spring that has been overstretched.

In either case you have lost the explosive contractile quality of the muscles in the lower back.

I recall in the early '60's a lifter who made the U.S. team for the Pan American Games and trained three times a day, five to six days a week! When we were in Sao Paulo, Brazil for the Games he felt like he was losing his condition because he was training only two times a day. He was following one of the European systems and all this training left his muscles hard as rock; especially his lower back and shoulders. He was exceptionally strong but he could have lifted better had he spent more time working for elasticity of the muscles, and certainly, not so often in a day.

With the advent of the 2-lift competition many lifters have gone to the extreme in their training program by putting too many pulling movements in their routine, consequently overtraining their back muscles.

The Olympic-style lifters must have muscles that can contract strongly and violently and this quality cannot come about by overtaxing the muscles isometrically continuously.

When exercises such as the Good Morning, Hyperextensions, Cleans, Snatches, a variety of High Pulls and even the Olympic-Style Deadlift are concentrated on, or combined in one session, it is very easy to overtrain the lumbar muscles, causing them to become hard and tight, taking extra rest days to recuperate. All the aforementioned exercises are good exercises to develop pulling power but it is important that you are able to arrive at a happy combination of sets, reps, and poundages to work the muscles just enough to improve.

Imagine the muscles of your back as quality metal. If it is like cast iron then it is stiff and unbending and rather than bend under stress it would break. On the other hand, if the muscle is like a steel spring, well-tempered, there is dynamic life and "lift" to it and it has the quality to take punishment.

There are two ways to avoid "over-contracting" the lumbar muscles:

1.) Have a balanced training program which gives your back muscles enough exercise yet not so much as to overtrain them. Sufficient recuperation time should lapse between training sessions for the back.

2.) Include loosening-up exercises which "stretch" the lumbar muscles instead of contracting them.

The scheduling of a training program is more difficult since it is an individual thing; however, everyone can add a loosening exercise to retain the elastic quality to the lumbar muscles after having taxed them.

The exercise I am about to describe not only stretches the back muscles but serves also as a tonic to your regular training routine, for though this is not what you would call a "negative" movement, it certainly isn't a muscle contracting exercise as we know it. HEAVY WEIGHTS ARE AVOIDED FOR THIS EXERCISE; WHEN PERFORMED PROPERLY IT REQUIRES A VERY LIGHT BARBELL FOR MAXIMUM BENEFIT.

Again, as in the Olympic-Style Deadlift, I recommend that you perform this exercise with straps so you can concentrate your effort in performing the exercise correctly. THE WEIGHT ON THE BAR IS NOT IMPORTANT, in fact, it is better with extremely light weight and emphasis on the "stretch" of the back muscles.


Description of the Loosening Deadlift

Start Position: Stand perfectly erect with the barbell hanging at arms' length as in the finish of the normal deadlift.

Downward Movement: Start the downward movement by lowering your chin so it comes to rest on your sternum (chest" and at the same time slump your shoulders forward. The bowing of the back should begin in the upper back area.

Once the bow is started in the upper back the barbell is lowered so the bowing of the spine travels to the mid-back. And so on until you've lowered the barbell to the floor and the bow of the back is in the lower lumbar region. (Study accompanying series of photos critically.)

At all times efforts should be made to keep your legs straight so the "pull" can be felt in the buttocks and then in the hamstrings of your legs. Of course, the pull will also be felt in the upper back, then transfer into the middle back and then to the lower back.

A word of caution here when you are including this exercise in your training for the first time: Use an extremely light weight to begin and don't make any effort to stand on a block or a bench to get more stretch. Perform the movement SLOWLY AND SMOOTHLY and breathe out as you lower the barbell.

Upward Movement: This is just the reverse of the downward movement with the idea that the hump of bow of the back begins in the lower back and transfers up through the mid-back until you are again standing straight upright at the conclusion of the exercise. Inhale as you stand erect.

Repetitions: Since this exercise is not an exercise to develop strength but rather to promote recuperation of the back muscles and develop suppleness of the spine, you should perform between 8 to 12 repetitions.

Sets: Even a single set of 12 reps performed after you've finished your Olympic-Style Deadlift works wonders but you can perform an additional set or two without any harm if the weight you are using is light and it is done with the idea of bringing back elastic quality to the stiff and "pumped" muscles.

West Germany's great superheavyweight Rudolf Mang keeps his back muscles in shape during the off season with this exercise. In fact, many times this is the only exercise he performs when he is pressed for time. He gets a real good workout with 220 lbs. even though his record clean is near 500.

A person capable of cleaning 300 lbs. can use 135 lbs. for exercise purposes. As you get accustomed to the exercise, rather than go heavier in the poundage, you should attempt to stand on a box or bench and perform this exercise over a greater range to get a longer stretch.

Former weightlifting champion and phyique titlist and now a prominent chiropractor in Hawaii, William McDonough, recommends this exercise not only for those who practice the Olympic lifts but to everyone in general. It develops suppleness in the spine and hamstrings and promotes overall tone to the lumbar muscles when practiced as described in this article.


A big Thank You to this article's contributor!