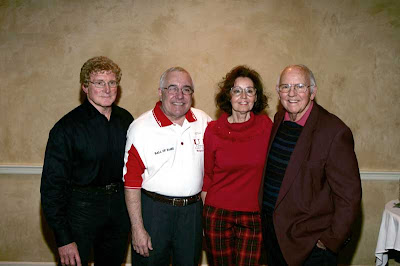 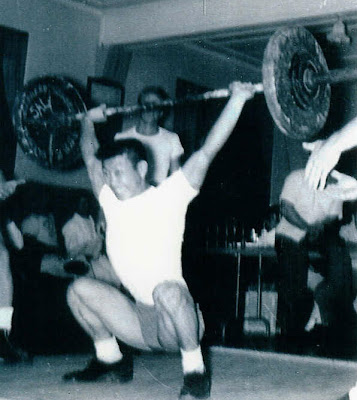 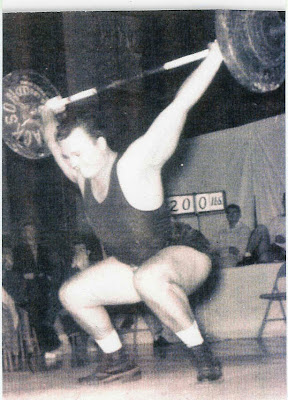 Until I met Mike Stansbury, a weightlifting coach, I was never interested in Olympic weightlifting. Mike had previously coached Walter Imahara, one of the top 132 lb. lifters in the country. When I first met Mike and Walter, I had just been discharged from the Navy and spent my last two-and-a-half years concentrating on nothing but bodybuilding, and I was ready for a change.

Mike and Walter had a hard time convincing me that I should lift, and since I had been a bodybuilder for about nine years at the time, it wasn't going to be easy for me to change my training around to include some weightlifting movements. And so at first I continued with my own training methods, doing a few presses now and then in order that Walter wouldn't pass me up. Walter and I traveled around to many meets in the South. We used to make at least two meets a month. Whenever we heard about a meet, we entered. The physique contests are always held last, which meant that I had to sit all day and watch the meet, and at times this can run into many hours. After two months of this, I decided to take some of Mike's advice and start lifting.

Along with Walter, the rest of the University of Southwestern Louisiana weightlifting team was coached by Mike. I started training with them in the afternoons -- on Monday, Wednesday, and Friday. I was still primarily interested in physique contests, so I continued with my bodybuilding on Tuesday, Thursday, and Saturday, which meant that I was training about four or five hours a day. I had not reduced my bodybuilding any; the weightlifting was added. Previously I had been using a split system of bodybuilding, which I now combined and did all in one day.

Immediately, I started to improve, both in strength and development. I was getting stronger by the day, and continued to improve for about a month, when I lost interest in everything, especially bodybuilding and weightlifting.

I talked to Mike, and he suggested that I continue with my bodybuilding, just adding a few weightlifting exercises, which I was doing anyway. He said to practice a different lift each training day, instead of trying to go all out on both bodybuilding and weightlifting at the same time. After a short layoff, I started training again, using my split bodybuilding routine including a few more heavy exercises, and I continued doing a different lift each workout. I continued to improve, although not as fast as I had been; but I was still improving. I continued this type of training until the Junior Mr. America contest which was held in May. In this contest, I placed second in physique scoring and third in the 181-lb. weightlifting class. After the Jr. Mr. America, I dropped the three lifts from my workout and increased my bodybuilding for the final three weeks of training for the Mr. America contest. I did, however, still continue to use the high pull in my workouts.

Although my weightlifting career has been short, it has proven to be very helpful to me. During this short period of nine months, I noted many changes in my development. In comparing my development at the time I won the Mr. America to the year before when I placed seventh, I noticed many changes -- nothing big, and remember, it's the little things that count -- but many small changes. My muscles were much thicker than last year, especially around the upper back and shoulder area, and my lower back had improved 100%. All in all, my physique had taken on a more rugged appearance with a look of greater power. Many people who had seen me the year before could not believe the improvements I had made during the year, especially since I had been training consistently for over nine years.

As I said before, lifting helps in muscle development, especially the upper and lower back. Heavy cleans, high pulls, and dead-hang snatches, I have found, are some of the best exercises for trapezius development. Even though I am by no means exceptionally strong, these exercises are in part responsible for the improvements I have made recently. I still include them in my workouts, even when I do not include lifting.

A few warnings before I go into my workout combining weightlifting and bodybuilding. Do not try to do everything in one workout. Split your workout, so as to include one of the three Olympic lifts on each training day. Do not try to work on your limit each day. You will find that you will become stronger and also a better lifter if you practice your form during some workouts. Do not place your quick lifting at the end of your routine as it requires all of your coordination, speed and concentration. Do it first, while your energy is high. The following is an example of a thrice per week weightlifting and bodybuilding workout:

Exercise #1 should be changed each training day, rotating the Press, Snatch, and Clean & Jerk.

Many of the exercises in this routine can be changed around to suit your own needs, and others can be added if you feel this example is not enough. I outlined this routine only to give you a general idea of what should be done.