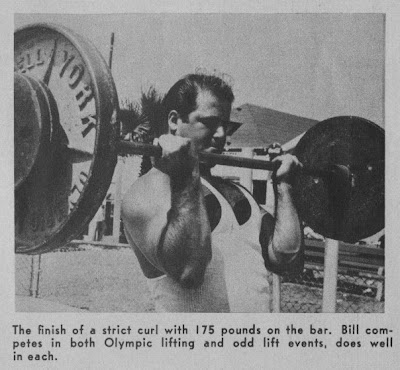 Bill West and The High Dead Lift
by Armand Tanny

The demands of power lifting are so great that energy must be portioned out from day to day with jealous care. Training for competition on the bench press, squat and dead lift, the three official power lifts, slaps tax on energy that all too often seems indifferent to profit in strength. To overcome this bad commerce the West Side Barbell Club members have set up a smart trade agreement whereby all three power lifts share equally in the amount of energy allotted to any individual lifter. It used to be one lift hogged all the profit, like when everyone was specializing on the bench press. Such is not, and cannot be the case now. A three-lift total decides the champion. It is unprofitable to specialize because any one of the three lifts has a high poundage potential.

As a result, the one day out of the week allowed by Bill West and his group for training on the dead lift is all that is necessary. Although two squat sessions comprise part of a week's program, one of these workouts is entirely bench or box squat, in actually a compromise lift that favors both the full squat and the dead lift. Thus with leg power fairly well established, they have worked out a compromise system of dead lifting. A partial movement called the High Dead Lift has been developed and has become a dominant part of dead lift training. The official dead lift per se is purely a power lift. It is unique in that it is almost totally lacking in technique, something that cannot be said for the bench press, squat, the Olympic lifts, or for that matter any of the known lifts. But often in a regular dead lift the power gives out after the weight leaves the floor, and the bar stops at a point below the knees. Where did the back power go?

The High Dead Lift was developed to overcome this power failure. Where the power rack was used for lockout bench presses and bench squats, in the High Dead Lift blocks are placed under the plates of the bar so that it strikes the leg about one to one-and-one-half inches below the knees. The rest is simple. Using the regular contest grip, hands reversed, you dead lift the weight to the final erect position. Make one attempt only on each weight. The entire workout amounts to four or five single attempts with high poundages. Nothing else. This workout is performed once a month in place of the regular weekly dead lift workout. Since full squats are done on Saturday and bench squats on Tuesday, Wednesday was chosen for the dead lift. This sequence has been carefully planned according to the available energy in a seven day program. The squat and dead lift must share with the bench press, remember.

Using arbitrary amount of weight in a proportionate order of progress, a High Dead Lift schedule goes like this:
550x1
585x1
625x1
660x1
690x1 (with straps)
A final maximum attempt may be taken with straps. Straps are an essential part of dead lift training. Too often in the middle of a heavy attempt the grip gives out while the back is still pulling. Straps eliminate the grip problem and permit the back to exert a sustained effort. Bill West describes the effect. "When you start the pull, nothing seems to happen for several long moments. You keep turning on more and more power, and then finally the bar begins to move off the blocks. Without the grip to think about you can pull hard and long until you are fully erect. In one long big effort like this you have the equivalent, or more, of a whole set of heavy reps. It builds back muscle."

The strap itself is a length of one to one-and-a-half inch belt webbing sewn or riveted into a loop in one one end with a foot or so of free length. With the loop around the wrist you wrap the free end around the bar. You grip the bar over the webbing. It is simple with practice, and you can manage to cinch both hands securely. By the time a man is ready for high dead lifts with straps, the chances are he will have seen others use them, and he can copy.

Some amazing feats of dead lifting strength have been performed with straps. When 280-pound heavyweight Dave Ashman was at his best a few years ago, at the same time he was crowding a 500-lb. squat clean, he did a high dead lift off milk crates with 880, using wrist straps. Ashman did heavy deadlifts barefooted for maximum stability.

Doug Jamey, an Ashman contemporary weighing 165, did what was considered the grittiest display of back power ever made. Using wrist straps, you might say he was literally welded to the bar, he did three repetitions with 700. He hunched each rep every inch of the way. It looked like pop art in motion, the way his skeleton stretched and bent, a living impossibility. As an encore, he stood in front of the bar and did three reps from behind. At a bodyweight of 159 he did a continental clean of 400, inching it up his front in the same fantastic, drawn-out display of power. Theatrics of this sort naturally invited a bit of upstaging. Dan Vafiadis, now starring in European movies, challenged Doug to a finger twisting contest. It broke Doug's finger. Shortly after, Doug decided to walk to Alaska. With full pack and barefooted he said goodbye and started walking north up the beach from Santa Monica. No one has heard tell since, but no one doubts he made it.

Bill West himself does not train on the dead lift in the official style, i.e., with the normal width of the grip. He prefers to do the Snatch Grip Dead Lift, simply the regular dead lift off the floor but with a wide grip. He believes in variation. By building the muscles from angles, the official movements are improved. We understand that the high dead lift improves the final phase of the pull. With the snatch grip, on the other hand, the initial phase is improved. The back is in a deeper bent-over position, from a full powered standpoint slightly at a disadvantage, but building strength at this point completes the whole back picture. Strength exists through the entire range of back lifting. Bill uses this style for most of his dead lift training. Except for the High Dead Lift day once a month, he works the Snatch Grip Dead Lift every Wednesday:

Using a regular overhand snatch-width grip --
Bar on the floor, increasing weight with each set -
4 sets of 3 reps
2x3, with straps
3 singles, close grip with about 87% of maximum regular dead lift

Notice that the last three singles are done with a close grip. The elbows are inside the knees. Actually the legs are spread wider than normal. Again, this variation strengthens the leg pull from the wide position. It becomes obvious that a theory emerges that prohibits the existence of any weak spots. By closing the gaps, there is no chance for power to leak out. It is like military strategy: For every man at the front, you have 10 men supporting him at the rear.

The schedule above is the one Bill West works on Wednesdays. Although deceptively low in numbers, it still constitutes a tremendously hard workout. Apart from the initial warmup set, the schedule consists of approximately 16 very hard wide grip, and also narrow grip, dead lifts. Enormous energy goes into it. A similar schedule for, say, the military press would not take near the energy. Large muscle groups and high poundages are used in the dead lift.

Perhaps the greatest deadlift on record is Hermann Goerner's 794 and 3/4, performed in 1920. Bob Peoples at a bodyweight of 189 dead lifted 725 and 1/2 in 1949. Heavyweight Terry Todd presently does 740. Getting back to mighty Dave Ashman again, about six years ago when he was at his prime on the Olympic lifts, Tommy Kono forced him into a dead lifting bet. Ashman made a perfect 730. Then he put on wrist straps and made 790.

Any accessories that may help in training on the High Dead Lift can be used. A lifting belt over a towel offers abdominal support. Sneakers are the best footwear. They permit full expansion of the foot under heavy loads.

A suggested program for a the beginning dead lifter:
5 sets of 5 reps -- 30 to 60 days, perhaps twice a week.
The High Dead Lift is advanced work, and will come later. Keep it in mind, and work hard. Power Lifting is growing.