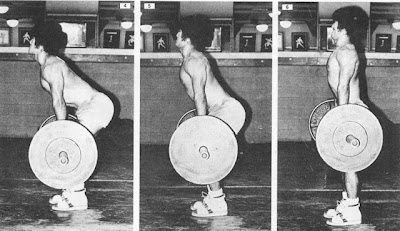 Photo No. 1: Gary has already tensed his back flat (arched) and bent his legs to reach down to grip the bar. The arching of the lower back can become more pronounced if an effort is made to inflate your chest so your lower rib cage fans outward. It is easier to assume this tensed lower back-raised, lower rib cage position before gripping the bar then to bend over, grip the bar, and then to get the proper tension and raised chest position

Photo No. 2: Back is flat, arms straight and the chest well in front of the bar. The lower back is tensed. To help fix the back even the latissimus muscles are flexed.

Photo No. 3: Start the movement with the leg drive. Note that the back angle has not altered although the weight has left the floor. 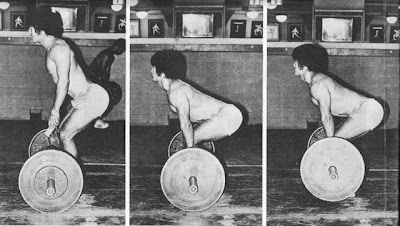 Photo No, 4: The leg drive has lifted the bar higher but very little change has taken place in the back angle from the previous position. (The bar is slightly above the knee level position here.)

Photo No. 5: The important point in this photo is that Gary is attempting to keep the shoulders in front of the bar which automatically causes him to bring his hips closer to the bar. In other words the shoulders remain in a fixed vertical path while the hips move forward to get in line with the shoulders and not the shoulders coming back to where the hips are.

Photo No. 6: This is just before Gary brings his shoulders and hips in the same line. Note that his shoulders are still in front of the hips and he has maintained his flat back thoughout the movement. The completion is when the shoulder point is directly over the hips and the bar is across the front of the thighs. DO NOT LEAN BACKWARD AT THE CONCLUSION OF THE UPWARD MOVEMENT.


The Olympic-Style Deadlift
by Tommy Kono (1974)


"As a twig is bent, so grows the tree," is an old and familiar saying, and the idea behind it can well be applied to the Clean. Time and again I have seen the most experienced lifters lose attempts well within their capability simply because they started the pull incorrectly. ONCE THE LIFT IS WRONGLY INITIATED IT IS EXTREMELY DIFFICULT TO CORRECT THE ERROR AS IT PROGRESSES.

Correct technique is one of two important requisites to reach high levels in our sport. The other, or course, is power. I have always stressed that technique of the lift comes first. Once the proper form is acquired then the bulk of your program can be focused on the development of power for the two Olympic lifts. However, should you develop power first and then try to correct your lifting technique, more likely than not, when the weights become heavy on the lifts you tend to rely more on power than technique to make the lift. The result is unharnessed power -- which spells disaster.

When Stanley "The Flash" Stanczyk was at the peak of his illustrious championship form (six times world and Olympic champion) he appeared on Ed Yarick's annual "Big Show" in Oakland, California. I was an enthusiastic, wide-eyed teenager in the lightweight class destined to make my first Clean & Jerk of 300 lbs. that night while lifting along with him.

Stanczyk's best official lightheavyweight Jerk record was 363 lbs. but he was capable of cleaning 370 or more in the split style. His second pull begged description, so strong was the "whip" from the knee level. I was full of questions that evening for I wanted to know how he developed such a strong pull. In our conversation I learned that his best Squat was 420 lbs. which was not much more than my best of 410 but the information that got me thinking was his ability to Deadlift 600 lbs. which he made as a middleweight to win a wager. I learned also that he never really practiced the Deadlift movement in his regular training routine but he was naturally strong in his lumbar region from all his lifting training.

Like a mathematician, I related the Deadlift poundage to the Cleaning ability of Stanczyk. I had never incorporated the Deadlift in my training program in the past but now armed with this "secret" I intended to specialize on the movement. After six weeks of concentration on my new program I was able to perform 10 repetition Deadlifts with 400 lbs. while standing on a couple of two-inch boards. Imagine my surprise and disappointment when I failed to clean any better after all this training. My pull was strong from the floor but by the time the bar arrived at my knee level I had no pulling power to follow through on the Clean! Back to the drawing board with more research to follow.

In this "era' was a fellow who had the world record Deadlift with 725 lbs., making this lift at approximately 179 lbs. bodyweight. He had entered some Olympic lifting meets and his best Clean & Jerk was 310 lbs. No Deadlift-Clean relation here, for sure!

After much thought, speaking to others who were well versed in the Iron Game about technique and training, I realized that the normal Deadlift as it is performed was not the answer to greater pulling power for the Olympic lifts. In fact, the way the powerlifters perform their Deadlifts actually teaches the Olympic lifter to pull INCORRECTLY.

Bowing of the upper or lower back will make you handle heavier weights in picking the barbell off the floor but is severely impedes the "second pull" which begins at the knee level because you sacrifice your leverage of a stiff back necessary for the explosive straightening of the body.

In this two part article I want to cover two types of Deadlifts, and each of them is aimed primarily for Olympic-style lifters. For want of a better name I will term the first one "Olympic Style Deadlift". The second one is more or less required from the outcome of the first one and I will call it "Loosening Deadlift".

Before explaining the details of this Olympic-Style Deadlift exercise, a word of advice if you are an Olympic lifter and have never really trained on the Deadlift. It is best that you use straps even with the lightest of weight in performing this exercise. Only when you have acquired the ability to concentrate correctly on the proper technique would I recommend you use a regular grip with the light and medium weights and use the "hook grip" with the real heavy ones in training. Distraction from your concentration on the correct technique can come about very easily when you experience sore thumbs from hooking or your grip is giving from using the normal grip.


Description of the Olympic-Style Deadlift

Start Position: Approach the bar as you would for the regular Clean. Get into the proper pulling position: back flat (or even arched so your lumbar muscles are tightened), arms straight, and shoulders well in front of the bar.

Upward Movement: While maintaining a flat back (or arched which is better) and the angle of your back in relation to the floor in a fixed position, "PUSH" the floor downward with your feet. If this idea of a downward push of your feet is hard to imagine then perform the Deadlift in the usual manner but with emphasis placed on two things:

1.) Keep your back flat or arched at all times.
2.) Keep your shoulders well in front of the bar throughout the lift.

Downward Movement: In this exercise it is important that once the upright position of the body is attained the lowering of the bar is also performed in the exact reverse of the upward movement; i.e., from the upright position incline the upper body from the hips slightly forward so the shoulders are in front of the bar, and while maintaining a flat (or arched) back, lower the weight by bending your legs.

Never perform the movement hurriedly because the concentration on the correct technique would be lost. The barbell should never rest on the floor between repetitions.

Study the accompanying photos which were especially posed by Hawaii State featherweight champion Gary Kawamura who has Snatched 220 and Jerked 280 to total 500. These photos were not made with a sequence shooting camera but are a series of posed individual still photos.

Repetitions: The amount of repetitions in the Olympic-Style Deadlift should be between 3 to 5 reps. The amount or weight should be governed by what you can handle correctly for the required amount of repetitions. If you perform this movement correctly the weight you use for 3 reps shouldn't be exceeding 10-20 lbs. over your top cleaning ability. If you can handle more weight in the manner described than what is stated, then either your technique for the Clean is poor, or you are not performing the Olympic-Style Deadlift with the proper back position . . . or you have a new personal record on the Clean waiting to be made on your next "heavy day".

Sets: The total amount of sets to perform on this exercise depends a great deal on what you have already performed in your training. 3 to 5 sets is the usual number of sets performed with medium to heavy weights if it is included along with medium weight Cleans or High Pulls. More sets can be performed but only if you are concentrating on this Olympic-Style Deadlift at the conclusion of Cleans and High Pulls on that particular training day.

This exercise should be performed toward the end of your training period because it does tax and tire your lower back and legs.

The Olympic-Style Deadlift is a very simple movement and the range the bar travels is very short; however, this is a critical area and it governs the successes and failures in record attempts. This exercise has a twofold purpose:

When this exercise is performed correctly IT IS IMPOSSIBLE TO "EXPLODE" THE WEIGHT OFF THE FLOOR!"

The Snatch-Grip Olympic-Style Deadlift is also an effective exercise to perform; however, on this lift you will be able to handle more than 20 lbs. above your record Snatch for 3 reps.