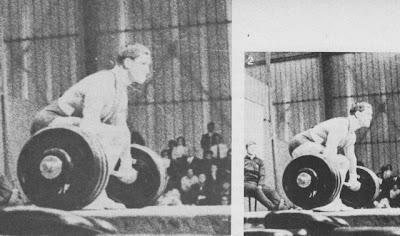 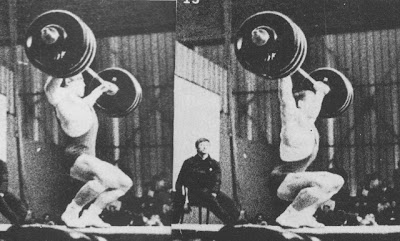 The ABC’s of Weightlifting, Part 15

This article is a continuation of the previous one where we stress two factors essential to achieving maximum pulling power for the Snatch. In reviewing these points they are:

1.) Start the pull from the platform in a deliberate and controlled manner using only the large and strong muscle groups of the body (hips, buttocks and thigh muscles) while maintaining a fixed back position.

2.) Keep the bar as close as possible to the body once the barbell is in motion.

With this article is a series of photos taken of the Soviet Union’s Gennadi Ivanchenko establishing a lightheavyweight world record in the Snatch with 337¼ pounds in on February 14, 1971. Though this record has since been exceeded, nonetheless these photos still serve a good analytical use and help to emphasize the two points stressed in the previous ABC series.

Before we analyze Ivanchenko’s Snatch technique photo by photo let’s look for the two points stressed above.

Photos 2 to 5 show no change in the angle of the back in relation to the platform. The back, shoulders and head stay at a fixed angle. Only the large muscle groups of the buttocks, hips and thighs are in action. The arms remain straight and taut throughout this phase of the pull.

Photos 6 to 9 show the Russian champion keeping THE BAR VERY CLOSE TO THE BODY, and THE BODY CLOSE TO THE BAR in photos 10 to 12. In either case, the bar was not swung and the bar traveled close in relation to the body. “The bar being close to the body” and “the body being close to the bar” will be explained fully in the later part of this article to clarify the wording.

Ivanchenko has not commenced his pull yet but is getting set to start the pull. Some lifters, prior to the start of the pull, keep their hips extremely low as in the case of Japan’s Yoshinobu Miyake or raise their hips with legs almost straight as Finland’s former world record holder Jaako Kailajarvi. Some lifters crane their neck forward and advance their shoulders well in front of the bar prior to the pull. From these varied positions the body is brought into the correct position to start the pull in which case the arms are always perpendicular to the floor and taut while the back, shoulders and head become fixed.

The initial pull has begun and notice how the body and head are fixed in one rigid line and the arms remain straight. Note the angle of the back in relation to the platform.

No change is visible between this photo and the previous one except the legs have straightened just a little more. The bar is still traveling relatively slowly since a very slight height change of the foreground end of the barbell plate shows.

The back angle in relation to the platform hasn’t changed one iota although the legs have straightened more. Though the bar seems to have accelerated it is still traveling relatively slowly.

I’d like to repeat here once again: the head, shoulders and back have remained in the same fixed position throughout these 3 (2,3 and 4) photos.

The bar has just above reached knee height and even at this stage there is little difference in the back angle in relation to the platform. Note here that the legs are almost straight, a position that is necessary because the knees must get out of the path of the bar in its upward travel. The same result would develop if we assume the correct starting position and then attempt to push the platform downward.

At this stage the bar has moved toward the center line of the body (see “S” Pull article) and the combined balance of the body and barbell has shifted from the balls of the feet toward the middle (or even slightly toward the rear) or the feet. The buttocks appear to project to the rear but this is compensated by the shoulders and head projecting out toward the front. (Review articles 2 and 3 in the ABC series.)

Now comes what I term the Second Pull, the area where you have the greatest pulling power because of the leverage of the muscles with regard to the bones.

The bar is kept close to the legs which in this case means the bar will begin to either brush along the thighs or actually scrape the thighs. In this photo Ivanchenko is trying to get the combined mass of his body and the barbell back on the balls of his feet.

The Russian lightheavy has gotten his body in the strongest position, leverage-wise, to employ as many muscle groups as possible so as to get an explosive pull. His thighs, lower back, shoulders and calves are in the most advantageous position for maximum extending force. At this point the combined mass of the bodyweight and barbell has moved to the balls of the feet.

Here is the maximum extension phase, a stage most lifters fail to achieve because of faulty technique leading to this stage. Note that Ivanchenko is trying to lengthen his body and lifting his elbows to keep the upward pressure on the bar. The arms are beginning to break now for enough momentum has been imparted to the bar so that it requires very little pulling strength to keep it moving.

In this 2nd pull phase you must have created enough momentum on the bar so the bar will ride even higher as in photos 10, 11 and 12 EVEN WHEN THERE IS NO CONTACT OF THE FEET WITH THE PLATFORM.

When the feet first lose contact with the floor (because our pulling stance and the placement of our feet for the squat are quite different) WE CANNOT EXERT MORE PULL ON THE BAR IN RELATION TO THE PLATFORM but WE CAN USE THE BAR TO PULL OUR BODY DOWNWARD and help accelerate the descent of our body. THIS is where our arm strength comes into play but not to pull the bar higher in relation to the platform. So, Ivanchenko is in reality using his arms to pull 181 pounds (his bodyweight) DOWNWARD, rather than pulling 337¼ pounds (the weight of the bar) upwards with the strength of his arms.

Let me restate it, lest I am misinterpreted. Arm strength is used somewhat in all pulling movements in relation to the platform but the pulling power generated on the bar by the use of the arms is nowhere near the strength that can be exerted or created by the stronger muscle groups such as the legs, back, shoulders and calves in comparison.

So long as we are exerting pressure on the platform with our feet in pulling we have control of the bar; therefore, we can keep the BAR CLOSE TO THE BODY, but the moment our feet lose contact with the platform and the barbell weighs heavier than our own bodyweight we must try to keep the BODY CLOSE TO THE BAR.

Ivanchenko is still exerting pulling pressure on the bar, not to pull the bar higher but to help him descend faster so he can race under the bar before it begins to gain momentum in the downward plunge.

The lifter has gotten directly under the bar and is fixing his arms and back to prepare for the full load of 337¼ lbs. coming down.

The arms are not only locked but most outstanding snatchers keep the upward pressure on the bar by actually pushing upward with the locked arms. The back is fixed so that it does not bow and the impact of the weight is cushioned by the flexed legs. The inclination of the back actually helps fix the weight better in the finished position of the lift.

When a correct Snatch is performed a lifter can bounce right out of the squat without losing balance or unlocking the elbows. The strain of the load is usually felt in the WRISTS when a perfect snatch is made!

In these two photos (14 & 15) the right leg of Ivanchenko is not flexing as even as his left but it did not affect his balance.

In photos 9,10,11 & 12 note how close the bar is in relation to the body (or vice versa, how close the body is to the bar). Most lifters start swinging the bar (and the body, consequently to counteract the swing of the bar) from the position of photo 6 and some from photo 7.

With the bar traveling close to the body it has very little forward or backward movement and all the force is directed in one direction – upward. With this type of pull you have very little chance of losing a Snatch if you can get the right height for the lift.

Study the whole series again and try to picture the continuity of the lift. I suggest you skim quickly through photos 1 to 15 while fixing your concentration on the following points:

1.) Study the path of the barbell.

2.) Note how the weights of the body and barbell shift from the balls of the feet to the middle of the feet and then back to the front again.

3.) Note how the back remains flat and fixed throughout the movement.

4.) Note how closely the bar travels along the lines of the body.

5.) Note how the lift leads up to the extension of the lifter.