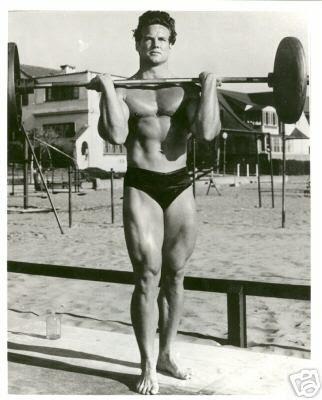 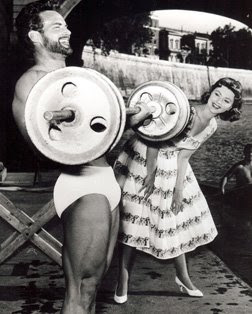 
When bodybuilding began growing in this country well over a half century ago, every system of training designed for developing muscle included the regular form of shrugging exercise. The reason is logical enough for anyone who is familiar with the physical benefits that may be obtained by its proper use. And any instructor who has used this exercise himself and knows the true value of it will invariably recommend it to others, especially to the novice. Yet the enthusiasm for this particular exercise over the years has steadily declined until it has drifted into oblivion. In fact, very few of the present training systems, outside of York, include it.

I'm inclined to think that very few contemporary bodybuilders understand the real significance of the exercise upon the body, and the effect it has upon the body's symmetry. For one thing the shrug activates the largest muscle in the upper back, the trapezius. And, perhaps even more significant is the fact that few people realize that when this muscle is fully developed it adds greater mass to the upper back, and even greater all-over depth to the body. The trapezius has its greatest visual prominence just on top of the shoulders where it flanges out from each side of the neck at the base of the head to the acromium process. In well-developed men this muscle is conspicuous without any attempt do display it. But it can be made to stand out boldly by a simple control by those who have the ability . . . and many have.

Many of the well-built men of today are found lacking in full development of this muscle, and in some cases where it does exist, it seldom is in the right proportion to the latissimus dorsi and the pectoral muscles. Much of this can be attributed to a lack of lifting movements which the average bodybuilder avoids because he feels that actual lifting does not develop the pectorals and his other favorite muscles. Yet lifting, any kind of lifting movements, not only activates the large trapezius muscle, which it does very vigorously, but all of the muscles of the back, arms, shoulders and legs. Those who do not include some form of lifting in training always develop better physiques.

It's noteworthy to point out that when full development of the trapezius is lacking in the back it imparts a peculiar shape to the shoulders. Of course any qualified coach or experienced lifter will notice this "difference" and knows that something is missing. I might add, and rather reluctantly, that this particular condition is often favored by beginners. The reason is that when the development of the trapezius is missing it gives the shoulders a straighter line from the neck out to the shoulders, and this creates an illusion of broader shoulders. When the trapezius is fully developed, however, the shoulders do not have that straight line, but have more of a sloping effect which is formed by the trapezius muscle, and this may actually cut down the appearance of width. but when two such backs are placed side by side and studied, there is no comparison. The back with the well-developed trapezius will look stronger and more rugged, while the other back will appear weak and infantile. Such a comparison should prove beyond any doubt the importance of well-developed trapezius in relation to appearance and strength.

I feel sure that all of you must have noticed the varying degree of trapezius development possessed by all lifters, ranging from good to very outstanding. On the other hand, comparatively few bodybuilders have what could be called exceptional development in this area. Specifically this is the direct result of not doing enough lifting exercises or other exercises that work this muscle. More shrugging appears to be too simple a solution for most bodybuilders, since it does not provide them with that pumped up feeling which they experience in other exercises. So they neglect it on the grounds that it is useless, consequently they never really develop the trapezius to the degree they have developed their latissimus, pectorals or arms. The end result is that when all muscles are not developed proportionately the symmetry of the body is ruined and only a handful of experienced people are able to explain the reason why the physique is weak looking.

As I have stated, lifters on the whole have better and stronger looking traps than the average bodybuilders. And as previously pointed out, all lifting tends to activate this muscle strongly. But here is something that very few bodybuilders may realize -- even when a bodybuilder is more muscular than a lifter, but because his back lacks complete trapezius development, he (the bodybuilder) will appear less muscular, at least from the back view, than the lifter, even if the lifter had less overall muscularity and less latissimus development. The lifter's outstanding trapezius development would make him look bigger and more muscular.

It's been proven several times that when the trapezius is fully developed it creates deep muscular ridges on the back that instantly emphasize power. This proves that well-developed traps do accentuate muscularity of the back.

Exercises such as pulling, cleaning, and snatching weights to the shoulders or overhead work this muscle vigorously, as do heavy deadlifts, high pulls, straddle lifts, hand and thigh lifting and other heavy lifting that exerts a downward or backward pull on the shoulders. Other more direct movements include such exercises as the standing lateral raise, bentover lateral raise, most presses, wrestler's bridge, and of course, shrugging in its various forms. So actually this powerful muscle is called upon in many ways, but the question remains, just how vigorously do you exercise it? Being the largest muscle in the back it can withstand almost any degree of work that you impose upon it, and in fact will demand vigorous action if full development is to materialize.

Developing the large trapezius muscle should not be the sole goal of all who include shrugging exercises in their training. The main purpose for including it is the favorable reaction it has upon the whole body. Most fellows are not fully aware or the possibility of this exercise and assume that shrugging exercises are employed chiefly for developing the trapezius. This assumption is wrong. One example, for instance, is that shrugging helps to cover up those deep hollows along the collar bones which many lifters, and especially bodybuilders, are troubled by. A large part of this condition is due to the lack of exercise that develops the trapezius, the upper section of the pectorals, and part of the deltoids. Yet one of the best exercises for this condition is shrugging. It not only develops the trapezius but also involves the upper clavicular section of the pectorals, the area high on the chest at the base of the neck. In most people this region is thin and shallow, with very little more than the skin covering it. Proper shrugging, however, will develop and thicken this region and put more curve on the chest. It is therefore an important movement and one that should find a place in your training schedule.

Shrugging exercises can be done in a variety of ways as you may already realize. And variety should be used so this muscle is fully worked from all possible angles. Bear in mind that it's a huge muscle and can tolerate an amazing amount of training without suffering any reverse effects.

In terms of repetitions, this muscle responds well to high counts and relatively heavy resistance. Much depends, of course, on the number of exercises you do, and whether they are repeated in sets. If sets are used then less repetitions are advisable if maximum development is to be expected.

Excellent results can materialize by including some of the following exercises in your training program:

This would lead to a provocative question of whether or not this muscle can be overdeveloped. And while no one seems interested when other muscles become overdeveloped, they are when this muscle is. Over-development of the trapezius muscle is not to be desired and does not add to the body's symmetry. Most muscles are not easy to overdevelop, and as a matter of fact it takes considerable concentration on the part of the enthusiast to reach this condition, On the other hand, development of any muscle can be arrested at any time you feel you have enough development simply by reducing the amount of work assigned to it. To keep it in shape just do a few movements once or twice a week.

The benefits that actually accrue from shrugging exercises far surpasses the development of the trapezius that you might attain. To sum it up -- shrugs help to facilitate more complete breathing by helping to raise the ribs; they strengthen the diaphragm; they help to contract and retract the abdomen; they assist in shaping the outer edge of the pectorals; and they thicken the clavicular section of the chest. It should be obvious that shrugging exercises should not be neglected. No wonder then that all the old training systems used to include it. The instructors knew the value of this exercise and the effect it had upon the overall development, and recommended it. If you have been neglecting shrugging exercises it's about time that you discovered what they can do. You owe it to yourself.