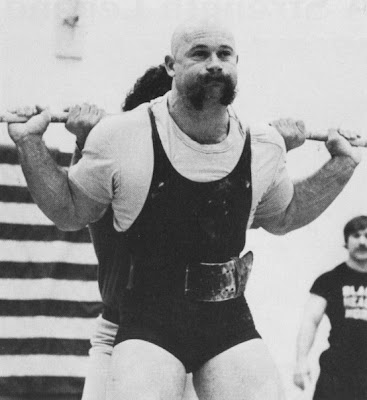 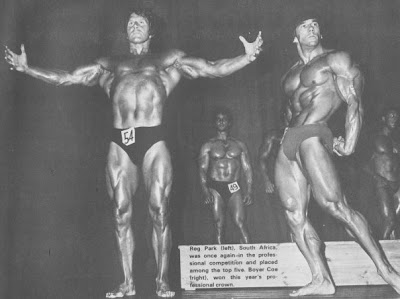 A Strength Legend
by Paul Kelso

The Iron Game has had its share of odd happenings and unique characters. A fellow could probably get a Ph.D. in Folklore if he collected some of the legends and tales that can be heard when the oldtimers get together to talk about unofficial lifts, spur of the moment contests and hometown strongmen.

When I took a degree years ago in American Culture studies, a guy I knew got a Master’s for analyzing the slogans found on satin pillows sold at 19th Century fairs and carnivals. One of the pillows carried a silk-screened depiction of Eugen Sandow lifting an elephant off the ground with a hip-harness. I have long thought that a study of strongman artifacts might tell us something about the American fascination with great feats of strength in relation to our national character. Are such accomplishments becoming less important in out high-tech world? Is there still a place for these lone and solitary giants in our society?

When I lived in that part of the world where the Cedar River makes its bend southward and heads for its junction with the Mississippi, east of Cedar Rapids and west of Davenport, I heard stories from the greybeards about one Jim Jicha. He was a farmer of Czech descent whose family had settled in Iowa at roughly the same time that Abe Lincoln and the Illinois militia were chasing Black Hawk. Jicha died thirty years or so ago, but here were and are many who swore he was the ‘stoutest man I ever seen’, as in the words of one old railroader.

All the great strongmen clichés were attached to his name: he could pick up an anvil by the horn with one hand and hold it straight out in front of him, bend horseshoes with his hands, swing on a spike with a nine-pound maul in each hand and drop an ox with his fist. These are 19th Century workingman’s stories; they’ve been around. One way they stay around is when people find themselves faced with a similar situation, and someone challenges another to see if he can recreate the myth. But, sometimes one an or woman in a generation will come along and do something that others cannot hope to duplicate or even understand.

The day Jim’s reputation was made was reconstructed from the barber shop, memories and tavern ramblings of a half-a-dozen men I talked to over a five year period. They all swore they were there. As the poet said, ‘I know not what the truth may be, I say the tale was told to me.’

One day Jim hitched up the Belgian horses and drove his wagon into town. He had a truck, but the old ways suited him on occasion. Besides, money for gasoline was rare during the Depression. He tied up at the railroad siding to pick up a load of begged seed and barrels of flour and molasses. While others watched, Jim off-loaded his goods from the box car himself to save the fee. 100 lb. seed bags, maybe thirty of them, and then the barrels. Now these were barrels in the old sense, not beer or pony or nail kegs as we know them today, but barrels!

He took them off the box car by hand, and without using rolling planks, set them into the wagon. One fell out of the wagon to the ground. It did not break. Such were barrels in those day. Jicha seized it by the rims and hoisted it back on the wagon. Set it up on end.

This is something for all to ponder. Whether ‘Mr. Wonderful’ of a six-time, 275 pound world champion powerlifter can pinch grip a fifty gallon barrel of molasses high enough to set it in a farm wagon, on end, is worth considering. Jim then got up on the seat and clucked off down the Sutliff road toward home. The Belgians, strong as they were, had a tough time pulling through the muck of the spring-thawed road.

It was four miles out of town, some say six, when the right rear wheel hub shattered. Several local farmers came out to help. One went back to his place for another wheel. The story varies at this point. Some say Jim deadlifted the corner of the wagon high enough for the men to get the new wheel on; others claim he got under the wagon bed and back-lifted it out of the mud so the helpers could brace the bed with logs and boards. How much does a wagon bed, thirty 100 lb. seed sacks and six barrels weigh?

Jim set out again, urging the big maroon horses through the mud, but after a hundred yards the bed of the wagon splintered down the middle and dumped the load into the ditch. Jim asked the other men to watch the load and strode through the fields to his barn where he had a new bed stored, unused.

A wagon bed of that type weighed about 400 lbs., according to those storytellers and farmers old enough to know. Jicha shouldered the bed, or maybe hitched it up on his back, and lugged it the two miles, some say four, to where the men and the broken wagon waited. After the new bed was in place, the men helped Jim haul the sacks and barrels out of the ditch and reload. Jim had to heave ALL SIX BARRELS from the road into the wagon. It was well after dark when he got home. He unloaded the wagon by himself. All in all, he put in a fair day’s work.

I’ve seen an old photo of the man. Looked about six feet tall and weighed 240 lbs., if my eye is any good. There are arguments in the feed stores and barber shops and taverns about when Jim did one thing or another, but woe be to the outsider who voices doubts out loud about any of the Jicha stories. The few oldtimers who knew him, and they are very few now, are as proud of having known him as they are of their Czech heritage.

It Jicha had lived in an earlier time, or been involved in an incident dramatic enough to have made the newspapers, he might have become a folk hero like a Paul Bunyan or Mike Fink. There is no evidence I know of that he ever touched a barbell. But in that Valhalla for strongmen where dwell the Sandows, Jowetts and Cyrs, I’d like to think Jim Jicha would be welcome.

They would recognize each other.