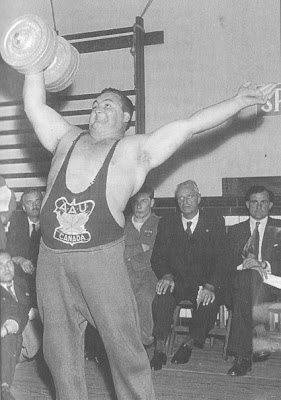 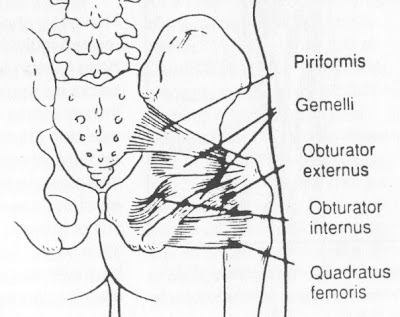 Figure 1
Deep Rotators of the Hip 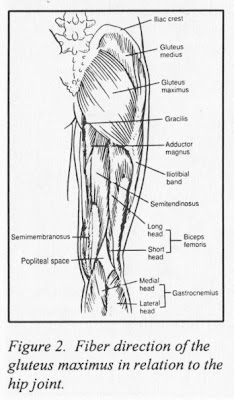 
If you are an Olympic lifter, and the weights feel heavy coming off the floor or you have difficulty ascending from your squat cleans, considering some of a powerlifter’s routine warrants your attention. In short, there is probably something in your training that power movements may be able to correct.

Regarding the first pull off the floor: The first pull of a snatch or clean is nothing more than a deadlift. A weak first pull, even if you succeed, will many times put you in a position to ineffectively negotiate a smooth second pull. If the weight is out of the groove when you shift gears, failure can occur at the racked position in the clean or overhead in the snatch.

Nowadays a preferred method of training deadlifts by powerlifters is to accelerate the barbell as soon as it leaves the floor. The intent is to lift the weight as fast as possible and apply 100% effort even if you are lifting a lower percentage of a maximum single. This is a good way to train a deadlift whether you are an Olympic lifter or a powerlifter. However, if you are an Olympic lifter you should be careful not to do certain things that powerlifters do.

First, Olympic lifters should stay away from the sumo deadlift. It is imperative that you deadlift exactly as if you were pulling a clean. Second, use your regular hook clean grip. Part of the reason for doing deadlifts is to build up your gripping strength. If you can get capable of doing 200 to 300 lbs. over your clean in the deadlift, then you will gain an extra psychological edge when the weights are dropped down to cleaning poundages. Also, a big deadlift gives you more deliberate control off of the floor with your snatches and cleans.

THIRD, AND MOST IMPORTANT, when doing deadlifts you should maintain the same hips to the rear, back flat, shoulders ahead of the barbell position as if you were going to do a clean. If your snatch is also weak coming off the floor, then the same practice should be applied except with a wider, snatch grip.

One popular method used by powerlifters is to deadlift 70 to 80% of a maximum single, doing 10 to 15 singles with only 45 to 60 seconds rest between sets. I used a similar routine in 1972 when I twice broke the California state deadlift record. I personally never deadlifted over 85% of my maximum in training.

It’s ironic, but a small group of powerlifters in mid-America continue to win championships and set records using Olympic training principles, yet American Olympic lifting seems to be slipping further into oblivion. Mr. Simmons and his Westside Barbell Club have found that doing just 60% of maximum on squats, bench presses and deadlifts, and then pushing to 100% max’s on assistance exercises for these lifts, gets the best results.

Doing 70 to 90 % on snatches and clean and jerks and even close to 100% just prior to a contest is more in line with what the top Olympic lifters are doing today. However, if an Olympic lifter were several months out from a competition, snatching and clean and jerking at a lighter weight and pushing max’s on assistance exercises that work a portion of Olympic movements would probably be more warranted.

The assistance exercises that an individual chooses are up to the individual. For example, working up to maximum on explosive assistance movements like snatch pulls or power cleans off of blocks should strengthen the second pull. Pulling a max on a flat back deadlift with a shrug should build up the first pull. Also, limit attempts on drop snatches and jerk recoveries should strengthen the overhead position.

It has also been recommended by Mr. Simmons that assistance exercises be changed every three weeks to avoid staleness. This shows a lot of common sense. However it doesn’t hurt to stick with something a little longer. All individuals are different. A quick rotation on exercises every few weeks may work for some but not for others. Give your training routine a chance to work.

When doing non-explosive movements like good mornings, back raises, stiff-legged deadlifts, hack squats, etc., it would probably be better to work to maximum with repetition sets rather than singles. It is important to circulate a lot of blood into exercised areas. Doing low reps too often could have a negative effect in the long run. One does not want to end up like some old-time lifters with osteoarthritis.

When analyzing the squat one might ask, does training the squat like a powerlifter work for Olympic lifters? The answer is yes, but there are some dangerous shortcomings that need to be addressed. The main reason that an Olympic lifter works on squats is to make ascending from snatches and cleans easier. This secondarily works the first pull and also makes jerking easier.

In 1971, I started a high box/low box squat routine developed by Bill “Peanuts” West and George Frenn at the original Westside Barbell Club in Culver City, California. George Frenn at that time was one of the best powerlifters in the world. He held the American record and unofficial world record of 853 lbs. in the 242-lb. class. In fact, at the time he set this record, it was higher than the super-heavy’s record. Under George’s supervision, I made immediate gains in my squat. These gains, although not linear, transferred over to my front squat. This high box/low box routine is still used by powerlifters today and has even been improved upon, namely by Louis Simmons and his Ohio Westside Barbell Club.

If Olympic lifters use a powerlifter’s squat routine they should use extreme caution. The reason is, when one hits a low squat clean or squat snatch, one’s hip rotators (See Figure 1) get stretched to their maximum. These hip rotators (priformus, gemelli, obturators, and quadratus) do not get stretched or used in this way in a powerlift squat.

The problem with doing parallel or box squats is that the hip rotators and even the glutes (Figure 2) can get accustomed to doing these shorter distance movements. These shorter movements shorten the developing muscle fibers, and they become more susceptible to injury when stretched.

Another factor an Olympic lifter needs to take into consideration when doing powerlifter squats is the change in the center of gravity of the barbell. Muscles in the lower back and hips that are usually used as stabilizers now come more into play as prime movers. Olympic lifters do all their lifting from the front side of their bodies. When doing a back-sided squat, the normal center of gravity changes. Long trunked/short legged individuals when doing back-sided squats generally can maintain a relatively upright position. These individuals can usually stimulate working the same muscles in the same way needed to ascend from a squat clean.

However, short trunked/long legged individuals generally have to lean forward when backside squatting. This throws stress in the backside muscles (glutes, hamstrings, and spinal erectors). These muscles, particularly the spinal erectors, now take on a role as prime movers more than stabilizers. Too much backside squatting in this manner can throw the squat clean racked position forward.

Using a wide powerlifter’s stance can assist an individual in maintaining a more upright position. However, the negative side of this is that you won’t be able to get into the normal low position you’d be used to in a squat clean.

To maintain a good degree of muscle flexibility to avoid injuries, an Olympic lifter should do at least 50% of all his squats as low as he would go in a limit squat clean or snatch. Doing higher short distance squats up to about 25% of the time is fine for an occasional overload to get your body accustomed to heavier weights, but done too often like a powerlifter will impede your flexibility and could lead to an injury. I say this from personal experience.

In 1972 while pulling a power snatch, I injured my left piriformus muscle. My hip rotators had been stretched to their maximum during a squat clean workout a few days before. I had some residual soreness from that workout and ignored it. Many lifters have felt the same way I did figuring they could work out the soreness.

Well, it wasn’t to be, and I got an injury that took me a year to recover from. It also took me two more years to get back to where I was before in my lifting. No athlete can afford to lose three years. I feel this mishap was a direct result of box and parallel squatting. In retrospect had I done more stretching, and hip and back care work, I might have averted this injury.

However, also in retrospect, I feel I really didn’t need all of this extra squatting. Adding 100 to 200 lbs. to your squat will not necessarily increase your snatch or c&j. I remember George Frenn never lifted any more on his Olympic lifts when he did a 700-lb. squat as opposed to an 853-lb. squat. My own c&j went up only eight lbs. when my squat went from 400 to 500 lbs. In fact, George could out-squat me by 200 to 300 lbs. anytime, yet our c&j’s were usually no more than about five to 10 lbs. apart. There is such a thing as a saturation point in squatting power for Olympic lifters.

If you can squat 10 to 15% over your best c&j for five reps, then you have nothing to worry about. A failure in a lift will not be because of a lack of squatting power. Another good comparison is a front squat of five reps equal to your best c&j. Front squats should be done in the same position and depth as your squat clean.

Another good indicator of squatting power for cleans is the no-hand front squat. This exercise will train you to sit upright while squatting. Bumper plates or spotters are recommended when doing this exercise. If you cheat even a little, the barbell will end up on the floor.

No-hand front squats are an excellent lower quad builder. Doing these in sets of two to five reps works well. You will probably handle a lot less weight in this than a hands-on front squat. However, don’t let that discourage you. If you can handle one repetition in a no-hands front squat with the same weight you can clean, you could probably spend more time on another weak point in your training and less time on squatting.

No matter how you are built of how deep you squat, everyone needs to stretch before commencing his training. A good exercise to stretch the hip rotators is to lie on the floor and pull each leg one at a time to your chest. Hold each position on each leg 10 to 30 seconds about five times on each leg. Side lunges held for five to 10 seconds are also a good pre-workout stretching exercise.

Regarding post, hack machine, Smith machine and sissy squats where the feet are in a position out ahead of the rest of the body: These, with the exception of post squats, are popular with bodybuilders and the yuppie pump-artist set. This is because there is less glute involvement in these movements. The vanity of some people prevents them from doing conventional squatting. To put it bluntly, they think they are going to get a big ass. Also, a machine can be a crutch for maintaining balance. Too much machine work or movements foreign to Olympic movements should be avoided.

As a final overview of Olympic lifters doing powerlift movements: Whether you are an Olympic lifter or a powerlifter, a common sense approach to training is to work on your weaknesses. Olympic lifting and powerlifting have evolved into two different ball games and the overlap in training is marginal. However, they are still strength sports and some of the training principle of one can be applied to the other.