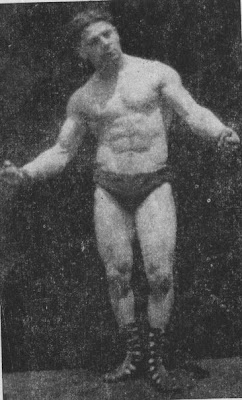 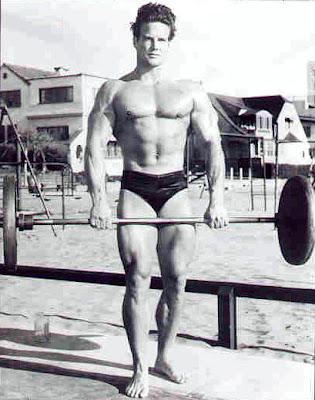 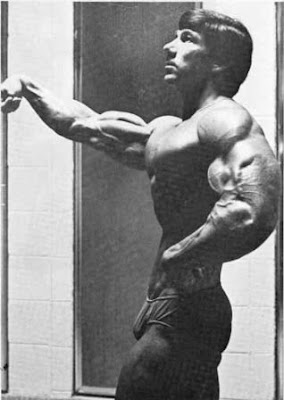 My First Quarter Century in the Iron Game
by Siegmund Klein, Part Seven


New Year’s Day, 1925, was approaching. Mr. Jowett was planning the first A.C.W.L.A. meet in Philadelphia, at the Milo Bar-Bell Company which was located on Palethorp Street. To make the show a success, Mr. Jowett arranged to have some of the best weight-lifters in the country appear. Also to be present were some of the “old-timers” in the persons of Prof. Paulinetti, Otto Arco, Teddy Mack, as well as the present-day stars of that period, Steinborn, Weber, Roy L. Smith, Art Gay, and several newcomers in the persons of Frank Dennis, Mark H. Berry, Marquis Losey, Rottan, Jack Russell and Lou Schwartz.

Mr. Jowett suggested to me a contest to be held between Robert B. Snyder and myself for the lightweight championship of America. I was eager for this match, and it was not many days later that I received word that Snyder agreed to meet me. It was the first official contest that I would enter. The lifts were agreed upon, and so on January 3rd of 1925, Steinborn, Arco, Lou Schwartz and a few other friends rode to Philadelphia for this big show. We arrived in Philadelphia late in the afternoon, and there we met scores of weight-lifters. The Milo Bar-Bell Company was then getting visitors from all over the country. Mr. Jowett was preparing the program for the evening’s performance. He asked me to open the show with some posing. It was the first time that I posed for a weight-lifting audience consisting of several hundred weight-lifters. Here I met, for the first time, Bob Hoffman.

Evening approached, and we were getting ready for the show. Naturally I looked for my opponent, Mr. Snyder. I had not up to this time met this capable and well-known weight-lifter in person. He had not, up to the introduction of the famous athletes and guests, arrived. The show started and just then Snyder arrived.

I believe it will be best to reproduce a part of the article that Jowett wrote for “Strength” magazine about that night’s performance: “The evening’s entertainment opened with an introduction of all the celebrities and performers, who received a great ovation from the enthusiastic spectators. The opening act was a demonstration of classical posing by the very capable Siegmund Klein. The lights were turned out, darkness shrouded every nook and corner, and the strains of soft music began to echo through the hall as an overhead arc light was turned on. The still form of Klein stood out like a marble statue against a black background. The murmur that passed through the crowd expressed the enraptured admiration with which the pose filled them. From one pose to another Klein passed with the graceful rhythm displaced only by one who possesses harmonious coordination of mind and body. Every muscle stood out in bold relief and the construction of the poseur’s torso was a revelation to all. Like reefs bounding a beautiful scene, the external oblique muscles stood out is such prominence as I have seen equaled only by Maxick, Arco and Saldo. From the classical poses of famous statuary, Klein passed on to an exhibition of muscle control, each muscle responding with clocklike precision to his poseur’s demand. Klein concluded his performance amidst a storm of applause that continued until the poseur came back tot acknowledge the appreciation. It was a sight that delighted my senses, for I saw the art of the poseur displayed in the fullest meaning of the word.

This was followed by Jack Russell performing hand-balancing stunts, and then some lifting by Marquis Losey. Quoting Mr. Jowett again: “The next was one of the feature events of the night, a match between the two best little men in the country, Siegmund Klein and Robert Snyder, who contested on the three following lifts – the Two Hand Continental Press, Right Hand Snatch, and the One Hand Continental Jerk. The match was intended to be for the lightweight championship of America, but the match resolved into a catch weight contest, as Klein failed to make the lightweight limit. Snyder weighed 139 ½ pounds against Klein at 148 ½ pounds. The contest commenced amidst great enthusiasm, with Snyder winning the toss and making the first lift by setting the pace in the Two Hand Continental Press with 165 pounds. Klein commenced with 198 pounds, with Bob following with 185 pounds. Klein made his second attempt amidst silence when the weight was announced at 215 pounds. Such a poundage by so small a man had been witnessed in this country but once, when Klein made 220 pounds in New York last December 11th.

“The weight was pulled in, in good shape, and then Klein pressed the 215 pounds in perfect style. The first man to congratulate him was his opponent, who is always a sportsman. Klein used his third attempt to break his former record of 220 pounds by making a try with 226 pounds. He succeeded in bringing the weight to the shoulder but immediately felt it was too much, and wisely refrained from using up his strength in fighting the poundage. Snyder concluded his lift with 195 pounds, and then they passed to the One Hand Snatch, which lift was won by Klein with 140 pounds, against 130 pounds by Snyder. On the One Hand Continental Jerk they both tied with the weight at 165 pounds. The totals of all lifts for both men were, Klein 520 pounds, Snyder 490 pounds, Klein winning the contest by 30 pounds.

“The masterly fashion in which both lifters exhibited was a pleasure to watch. When we consider that this was Klein’s first contest in weight-lifting we have to give him great credit for the sureness he displayed in his various attempts. To my mind the difference between the lifters was the difference between the young soldier and the seasoned veteran. Klein was full of enthusiasm and eager for each lift, while Snyder lifted with the experience of years behind him, and knew what he would do. His style in the Snatch and Jerk was more polished than the style used by Klein. Not that Klein’s style was not good, because it was, but between two fin lifters Snyder’s style was more nearly classical in its perfection. The Two Hands Press by Klein was much superior, due to his remarkable flexibility, which allows him to make such a wonderful back bend, while the style used by Snyder demanded the more difficult push rather than the press lift.

With the manliness that has always characterized Bob, he congratulated Klein on his win, and remarked to me how great Klein was. Snyder has always had a big place in the hearts of his brother iron men and he always lives up to his reputation. Game to always do his best, he never offers excuses, for logic tells us that only one man can win.

“Since the contest went through at catch weights, Snyder still remains the lightweight champion of America, and by reason of his win, Klein claims the middleweight championship, which is accepted by the American Continental Weight Lifting Association, since Klein is willing to defend his title against all comers on the five A.C.W.L.A. lifts.”

And thus ended my first official contest. The A.C.W.L.A. presented me with a beautiful hand-colored diploma which I still proudly possess. Getting back to New York I was congratulated on my victory and my new title by pupils as well as Mrs. and Grace Attila.

Mr. Jowett tried to arrange a contest between Oscar Marineau and myself. He was the Canadian lightweight champion, but unfortunately we could not, try as we did, agree on the lifts to be selected. I forgot about heavy lifting again for some time and got back to my regular muscle-building exercise program, which I much preferred to lifting.

It was about this time that I first met Al Roon, who now conducts a gymnasium in New York City. He was then a very muscular chap and excelled at the Two Arm Pullover. He did, I believe, 125 pounds at that time at a bodyweight of about 155 pounds. Through his efforts, I was invited to give an exhibition in Yonkers at the Columbus Sporting Club.

In the spring of that year, there appeared at the Proctor Theatre in Yonkers a weight-lifting act billed Marie Correlli and Company. This was a genuine weightlifting act, consisting of a man and woman, who evidently were of English origin, they taking the name I believe of Marie Correlli, the English writer. Bill Waring, who conducted a gymnasium in the Proctor Building in Yonkers, and who was considered one of the strongest men in America in the 155-pound bodyweight class, visited me, and told me of this act, and that a challenge was being hurled out to anyone who would come on stage and lift, with one arm over head, the first weight that the male member of the team would lift. I asked Bill if he had tried it, and he informed me that he had not, and that the weight was a kettle bell, and that he had not practiced lifting kettle bells, and he thought the weight was quite heavy and was a bit hesitant, since he was well known in Yonkers and did not relish the thought of possibly failing. He wondered if I would like to come up to Yonkers and try my ability on this weight.

I was all enthused about it. All week this challenge was made and no one, to the best of our knowledge, accepted. I could not leave the gym for the matinee or evening performance so I decided, since the act would still be there on Sunday, to got there for the Sunday matinee. In the company of John Waring and Ray Carr, we secured seats in the second front row of the theatre. As the curtain was raised for this act, there was on stage a beautiful setting.

From both ends of the stage came forward the members of the act. Both the athlete and his woman partner were dressed in full strong man regalia, with leopard skin leotard, wrist bands, Roman sandals and tights. The gentleman of the act came forward and announced that he would present ten dollars to anyone in the audience who would come forward and lift “this little weight” over head with one arm. Since no one had, during this week’s performance, come forward, he took it for granted that no one would come now. He started to walk back stage, when like a flash I jumped on stage. The woman at once beckoned her partner, saying here was a young man who would like to try. Now most athletes look taller on stage than they really are, but in the case of Correlli, he was much taller than I thought he was. He walked over to me and said, “Do you want to try and lift this weight?” I looked up and replied, “Yes, I would like to try it.” “There it is,” he said, see if you can lift the lightest weight, the kettlebell.” It was highly nickel plated, and had instead of a regulation handle, a small stationary ring, where only two fingers would grasp it. Placing my two fingers in the ring, I pulled the weight to the shoulder, and just as it came to rest on forearm, down it slid between my forearm and chest. Correlli smiled triumphantly, and I asked him to do it now. He looked at me and said contemptuously, “Do you want to try it again? I can’t hold up the act.” “All right, I’ll try again.” This time I knew that the ring was made for Correlli, and as he had a large hand, could only get two fingers in the handle. This time I made sure that I would lift it. Pulling the weight to the shoulder, I instantly brought my hand close to the shoulder, thus preventing the weight from sliding through again.