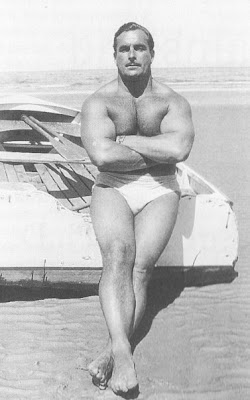 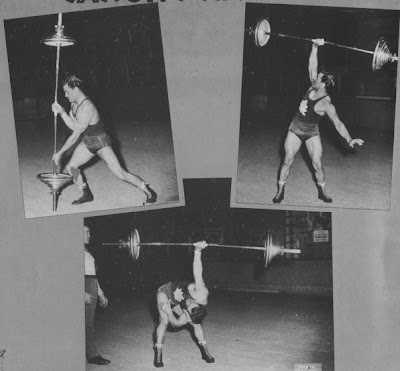 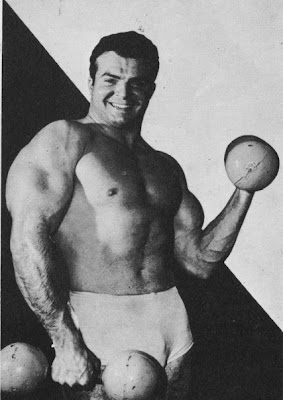 John McCallum’s “Keys To Progress” is available from IronMind
http://www.ironmind.com/ironmind/opencms/ironmind/index2.jsp


Any self-respecting student of John McCallum emerged with a number of basic principles, which ranged from squatting until your eyes bulged to achieving an overall balance in your life. The true ‘McCallumite’ knew that he certainly better not be a mirror athlete, nor should he limit himself to just being strong, flexible and having loads of endurance coupled with brimming good health. No, he should recognize that he had a brain, and he should put it to use, cultivating additional interest and activities.

So the great paradox was that the McCallumite was out to chase and capture pounds and inches with unparalleled zeal and success, but this was only the beginning – he would also end up becoming a well-rounded person in more than the literal sense. Maurice Jones was one of the principal characters in McCallum’s articles, and it’s no accident that he stands as a model of this whole-man concept.

Since Maurice Jones never sought the spotlight, articles on him were few, and largely confined to rare issues of older muscle magazines. In fact, were it not for John McCallum’s writing the larger world might never have had a chance to benefit from Maurice Jones’s example. Being a rabid McCallum ran back in the 1960s, and never reluctant to seek out someone of interest, I managed to reach Maurice Jones on the telephone, and he patiently answered all the questions a teenaged lifting nut could think to present. I’d also had the advantage then of buying a handful of photos of Maurice Jones from the venerable collector Angelo Iuspa. Recently, nearly 30 years later, I had the great fortune and privilege to once again talk at length with Maurice Jones.

Maurice Jones started lifting weights when he was about 17 years old. “As a kid I was sickly. I can remember the awful colds I used to have. I wasn’t that healthy, so that’s what made me embark on some kind of training regimen, and one thing led to another.” What it led to was the emergence of a true Hercules – a massively muscled man who was unquestionably among the strongest in the world, and whose muscular and cardio-vascular endurance could sustain labors of heroic proportions.

If we turn back the clock to the 1930s, we see a 5’9” 150-pound Maurice Jones beginning to lift weights. Although his eventual success might not have been predicted by any, his tenacity should have signaled that good things, amazing things, were to follow: If you want to understand what it means to train consistently, just remember that in his first 5 ½ years of training, Maurice Jones never missed a single workout. In the intervening decades, this dedication has never wavered. “I wasn’t away from them (the weights) for very lengthy periods. I valued it greatly. I always felt so much better when I would have a good workout. I stayed with it,” explains Jones. “I held a certain amount of self-pride, I was going to stick with it till the end. You know, that attitude, and I’m still doing that. I do lots of situps and press-ups between two chairs at times when weights aren’t available.”

As we go to press (1997), Maurice is about to turn 85, and he reports, “I’m training. I’m very active physically.” And while he laughs at the weights he uses, consider this: He still does presses and curls with 50-lb. dumbells! “That’s nothing compared to what I once handled,” he says apologetically, but if those weights don’t speak to his fortitude, consider that Maurice Jones also continues with his “outdoor activities – cycling and trail hiking.” Mountains have long been his passion so it shouldn’t be surprising to hear that there have been some accidents along the way, which have led to a string of surgeries on his back, neck, and both knees. “I’m an avid alpinist, and that’s when most of the injuries occurred,” explains Jones. “I can’t blame it on the weights,” he says with a laugh.

Currently weighing “a stable 185,” Jones say the most he ever weighed was 225, although he generally weighed 200. “I didn’t stay up at that heavy weight for a great length of time. I was quite comfortable at 200 pounds.”

Once when I was talking to Doug Hepburn, I told him that when people asked me about Maurice Jones, I’d say, “Well, picture a cross between Doug Hepburn and John Grimek.” Doug thought about that for a minute and then said, “That’s not a bad description.”

Considering that he emerged as such a formidable physical specimen, Maurice Jones’ training program should be of great interest. “I’d work out for sometimes two hours – that was when I was younger, up until probably 40 or 45 or something. That would be three times [per week], two hours,” said Jones, and when asked for an authentic workout, here’s what Jones said:

“Now the squat. One set of heavy squats up around 400 pounds – about a dozen repetitions. At that time I was still doing hiking on weekends so I got plenty of legwork there, and I’d have 30 or 40 pounds on my back in my rucksack. 400 pounds sometimes and if I’d drop the weight, I’d increase the reps.

“In between sets, I’d rest a minute – I wouldn’t sit down. I know some fellows who used to train a gym I worked at a couple of times would sit down and read a magazine in between exercises,” Jones said with a smile.

A cardinal principle in Maurice Jones training was strict style: “I always tried to adhere to good form. I couldn’t stand these guys that would come in and be curling and it would be a back exercise as well. That didn’t go over well with me at all. I wanted to see a straight body, and the arms working as they should.” Considering his immaculate form, it was remarkable that Maurice Jones used to do presses behind the neck with 200 pounds for 12 reps and dumbell curls 70 lbs. x 12 well before World War II – figure what that’s worth in today’s terms, and your jaw should hit the floor.

Asked about his squatting, Maurice Jones said “I got up into the very heavy stuff – it used to frighten me before the act. How it all came about was with Milo Steinborn: I read that he had created a world record in the deep knee bend, which I was bound and determined to break, but nobody knew anything about it. And I did get up there over 500. My memory doesn’t serve me as well as it used to, but it was around 525 pounds.” Not one to brag, Maury doesn’t bother to mention that this lift put him among the foremost squatters of the day.

Perhaps even more prodigious were his performances in the stiff legged deadlift, where he did 425 for 15 repetitions in ultra-strict style: standing on a bench, lowering each rep to the tops of his feet. If the 425 x 15 isn’t already impressive enough, consider that Jones allows that “it [the poundage] may have wandered a little higher from time to time.”

While running was not as central to his training program as was weight training, it wasn’t uncommon for him to include running a couple of times a week.” Maurice attributes his high level of muscular and cardiovascular endurance to a combination of his weight training, running and his mountain hiking. Asked if the stories of him putting rocks in his rucksack before taking off up a mountain were true, he said they were. “I used to be crazy,” he laughed. “I still do that, as a matter of fact. I put in at least 30 pounds, just to get a little additional benefit.”

It’s tempting to think that this dedication to training means that somehow training hard came easy to Maurice Jones, but that’s not the case. “I’ve put up with a lot of pain over the years, years I suffered, but I never avoided my training. You can’t do it for the best part of your life and just forget it. The way I’m built, I have to continue, obviously not as strenuously as before, but I never forget it. I guess there are a lot of weight trainers and people who have done over a period of years and are still doing it.”

Asked about his diet, Maurice said it “was just very plain. I’m afraid that I just qualify as a meat and potatoes man.”

It has been reported that Maury disliked Olympic-style weightlifting, but he said that isn’t true. “I never went in for weightlifting myself because I didn’t have the time, mainly.” Nonetheless, the first time he tried a clean and jerk it was with 300 pounds on an exercise bar, and Jones says, “It was easy for me. I couldn’t believe it, you know, once I got those legs in action. That was when they did a split, not a squat. One chap came up from California, and that was the first time I saw a squat clean, and the snatch the same way. I couldn’t figure out why he didn’t fall over when he did a snatch!”

Although Maurice worked as a graphic artist and retired as a director of the YMCA, earlier in his life he wrestled professionally in England and on the Continent. Even though this quite a while ago, some things never change because when asked about it, Jones said, with distaste, it was “as phony as anything could be.” Pro-wrestling seems out of character for Jones, but he explained, “It was a means to an end for me. I wanted to continue with my schooling, and my father was very ill at the time. I had to keep the household going.”

Asked what he’d say if a young kid came up to him and said, “Mr. Jones, do you think I should take drugs to get bigger muscles or to get stronger?”: “I would say, don’t become a fanatic, although I must have appeared that way to a lot of people. If you get fanatical about something, it spoils it. You have to recognize the line – that’s the trouble.”