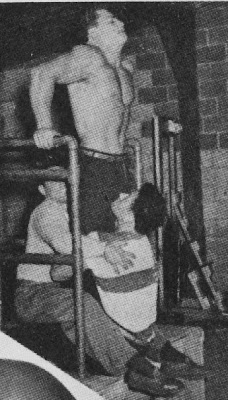 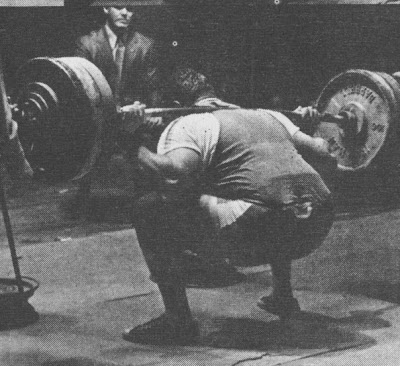 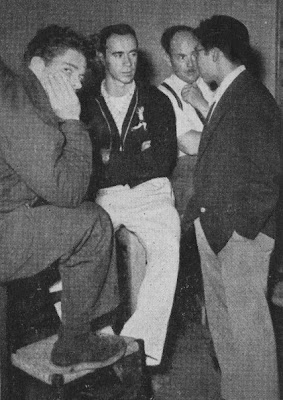 I have landed myself in hot water through being a little too enthusiastic about the new Heavyweight Champion, Doug Hepburn, and I have given American contributor Charles Smith, who incidentally has trained Hepburn since 1950, the impression that I said Al Murray trained Doug. I will now proceed with my explanation to Charles Smith.

Dear Charles,
I received your letter in which you complain about me giving Al Murray credit for coaching and training Doug Hepburn at the World Championships in Sweden. I am rather surprised and disappointed that you misinterpreted my meaning. I did not state that Al Murray taught Doug Hepburn any technique, what I did say was that Al Murray in no small way contributed to the magnificent win of Hepburn, and I also said that one of the things that surprised me was the speed and amount of technique that Hepburn showed on the fast lifts.

What I said was absolutely true, and at the time of writing I was, and I still am, full of admiration for the man who was capable of beating mighty John Davis (who is in my opinion still the greatest Heavyweight lifter in the world today). The main reason for Hepburn’s win (and here again I am talking from practical experience, as I was behind the scenes and saw what actually took place, and helped a little myself by holding Doug’s bottle of water, and offering him a little moral support when lifting), was not only his great strength or good style, but a factor that has entered into the Championships before and has been the means of winning a contest against men of greater ability.

What I am referring to is the battle of tactics, and it was Hepburn’s superior tactics plus strength and technique which won the day. It was definitely Al Murray’s great experience of competitive weightlifting and the advice that he was able to impart to Doug that enabled him to win. I will go so far as to say that had Al Murray not been present and had Doug been left to his own devices, then the tension would have been too great for him and he would not have stayed the distance. As for Al Murray teaching Doug anything, that is not the case, but when Al was in the position to coach Hepburn during the actual Championships he did so with all the power and ability at his command, and for this reason alone I again say that Al Murray played no small part in Hepburn’s magnificent win.

As regards Hepburn’s method of training, I had not the slightest idea what system he used or who advised him in his training, but I will say that with my short experience of Doug Hepburn in the gym and on the Championship platform in Sweden, there is not the slightest doubt in my mind that he has been trained on the correct lines, and I will repeat myself again and say that for a big man he is amazingly fast, and as speed in weightlifting is another word for strength, that is further evidence of good training. For a man to reach such a high standard of performance it is necessary for him to train hard over a considerable period. I am sure that neither I, nor Al Murray, would ever think of discrediting anyone connected with Doug’s training, in fact, I consider it an honor to have been on the same side as Hepburn, and I think I can say with certainty that it was one of Al Murray’s greatest moments. I hope you will accept this explanation in the spirit it is given, and that you are able to train Doug Hepburn to further honors.

Science, speed and style are not the beginning and end of everything as far as Olympic training methods are concerned, and that is now only too obvious. In fact, if the humble student cares to make sufficient study of each of the World Champions – and each of the 2nd place lifters in each weightlifting division – he can come to only one possible conclusion, and that is that the strongest and most powerful athletes usually succeed in taking premier honors.

I have always said that once Speed and Skill have been developed to the fullest extent . . . the only thing left that will be able to help the athlete is an increase in his basic power. After watching with intense interest the panorama of the World Championships held at Stockholm I find no cause to change my opinion – a flashing weightlifting style and a blinding turn of speed are fascinating to see, but sheer muscular power in most cases is the deciding factor. The fact remains that most lifters distinguish themselves in world competition because of their great muscular power, and that should never be lost sight of.

By good fortune I found myself staying at the same hotel as the Americans and Egyptians had booked in Sweden, and it was good to see the old faces again. One of the first things Dave Sheppard told me was that his friend Marvin Eder had pressed 370 lbs. at a bodyweight of 198. Marvin has done three repetitions with 320 lbs. and three reps behind the neck with 300 lbs. He is keen to become an Olympic lifter and at present is able to snatch 270 and clean & jerk 355. For those who are interested in examining the possibilities of basic power training methods it can be stated that Marvin makes sets of ‘reps’ with 400 lbs. tied around his waist when dipping on the parallel bars.

Upon being questioned, Tommy Kono said that he had succeeded with a 250 lb. snatch when trying out the fore-and-aft style. Tommy reminded me that he had made a seated two-hands dumbell press with 250 lbs. when in London some time ago. He doesn’t use this movement regularly in his training but just has an occasional ‘try-out.’

The Russian Team officials are invariably serious and on the lookout for new ideas and training methods all the time. During previous years they have seen the U.S. lifters practicing Power Snatches and Power Cleans without ‘splitting.’ At the end of one of his workouts I saw Vorobiev, to my surprise, perform three sets of ‘squats’ (half-way) with about 320 lbs. When John Davis made six full reps with 440 on one occasion they studied him very carefully. They were also interested in the Bench Press when they saw it performed at the end of the American’s training sessions.

The Russians have their own ‘power-building’ exercises also. One of their trainers hoisted a heavy kettlebell up to his shoulders and made several ‘pushes’ to arms’ length with it. As he began to ‘ache’ he continued pushing the weight to arms’ length by bending his knees a little more with each rep. He must have performed at least a dozen of these pushes before stopping, and Lomakin, who was in a very boisterous mood, grabbed the same kettlebell and made the same movement several times with either hand.

They say there’s nothing new under the sun, but I was very interested in Lomakin’s Press ‘technique.’ He power cleaned the bar twice before making his ‘rep’ presses, and not content with this, he immediately made another power clean after finishing the last rep. This makes training for the Olympic press a very considerable muscular exercise and builds increasing power as well.