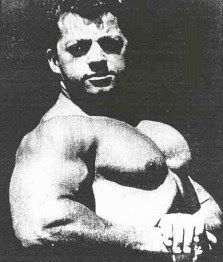 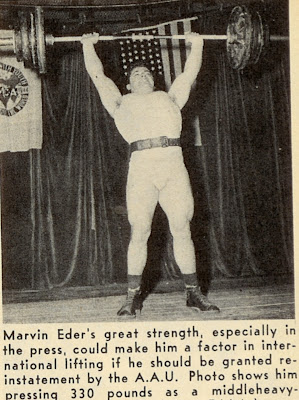 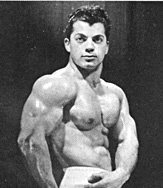 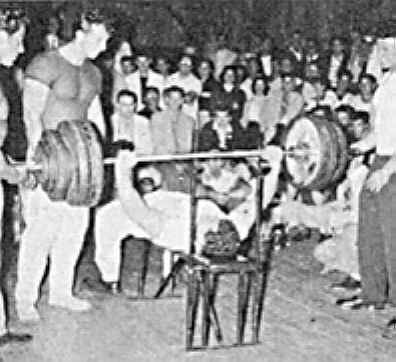 I’ll never forget the summer of 1951. I was just a skinny 150-pound neophyte bodybuilder. My brother George and I had read about Muscle Beach, Santa Monica, in Muscle Power and Your Physique magazines, so we went to that fabled mecca every day that summer. The AAU Mr. America was being held that year, and all of the top amateurs came to Muscle Beach a few weeks before the contest to train and tan. East Coast champions George Paine, Al Berman, Dominic Juliano and Marvin Eder came west to do battle with the likes of Malcolm Brenner, Roy Hilligenn, Ed Fury, Joe Sanceri and other stars.

Eder and his training partner, Juliano, were the thickest and most heavily muscled monsters on the beach that summer. Western muscle stars walked around babbling after watching them do dozens of sets using poundages that the very strongest West Coast men could lift for only a few reps.

I don’t recall what started the classic confrontation that occurred one day, but good-natured and friendly as the atmosphere was, it was plain someone’s reputation was at stake. Doug Hepburn, the Canadian Colossus, was considered the strongest man on the planet at the time. He was about 70 pounds heavier than Eder, who weighed 195. It started out as a bench press contest between Doug and the two New York teenagers, Eder and Juliano.

Powerlifting records in those days were unofficial because the AAU recognition of the “odd” lifts – anything that wasn’t one of the Olympic three. The unofficial world record in the bench was 420 pounds. Very shortly all three were flirting with that weight, doing at least two reps with 400.

The action heated up when the bar reached 420. Juliano dropped out, but that was no disgrace for a 17-year old superman. Eder, not much older at 19, blasted out two reps with 420. Hepburn also rammed up the 420. Eder then did 430 pounds in strict style – thereby setting a new, albeit unofficial, world record. Hepburn lifted the same poundage and announced the fact that he was just warming up. he then benched 440, but his form was so rough Marvin said, “Nice lift, Doug. You must have lost two inches off your chest the way the bar bounced off your pecs.” Everybody in the large crowd surrounding the workout area laughed. Except Doug.

Hepburn, who set a world record in the military press at the National Weightlifting Championships a few days later, went into his strongman prop bag and brought out a thick leather belt, with which he strapped two 45-pound plates together. He lifted the plates overhead with his left hand, then lowered them until his arm was parallel to the ground. It was known as the one-arm holdout. He held the weights in the muscled-out position for five seconds. The crowd gasped and applauded. They went wild when Eder duplicated the feat – and held the plates out for 10 seconds.

Hepburn performed several other lifts, and to the astonishment of all those present, Eder matched him of almost every test. The challenge ended with Marvin doing 10 one-arm chins with his left hand and 11 with his right! Doug responded by doing a one-arm handstand.

In all my years in the iron game I’ve never witnessed such a glorious display or raw power and strength. I’ve seen dozens of world records set in powerlifting and Olympic weightlifting, but nothing could compare to the Eder-Hepburn duel for sheer excitement.

Marvin placed third at the AAU Mr. America that year and was accorded the greatest ovation of the show when he finished his fantastic posing display. His back looked like mounds of chiseled steel, and his front delts were so big that they seemed to come right up under his face. His chest poses displayed probably the best pec development ever achieved up to that time, and he had a spectacular biceps-control shot in which the two heads of the muscle separated and one rolled up while the other went down. He was awesome. Over the years he won a number of physique contests – the Mr. New York, Mr. East Coast and Mr. Eastern America.

“In my opinion,” said Pat Casey, the first man to officially bench press 600 pounds, “pound for pound, Marvin Eder was probably the strongest man of all time.” Casey wasn’t alone in his opinion. Everybody who ever saw him perform some of his legendary feats agreed.

Muscle photographer Art Zeller remembered seeing Marvin Eder hold his arms out while a 150-pound hand-balancer named Maurice Maruitz put his hands on Eder’s wrists s though they were parallel bars, leapt up, and went into a handstand. “Eder just stood there like a rock, without quivering at all. He looked like he could have stood there all day,” Zeller said.

Actor John Saxon recalled that when he trained at the East Side Barbell Club back in the early ‘50s along with Eder, Juliano, Zeller and Lou Degni, he saw Marvin hold of his arms while Juliano jumped up on his wrists and did 10 dips!

Marvin was particularly well-known for his amazing dips. Zeller recalled that he and Juliano, each weighing 180, could hang on Marvin’s legs while he did 10 dips. I personally saw him do three reps with Juliano and Malcolm Brenner – a combined weight of 420 pounds – hanging onto him. He decided once to break Jack LaLanne’s record for parallel-bar dips, 1.000 in 20 minutes. Marvin and bodybuilder Manny Tsingis alternated doing 10 reps each without resting and blasted out 1,000 reps in 17 minutes.

Eder’s feats of strength include a 515-pound bench press, squatting 550-pounds for 10 deep reps, 12 one-arm chins and a 365-pound overhead press. At the 1951 Pan-American Games tryouts, he surpassed the world record in the press with 337 at a bodyweight of 192, but the AAU refused to let him compete. “I quit competing when I was 23,” Eder says, “because the AAU wouldn’t let me compete. They said I was a professional because I had appeared so many times in the Weider magazines Your Physique and Muscle Poser. I never received a dime for my articles or pictures. I might have set records that lasted a long time. I was blessed with God-given strength.”

Today (1999), at age 67, Marvin can still do 100 dips anytime, and more amazing, 90 chinups. I saw him last year at the Oldetime Barbell & Strongmen’s annual dinner. H told me that his three-times-a-week workout consists of five sets of chins for 50 reps, five sets of dips for 50 reps and 550 alternate jumping lunge squats. He still weighs 197 pounds and looks sensational.

Marvin Eder was the greatest all-around bodybuilder, powerlifter and strongman the world has ever seen. Modern-day bodybuilders couldn’t carry his workout bag. Remember, he performed all his fabulous displays of power without drugs or food supplements. He is sure to be a charter member in the iron game hall of fame.