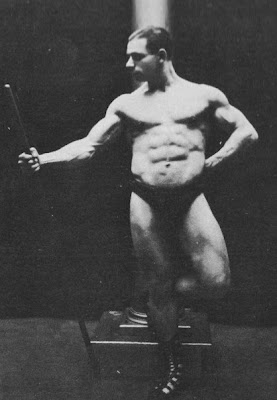 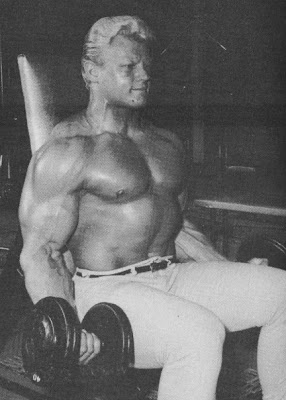 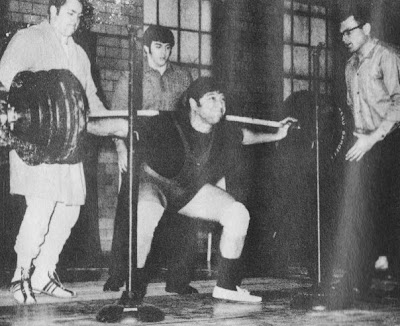 Though my association with the Attila studio was now terminated, Miss Grace Attila and I did not let business interfere with our engagement, and on January 25th, 1927, Miss Grace Attila and I were married in . This marriage electrified the weight-lifting world, and soon after our marriage congratulations arrived from all over the globe. Mr. Jowett wrote a most sentimental article in “Strength” magazine, offering congratulations, for himself and the thousands of iron men, and expressed how delighted they were to see an alliance between two such famous houses in the strength world.

George Dembinski of , , came to seeking work as an artist’s model, and while in made the gym his training quarters. We became very good friends, and it was not long after that I employed Mr. Dembinski to assist me at the gymnasium. Mr. Ignatius Neubauer, who had during the World War been called the “Strongest Man in the United States Navy” called at the gym and had several workouts with me. I will never forget how complimentary he was, and he. who had been an inspiration to me years before, now told me that I was inspiring him to continue his training. Mark Berry left the gym about this time, accepting a position with “Strength” magazine as a feature writer, assisting George F. Jowett.

After on of the shows, I received a phone call from Mr. C. Bosseron Chambers, asking me if I would be interested in posing for him. I informed Mr. Chambers that I was not available, but had a most capable young man with me in the person of George Dembinski, who would be pleased at the opportunity. He agreed. When George returned form posing he told me of the elaborate studio Mr. Chambers had at Carnegie Hall, and that he said he wanted to meet me very much. I visited Mr. Chambers a few days later and found him to be a fine artist. He showed me many paintings, mostly religious works of art, as he is about the most outstanding religious painter in the world. He used as models such famous athletes as Adolph Nordquest, Massimo and Otis Lambert. He did want me to pose for him, and I in jest informed him that I would providing I could get the painting. He laughed heartily and asked me when I would be ready to start. Not long after he painted a miniature of me and called it “Victory.” This picture was reproduced in various magazines throughout the world and was featured on the cover of “Health and Strength” in July 1929, and I used it also on one of my booklet covers which I called “Strength Victorious.

Carl Moerke, the famous weightlifter, visited the gym too about 1927, a well as Donet Plourde of the Canadian Weightlifting Federation, president of this well known organization since 1923. I was duped one day when a stocky, powerful athlete called at the gym and introduced himself as one of the brothers of the famous Saxon Trio. He informed me he was Herman Saxon, the youngest of the trio. I looked at him doubtfully, but the more I looked at him the more I thought he could be Herman. He actually resembled him in face and figure. After a short talk with him, he stripped and performed some remarkable feats of strength for me. The next few days I wrote Mark Berry of this visitor, and Mr. , instead of mentioning that I thought it was Herman Saxon, wrote in the “Strength” magazine that he was convinced it was Saxon. When the English magazines read of this, they in turn wrote how Mark Berry had been duped. Later it was found out that he was Herman Goethe, who had worked with the Saxons.

Letters came to me from all over the world. Most of them came from people who wanted to know how I trained and how I built the muscular development which my pictures portrayed. In 1926 I published a little booklet called “Super-Physique” showing some of the exercises that I had practiced. I dedicated this, my first published effort, to George F. Jowett. The first edition proved to be so popular that I had a second edition printed almost immediately. Many letters also asked about posing, and how one should go about having pictures taken, what poses to take, etc. I decided to publish a little booklet on this subject and brought out “Posing For Muscular Display” in 1926. This book also proved to be very successful both in this country and in . I dedicated this booklet to Prof. Attila.

Whenever I gave weightlifting exhibitions, even though I was trying for records, posing would usually be done first. I would follow this up by doing juggling with kettlebell, dumbell and barbell. This juggling was an art that was almost lost to the newer generation of weightlifters. From among the many strongmen I met, I learned a few stunts from those who had done some juggling. These stunts I coordinated into a routine. The exhibitions created quite an interest in the almost lost art of juggling, so I published another booklet called “Classical Weightlifting,” which taught the methods of juggling weights. I also featured in this booklet an apparatus that many of the oldtimers used. It consisted of a funnel-shaped cup, which had a weight fastened to a chain which was attached to the bottom of the funnel. I would swing this weight up overhead and catch it in the funnel. Prof. Attila had this apparatus too, and called it the “Ball and Cup.” I took the German words “ball and cup” and transposed and contracted the two into one word “Baltass.” The third booklet was dedicated to G. W. Rolandow (these booklets are now out of print).

I now started to train again for some heavy weightlifting, as many weightlifters were remarking that although I had a shapely figure I did not have the strength to go with it. I was now determined to start a weightlifting campaign and establish records. George F. Jowett claimed to have done a One Arm Military Press with 100 lbs. when he weighed 154 lbs. This was one of the first records that I went after. Training hard for this, I would in practice start with presses at 80 lbs., then 85, and follow this with 90, 95, and then try the 100-lb. weight until I had at last reached the mark that I was striving for. This program was started about three weeks before the show. I would also practice repetition presses with 80 lbs. in the military press, going up to 5 repetitions. Experience had taught me that I should go through this program every other day. I would however not neglect my bodybuilding exercises, but would eliminate for the time being the one arm presses, save for the lifting I practiced.

The night of the show I weighed 146 lbs. For record attempts at that time one could have as many attempts as were asked for. I lifted exactly as I practiced. A plate bell was used at the show. I pressed the weight that was loaded to 100 lbs. in perfect military style, to the satisfaction of the judges, and then, as all record weights must be weighed, the weight was placed on the scale, and to my disappointment it weighed only 98 lbs. This was nevertheless a world record for my bodyweight, but I wanted to hit the hundred pound mark. Smaller plates were again loaded on the plate dumbell, the weight was now weighed before the attempt. It registered 101 lbs. The weight was pressed out, but the judges, together with the referee (Mr. Jowett) ruled it out, stating that I leaned a bit to the left while pressing.

A few days after the show, Mr. Clinton Brown, who had some years before illustrated covers for “Physical Culture” magazine, visited me and asked to do a portrait of me. I was pleased with this offer, and though I had posed for artists before, I had never posed for an oil painting to be presented to me. The painting was about three-quarters life size, and is my possession today.

On Wednesday morning, September 29th, a few moments after I had opened the gymnasium, I heard frantic cries out in the hall and pounding on the entrance door. I knew something was wrong upon hearing a man’s voice crying hysterically, “Klein, Klein, open up, hurry, hurry, there is a fire in the building!” Opening the door, I found there a Mr. Burke, the husband of Anne Burke who had a costume shop on the floor above me. Working all evening and through the night to finish costumes for a Broadway show, someone had been careless and dropped a match amongst the flimsy material. In but a few minutes the whole loft was ablaze. Burke hysterically told me that his wife was trapped in the loft, pleaded with me to save her. I rushed up the stairway, but could not get at the door, for the flames were already licking the entrance. I rushed downstairs again to the gymnasium and remembered how the electrician would climb up a sign outside of the building, just outside of our windows, to replace electric bulbs of the Kit-Kat Restaurant, which was on the street level of our building. There was a little ladder on the side of the sign, and opening my swinging window, up I climbed to the loft above. Trying the window there I found that it was bolted. I saw, through the window, in the now blazing and smoke-filled room, Mrs. Burke staggering. Bracing myself as best I could against the sign, I kicked at the window of heavy plate glass. I knew that I would have to break through, so with a powerful kick, I broke the glass, slid my hand through to the window latch, opened the swinging window and climbed into the smoke-filled room. I put Mrs. Burke, who was nearly unconscious by this time, over my shoulder, and reaching the window sill, started to lower both myself and my helpless companion from the electric sign.

By this time several thousand people were congregated in front of the building, and as they saw me lowering Mrs. Burke towards my loft, the multitude started to cheer lustily and shouted Bravo, Bravo. I started to enter my loft as the fire engines arrived, and I was now asked to leave the building together with the other tenants. As I was standing on the sidewalk talking to a police officer and Mr. Burke, who had made a short speech acknowledging my heroic feat and how grateful he was for my deed, someone standing nearby shouted “Klein, look, your leg is bleeding.” Others shouted, “Get a match, let us cauterize it.” I was quite calm about it, and the police officer hailed a taxicab and drove me to the hospital, where six stitches were required to close the wound. The afternoon papers had huge headlines on the front page, mentioning “Athlete Saves Woman Caught in Burning Shop” – “Broadway Sees Athlete Rescue Woman At Fire” – “Big Crowd Thrilled” – “Street Traffic Tied Up.” Here was to me a case where a weightlifter’s strength and agility came to use in the saving of a woman’s life. I was proud that I had the strength and agility to accomplish it.