More on Oly lifting from Tommy Kono here:
The "straight line" style is seen. No S curve,
no bump or brush on the hips in the Snatch
or the gut in the Clean. This has  changed but
nonetheless, there's things in this series.

Recently a lifter started performing high repetition snatches. His reason was that as you become fatigued, lifting becomes more difficult so you have to concentrate more in finishing your lifts. He also believed while performing high repetitions that when his technique deteriorated, he could then sense this while he was in the process of pulling and would make the necessary corrections to make the lift.

With his high repetition snatching sessions completed and having  rested up a bit, he competed in the contest that followed while weighing 61.5 kg. He started with 85 kg. He then jumped to 90 kg. for his 2nd and 3rd attempts.

The high repetitions employed made him adapt to the minimal height required to make the lift; therefore, when extra heavy weights were attempted, the required stretch of the body had become foreign to him, thus lessening the leg drive and the use of his back too soon.

A lesson to be learned here is that you can perform high reps in the snatch lift but make certain you perform them using the correct technique throughout all the repetitions whether it is 60 kg. or 120 kg.

During my developmental days in Olympic lifting, I performed 20 repetition squats. I built my capacity to achieve 20 reps with 360 pounds at 153 lbs. bodyweight. Several weeks later I did 390 for 12 reps. Would you believe that my best single was only 420 then! In proportion, the reps and the single did not match. I realized then that reps and singles do not really have any relationship.

You develop enduring quality by working on high repetitions. It does not relate to a very high single repetition.

To go heavy, you have to go heavy.

Here again is the principle of training for X and expecting improvement in Y.

Years later, at a much heavier bodyweight I tried 20 repetition squats with 360. I got to 16 and quit. Of course, I had not trained on high reps and I was not willing to put out as much effort as I did when I was younger. I did not have the willpower to sustain the torture of struggling through 20 reps to win a bottle of Coca-Cola this time. At this heavier bodyweight I did manage 400 lbs. for 10 reps as a pre-condition weightlifting/bodybuilding exercise.

During the learning phase of lifting technique, performing up to 3 repetitions works well because you are trying to establish a muscle memory pattern. When you perform too many repetitions or even too many sets of repetitions, even with light weights, your coordination for a correct pattern of movement can deteriorate when too many sets are performed.

Fatigue of certain lifting muscles or inability to concentrate can lead to faulty movements, so it is always better to work on technique while you are fresh MENTALLY AND PHYSICALLY.

Olympic weightlifting competition is based on elevating the heaviest weight overhead, not on how many repetitions can be performed. Once the correct lifting technique is acquired, lights weights and a few repetitions are used only as a warmup.

The experienced lifter must learn to quickly work up to heavy weights for singles in his training because that is what the contest is based on. Taxing your mind and body is improved only with heavy weights. Anything less is only a prelude to the big weight on the competition platform.

On snatch training I recommend up to 3 repetitions during the learning stage of the lift or to serve as a warmup for experienced lifters.

On cleans I recommend only 2 repetitions for warmup purposes. The reason for one less rep in the clean is because you are employing a heavier weight in proportion to your snatch and the movement is much simpler in nature. The snatch is more complicated and requires greater flexibility, hence the additional reps to ensure your smoothness and exact movement.

In high pull movements, 2 or 3 repetitions are recommended because they are not as complete a movement as the snatch or clean. On high pulls I do not recommend singles because the lifter may use too heavy a weight and may perform the movement incorrectly. The nature of the pull has to be a duplication of what takes place in the snatch and the clean.

Even in performing 3 reps in your warmup snatches, stand upright between repetitions and pause before commencing your next repetition. In other words, make each repetition using good leverage and exacting lifting technique. 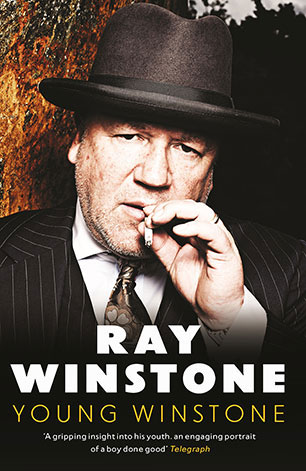 Revisiting the bombsites and boozers of his childhood and adolescence, Ray Winstone takes the reader on an unforgettable tour of a cockney heartland which is at once irresistibly mythic and undeniably real. Told with its author's trademark blend of brutal directness and roguish wit, Young Winstone offers a fascinating insight into the social history of East London, as well as a school of hard knocks coming-of-age story with a powerful emotional punch.