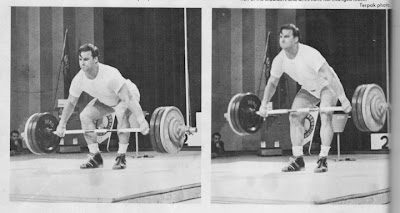 Bednarski begins his pull. Note the position of head and shoulders. The arms are used as hooks. 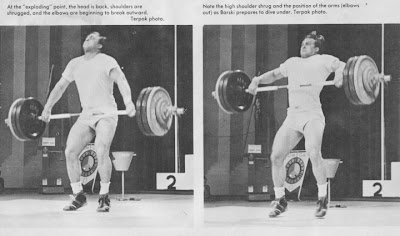 K. Kangasniemi pulling on a 430 clean. The pull is not yet completed for the legs will extend more and the trapezius muscles will come into vigorous play at this time.

Too many lifters try to use only the momentum created by the back and leg extension to succeed with a heavy Snatch or Clean and thereby fail to complete the pull. The last couple of inches of required height necessary to flip the hands over for a success-catch in the squat appear to be missing, as is the height (and the time) required to give the lifter a chance to sweep the elbows up in catching the bar on the chest in the squat clean. They lack the powerful finish in the pull.

A careful study of a lifter's movement in a world record attempt Snatch will bring to light the tremendous finish pull he achieves by the action of his head and shoulders. In cleaning, the head action is not so pronounced as in the Snatch lift but nevertheless the slight action of the head has a bearing on the finish of the pull and what head action is lacking is usually made up by a more vigorous use of the shoulders.

Many coaches do not stress the importance of the use of the head action in lifting but I feel that this movement has a profound effect in putting the finishing touch on the quick lifts and particularly on the squat Snatch. Dave Sheppard, onetime world record holder in the Snatch lift in both the lightheavy and midheavy class and almost in the middleweight class too, was the first lifter I saw with pronounced head action in all pulling movements for Snatching.

The more recent record holders who consistently WORK on the head action to the point of exaggerating it are both the Kailajarvi brothers and Kangasniemi brothers.

The head action performed correctly in the squat Snatch can add an inch or two to the height of the pull and at the same time place more emphasis on the hip action to extend the body. This in turn places your body in a better descending position for the lift. However, you can easily fall into the wrong type of head action so permit me to clarify what is correct and what is not. The wrong type of head action is that of just violently throwing back of the head from the very beginning of your pull. The correct head action is that of restraining yourself until the bar has at least reached your knee height and even then the action is that of upward movement of the head rather than throwing the head back violently. (Study the sequence photos of Bednarski's Snatch.) It is important too that even your LINE-OF-SIGHT is upward to achieve maximum effectiveness of this head action. Many lifters will tilt their head upwards during the final phase of the pull but their line of sight would be downwards which indicates that they are thinking of trying to "sneak" under the weight rather than completing the pull to make the lift. This type of attitude and condition actually sets up a negative reaction in the pull so a 100% extension of the body and maximum height of the bar will not be achieved.

In my early years of lifting I practiced the head action so much that it became an automatic part of my pull. A novelty lift that used to stump me even when I held the world record in the middleweight class was that of power cleaning 135 lbs. while balancing a two-and-one-half lb. plate flat on top of my head. Each time I tried to flip the bar onto my chest my head would jerk backward at the last second thereby flipping the plate (my lid) far behind me.


A real good technician in snatching and cleaning calls into violent play the trapezius muscles hence the effects of a contest may be felt a day or two later in extreme soreness or tenderness in these muscles more than an other muscle groups. During my real active years when it was common for me to be away from Hawaii for a month at a time for various international competitions and exhibitions, I recall how often my friends in the islands used to comment on my pronounced trapezius development each time I would return. All the lifting and pulling movements I would execute in training and in competitions and exhibitions used to heighten and thicken m trapezius muscles so the slope of the muscles would end abruptly at the origin of my deltoid muscles.

By using the powerful trapezius muscles in pulling you will achieve the following results:

1. The pull is more upright (straighter); not swung.
2. The leverage for the pull will be stronger at the finish. (Weaker muscles like those of the arms are less employed.)
3. Since the arms are not used (arms serve only as connecting links to the bar) the tension is not created in the shoulders and arms so a "whip-like" action takes place in the elbows in shouldering the weight in cleaning. For the Snatch the arm lockout becomes snappy and the shoulder is not tight when the bar is caught overhead.

Masashi Ouchi, the world lightheavyweight champion and the fantastic snatch specialist, performs many sets and reps of pulls with 440 lbs., performing the movement rapidly like the shoulder shrug exercise. It is no small wonder that the finish of his pull in the Snatch and Clean is so ridiculously easy. Ouchi informed me in Mexico during the Olympics that he practices this movement almost exclusively and performs very little actual snatching in training.

A good way to develop the correct feel for this head and shoulder movement would be by performing the standard Upright Rowing Motion exercise with either a narrow or normal grip. Begin the exercise by taking a weight about half the poundage of your best snatch weight and let the weight hang at arms' length while standing as tall as possible. With your head and EYES looking STRAIGHT AHEAD commence the exercise by concentrating on lifting your elbows up. Don't flex your arms to lift the weight up but rather concentrate on lifting your elbows up sideways until the bar comes up to the base of your neck. Perform from 8 to 10 repetitions so that by your last 2-3 repetitions you would be automatically tilting your head up and your line of sight too (and perhaps go on your toes) to complete the exercise.

If you have previously not put any emphasis on the head and shoulder action you should notice a decided improvement in your pulling technique which will give you a stronger finish pull once you acquire the feel for this action. However, if you are an "arm puller", the head and shoulder action may actually limit your record poundage. I might add here that an arm puller (one who flexes his arms a lot to pull) develops a good pair of biceps but lacks real good trapezius development simply because the arms are used more than the trapezius muscles. The arm pullers are strong in power cleaning and power snatching but lose a lot of fluidity in movement in performing top cleans and snatches hence their best quick lifts are not in proportion to their ability to power clean and power snatch.