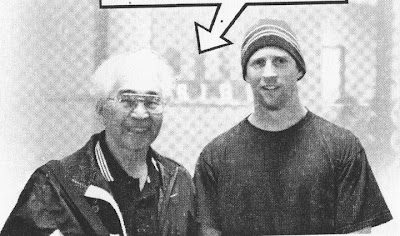 Tommy Kono with Chip Conrad
author of "Lift With Your Head" 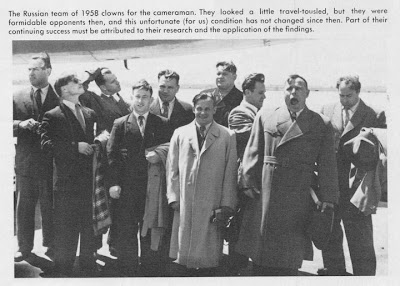 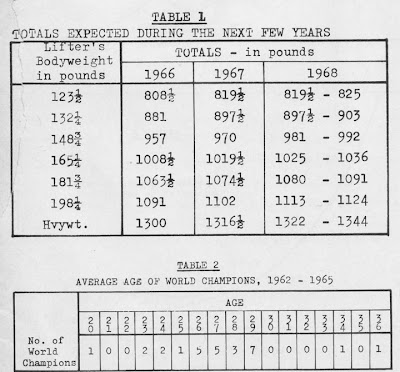 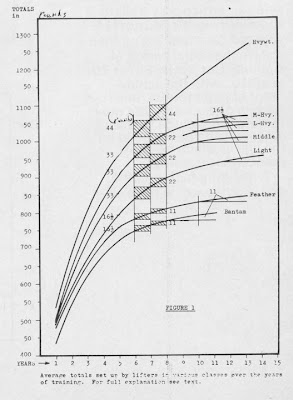 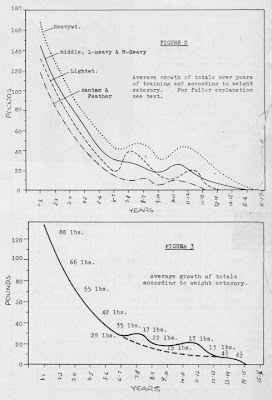 The ABC’s of Weightlifting, Part Eight
by Tommy Kono

Growth of a Lifter’s Total
forwarded by Tommy Kono, article by A. Medvedev.

In 1966 I wrote an article entitled “Anatomy of a Weightlifter” from the statistics I had gathered from the best weightlifters who took part in the 1966 World Championships. This article was published in 1967 by Strength & Health magazine. The Soviet Weightlifting Committee had been making a similar but more complete study at this same time and this was brought to my attention by Oscar State (General Secretary of the International Weightlifting Federation). I found it extremely interesting and am certain you will enjoy reading their findings and conclusions in the following article translated to English from Russian. Nothing has been changed from the original text except the conversion of kilos to pounds. The article may contain the answer for many advanced weightlifters who have been stuck in their total for several years. The newcomers to the sport can get a general idea of what to expect in the way of progress.

An analysis of the results of the last two decades will show that the achievements in weightlifting are continuing to grow steadily. On the basis of the results shown by lifters at the XV, XVI, XVII and XVIII Olympic Games, we estimate that in the near future, particularly at the XIX Olympics in Mexico, the following results can be expected (See Table 1)

The ever higher records now being set up require a more scientific approach to the training of teams for international events; we must assess the lifters’ capabilities as they are at present, and their prospect for the future.

It would be interesting to define more clearly the age at which a lifter shows his best results, and to examine whether the lifters’ active “life” in his sport may be lengthened. It is not clear to what degree and in what manner we should rejuvenate our National Team. Thus, from 1896 to 1964 the average age of Olympic champions was 26½ years (from 20 to 36 years), of record holders 27½ years. Over the last four years (1962, ’63, ’64 and ’65), the average age of world and Olympic champions rose to 27½ years. Moreover, out of 28 sportsmen, 20 were within the range 26-29 years and five within the range 23-25 years, one became world champion at 20 years of age (Ozimek), one at 34 (Zielinsky) and one (Plukfelder) at 36.

It follows that the “golden age” for weightlifters falls within the range 23-29 years.

In order to investigate the possibilities of improving an athlete’s skill, of extending a lifter’s active life in the sport, and of establishing the age at which it is best to start training in order to attain the highest indices, we analyzed the results of our 90 strongest lifters in all weight classes. The material we received in this way was “worked over” by means of statistics. As a result, totals for the classic three lifts in various weight categories were found to be as follows (See Figure 1). From Figure 1 it can be seen that the greatest growth comes within the first few years of training and up to the 6th, 7th or 8th year. Thus, from the 6th to the 7th year the average yearly increase was still 16½ pounds in the Bantamweight and Featherweight classes; at Lightweight, Middleweight, Lightheavy and Middleheavy, 33 pounds and at Heavyweight 44 pounds. Thereafter the average growth declines, and from the 10th to the 13th year of training (in the Lightweight class – from the 11th to the 14th year), the addition for three years is 11 lbs. at Featherweight, at Lightweight, Middleweight, Lightheavyweight and Midheavyweight – 16½ pounds. In further years the totals remain practically level (though the totals for Heavyweight increases by another 27½ pounds).

If we compare the development of total put up by lifters who started training from 14 to 17 years old with the totals of those who started when they were 20-23 years old, the rates of advance of total are seen to be almost the same, or with only minor differences. One can notice only a slight superiority in the former (14-year old “starters”), and then only in the initial period of training. But by the 6th or 7th year (i.e., with the achievement of large totals), this superiority disappears. One may therefore conclude that a lifter’s results do not depend on the age at which he commences training.

A deciding factor in the end result is the total time spent in training, and experience. However, this does not mean that we reject the desirabilities of early specialization, for, firstly, at an early age there are better chances of developing the necessary attributes of speed, agility, coordination, etc.; secondly, the younger one is the easier it is to achieve a high total. Thus, having begun training when they were 16 or 17 years old, G. Zdrazhila, Y. Miyake and V. Kurentsov were world champions by the time they were 23 to 25 years old, while Ozimek (having started when he was 15) was only 20.

The growth of totals stops for lifters in the Bantamweight and Featherweight classes after 12 years of training, for Lightweight lifters after 13 years, for Middleweight, Lightheavyweight and Middleheavyweight lifter after 14 years and for lifters in the Heavyweight class after 15 to 16 years of training. Thus, the lighter he weight category, the sooner totals cease to rise. We cannot exclude the possibility that as training methods are improved so the athlete’s “lifting life” may be prolonged for a number of years.

We have now established that if the transition into the next weight class comes in the 6th or 7th year of training (or even earlier), then, firstly, in the year of transition the athlete boosts his total by an average of 66 pounds (from 44 to 110 pounds), and secondly, this total increases even further after the above mentioned times. With athletes who put on weight, totals increase over a longer period. with a significant increase in bodyweight (over 6½ pounds) totals cease to grow on the average by the 8th year (from the 7th to the 10th year).

1.) Good results in weightlifting do not depend on the age at which a lifter commenced his training (provided this training began between that ages of 14 and 23), but upon the initial training.

2.) The age at which lifters achieve their best results comes between 23 and 29 years, and in a number of cases can be seen from 20 to 36 years of age.

4.) A significant increase in bodyweight (over 6½ pounds) cuts short the growth of results in the 8th year of training, on average. The transition from one weight category to another should be accomplished at the right time (say after 6 or 7 years of regular training or earlier).

5.) In deciding whom to select for teams, one should consider the lifter’s age, the standard he has achieved and, consequently, his prospects for the future.