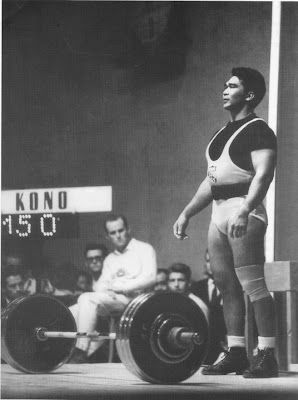 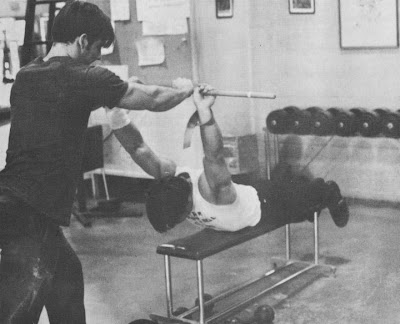 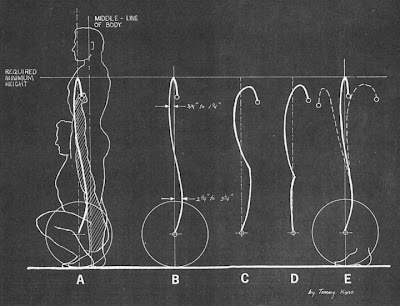 The ABC’s of Weightlifting, Part Seven
by Tommy Kono (1969)

Before going into the details of the “S pull it is recommended that you review parts II, III, V and VI of this ABC series since understanding the principles covered in these four prior articles have an important part in explaining the “S” pull principle.

Various studies have shown conclusively that a straight, upward pull is not conducive to record breaking performances in the Snatch or Clean. Movie films taken from the side angle of world record lifts show that a maximum height in the pull is achieved only when the bar follows a certain “S” pattern.


Description of the “S” Pull for the Squat Snatch

Most lifters position the bar directly above the instep of their feet prior to the beginning of their pull. As the pull commences the bar swings in toward the middle line of the body, reaching the maximum inward curve at the knees. (Follow explanation of the path of the bar on drawing A.) From here the bar begins to move away from the body and cross directly above the starting point approximately where the thighs join the hips. The bar continues to travel in the same path but begins to straighten out at waist level and then curves back to the body at chest height to make the second curve of the “S”.


Explanation of the “S” Pull for the Squat Snatch

The shortest distance between two points is a straight line and this holds true even in weightlifting; however, the barbell is not propelled by itself. The human body has many muscles and joints involved in lifting a weight from the floor to overhead and the leverage of the muscles and joints is constantly changing as the bar travels up. In essence, we are lifting the bar through a SERIES OF STRAIGHT LINES (a curve is nothing more than a series of short, straight lines), utilizing the right leverage for the different muscle groups s the lift progresses.

(1) The Initial Curve
If you have ever performed repetitions dead lifts, whether with a flat back as in the initial pull for the quick lifts or the conventional rounded-back deadlift, you’d note that each time you pick the weight off the floor the weight (bar) has a tendency to swing in toward the middle-line of the body and eventually end up resting against the front of your thighs. The more rapidly you perform this exercise for repetitions, the more obvious this swinging movement becomes. It is a natural movement since the combined weight of the barbell and the body must shift from the instep to the middle of the feet (middle-line of the body) for good leverage.

(2) The Middle Section
When the bar reaches the knee height in pulling (not dead lift) your shoulders should be well beyond the bar (Part II of the ABC series) so you have positioned yourself for the best leverage for the finish of the pull. Since the bar cannot make an abrupt change of direction without losing acceleration (Part VI, ABC series) and must also travel in the Area of Balance (Part V, ABC series), the path of the bar must be a smooth curve leading away from the center-line of the body. This, again, is a natural movement since the combined weight of the barbell and body must now shift toward the ball of the feet to utilize the best leverage of the legs (thighs and calves) and hip action (Part III, ABC series) to extend the body to achieve the greatest height for the bar.

(3) The Second Curve
Should the bar continue to journey away from the body the bar would travel out of the Area of Balance forcing you to lose control of the weight; so, to prevent this from happening it would be a natural movement to KEEP THE BAR AS CLOSE TO THE BODY AS POSSIBLE and USE THE WEIGHT OF THE BARBELL AS LEVERAGE TO PULL YOUR BODY UNDER THE WEIGHT. The reaction of this movement would be that of pulling the barbell back toward the initial starting line (over the instep); hence, the second curve section of the “S”.

The action of the wrist flipping over and the descending of the bar causes the loop at the finish of the pull.

Figures C and D show the general pattern of the path of the bar which has struck the thighs and bounced away. Figure C is that of the mid-thigh striking the bar. Figure D illustrates the pattern of lifters who feel they must pass the bar over the knees and striking the bar with the lower part of the thighs.

Drawing E helps illustrate that even a proper beginning is no assurance the finish of the lift will be good. The dash lines indicate the wrong finish. The curve of E-1 shows the proper height necessary for a successful catch in the squat snatch. Numbers E-2 and E-3 show the loss of height in the pull because of the bar traveling out of the Area of Balance. The height of the pull was lost in proportion to the distance traveled horizontally out of the Area of Balance.

Using the proper “S” pull with a heavy weight, a lifter can make a successful Snatch by getting the proper height as shown in Figures A, B, and E-1. Should the same lifter using the same weight pull in a faulty pattern, the bar would achieve only height shown in drawings C, D, and E-2&3; a height that is insufficient for a successful lift. Many times the lifter will make the proper adjustment by jumping backward or forward because of the faulty pull to create a new Area of Balance but with a personal record or near record weight the bar ends at arms’ length but with the wrist not flipped over for the proper catch.

The pattern of the curve for all lifters, in general, is alike. The deviation of the curve from the center line (not the middle-line of the body) varies according to the height of the lifter and other factors such as the length of the feet, the placement angle of the feet for the initial pull, the width of the grip on the bar, the length of the arms, etc., etc. But, the general pattern has produced the measurements shown in Figure B. Figure A shows the general height and pattern that is ideal for a lifter approximately 5 ft. 6 in. in height. Zhabotinsky’s pull height has been measured at 59¾ inches with a drop of the bar only 5 inches before he caught the weight for the Snatch with 352 lbs. Former world record holder in the Clean & Jerk in the lightweight class, Schgun of Russia, snatched with a pull of 49¼ inches before catching the weight in an enormously low squat. Schgun measured 5 ft. 3 in. in height.