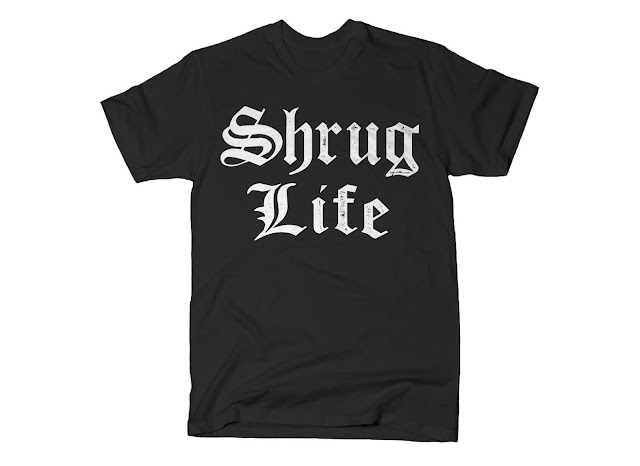 
We're all guilty. Caught ourselves peaking in the mirror while we were building up over the years to see what kind of fascinating if not amazing changes were taking place in our physiques. Even the most disdainful of bodybuilding among us, the most hardcore strength trainer or competitive lifter, is not immune.

Why, lookey there, one might muse. My bicep is showing bifurcation. How about that? Am I getting striations in my pecs and delts. My quads? Must be a sign of progress. Of course we serious athletes are not concerned with such. Such merely visual results of training won't put five more kilos on the C & J, will they?

Still, etched-out serratus might be cool at the pool next summer. But we don't care about that, right? That's for gym-weenies, ain't it?

I was no pimply adolescent when I chanced upon the possibilities of shrug variations. I had lifted off and on for almost fifteen years and wrestled here and there. Fantasies of physical grandeur were fading before the demands of raising a family and struggling though grad school. But I could not help but be intrigued and my vanity tweaked by a few body changes as I experimented in the garage of the old home place.

Dave Maurice mentioned in his review of my book KELSO'S SHRUG SYSTEM that a few of the 30 variations in the tome are for "aesthetic bodybuilding" purposes.

Let me focus on those for ironheads who are still tempted by the mirror or concerns about their appearance. (Why is it on the forum threads about outfitting a home gym that there is plenty of talk about power racks and glute-ham gizmos, but no one seems to ever bring up the one item I'd bet usually gets installed first? The mirror).

Speaking of serratus, that group of small muscles that fan out like a bunch of stubby fingers on the side of the rib cage between the front of the lat and the lower pectoral and lead into the top of the intercostals . . . 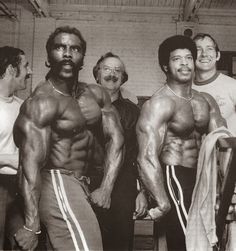 . . . assuming your body fat percentage is low enough for them to show - how can a "shrug" help those?

Try what I call the Shrug Dip in combination with straight-arm pulldowns from the overhead pulley.

When I was eighteen or so training at the old Commerce Street gym in Dallas (where the wrestler Hugh "Tex" McKenzie worked out) . . . 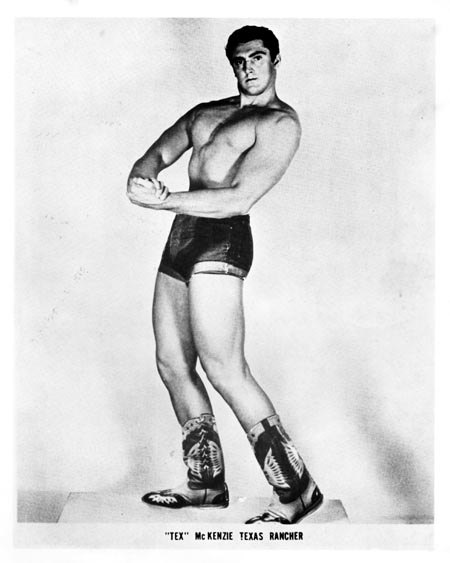 . . . there was a very short fellow training whose name I can't remember. He was amazingly muscular and cut up. Had giant serratus. Best I ever saw. How did he get them? Probably from his habit of doing straight-arm pullovers lying on a flat bench - with over 100 pounds!

I never forgot that sight, nor did I ever achieve anything close to it. But the most growth I ever realized in that area came this way:

- Shrug Dips. Take a position on the dipping stand as if to, well, dip. But, do not bend the arms. Lower the body by allowing the shoulders to rise toward the ears. This would be the negative of a standing shrug with dumbbells. Raise the body by forcing the shoulders down, forcing a good contraction of the pecs, lats and serratus. Leaning forward works the chest muscles more; leaning back throws the cramp into the lats. For a little extra work on inner pectoral cleavage, a set or two of Bench Shrugs with dumbbells held palms facing should help.

- Straight Arm Pulldown. Stand in front of overhead pulldown machine. Start with a light weight. Take an overhand grip with hands 12-14 inches apart. Don't lock the elbows and turn them slightly out. Lean a little forward and adjust your body so that your position mimics that you would have on a flat bench with the bar lowered behind your head during a straight-arm pullover. Then with arms extended as described force the bar all the way down to the thighs while exhaling. This triggers a large muscular contraction in the pecs, serratus and lats. Let the bar rise back to starting position while inhaling. Get a stretch and repeat. You will have to experiment with body position a little to make it work for you. Everybody is different. A side effect may be an extreme burn in the triceps late in the set.

Keep sets and reps in the normal ranges. Super-setting is extreme.

I mentioned wrestling. I was tall and lanky with a long neck as a teen. Wrestlers bridges and towel pulls with a partner got my neck up to 17.5 inches at a bodyweight of 200 lbs. when I was 19. Not bad, not good, but beyond pencil-neck status.

Articles about Steve Reeves doing wide-grip deadlifts intrigued the gang at the old Dallas YMCA. This was 1955. We'd load the old York Olympic plates with two-inch rims on backwards, the wrong way, so we could bend down and pick up the bar by the flanges on the plates. Or, we used a collar-to-collar grip, depending on our arm lengths.

- Wide-Grip Shrugs or Deadlifts. Reeves and others believed doing deadlifts in this fashion would widen the shoulders. I think it is pretty established now that not much can be done for the bone structure of the shoulders, but I got a different result when I began shrugging in this manner. Maybe it was because of my long neck, but I never developed the blocky traps visible on many lifters who did thousands of cleans and DLs. Instead, I ended up with a long slope that made my shoulders look wider. (Yes, I also did a lot of cleans and snatches and DLs over the years, so there may be a hereditary factor involved).

In any case, I developed a clearly delineated trap insertion or connection at each side of my nick, where the trap seems to run up close to the ears at the base of the skull. This was most noticeable when viewed at an angle from the front. As I had pretty pronounced sternocleidomastoids, there was a separation or groove between the sterno and the front of the trap at the side of the neck. I was the only kid on the block with that feature. I have rarely seen it since on others.

Looked kinda rugged if I do say so. Drew a lot of sideways glances when I wore a loose wide-collared shirt. Which I did. Often. No vanity in play, of course, I was merely trying to be a good example to the young and communicate my interest in their training. Especially to girls.

Cable Crossover Shrugs. A similar effect can be gained by doing cable crossover shrugs with the machine set on the low pulleys. Stand in the middle with a handle in each hand. The line or direction of contraction is from the bases of the machine toward the ears at an angle to the floor, not up and down. A second movement for developing and etching out a unusual muscle is to do shrugs in from the side with the machine set on the high pulleys. Concentrate on the contraction right between the shoulder blades or lower to carve out middle and lower traps. A possible third exercise, but not a shrug, would be to stand between the pulleys - set on high - and row straight in and down to the sides with each hand, trying to touch the elbows together behind the back. You can't do it, but try.

Hiro Matsumoto owns a gym in the town in Japan where I live. I trained there for years. We experimented with the elbow touching move. We used a couple of young bodybuilders as lab mice to see if the movement would help develop the "Christmas tree" lat structure at the sides of the lower erectors. It did on one guy and not on the other. The successful guy had shorter arms. Maybe that was a factor.

One thing about doing the movements I've written about here, and I would add the Lat or "Kelso" shrug in the bentover row incline position as well as chinning shrugs [you can search this blog for more from Paul Kelso, including many exercise descriptions], is that they carve out the separation line between the front lat and the side of the chest as seen from the front, and bring into visibility a lot of the smaller muscles in the upper back and in other places where you'd least suspect it. Higher reps are indicated for "aesthetic" purposes, and a pretty thin fat-to-muscle percentage.

Is it true that "All, all is vanity," as it says in the Good Book?

That's a hard statement to shrug off, but
shrugs can give you something to be vain about.