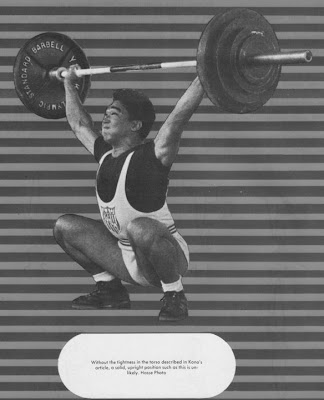 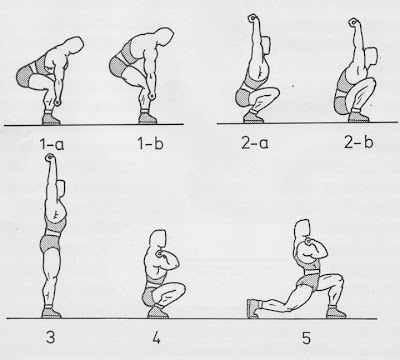 In the last installment we spoke about the action of the hips in lifting. This month I want to stress the importance of keeping your spine fixed in all pulling movements in the Olympic lifts for efficient lifting technique.

Probably the most obvious thing a person notices when he views a weightlifting competition for the first time is that the good lifters all seem to appear stiff in the back when they lean over to grasp the barbell or when they commence their lift. The back appears extremely flat of even exaggerated and concaved in the middle.

In the sport of weightlifting it is extremely important that we cultivate a certain amount of flexibility in the joints such as the ankles, knees, hips, shoulders, and wrists if we expect to have very efficient lifting technique and be able to lift respectable poundages; however, this does not apply to the forward flexibility of the spine. Without going into the use of technical and scientific terms let it suffice to say that the vertebrae which comprise the spine should be held fixed so that the back becomes inflexible from the base of the skull to the hips during the pulling and supporting phase of the lifts. It would be well for lifters to imagine their 24 loose, individual vertebrae as being fused together and with an unbendable iron shaft running right through the middle of the vertebrae to form a solid column.

When I first began competitive lifting I used to think of the individual vertebrae as being round balls with a hole running right through the middle of them. And, like beads strung on a string, an unbreakable cable ran through the middle of the balls (vertebrae). When I exerted tension on the "cable" from the hips my spine would align properly, and like the little toy animal made from wooden beads mounted on a wooden paddle with strings, the tautness of the cable would bring about the required stiffness to keep the balls stacked one on top of the other. Any slackening of the cable or string would make the balls (vertebrae) or beads give in to the effect of gravity, causing a limping or drooping of the mass.

When the lift is commenced in Cleaning of Snatching, the flatness or arched-in appearance of the back must remain the same and this tension to keep the back fixed must be maintained throughout the lift. (See Illustration 1-a.) If at any time there is a buckling effect of the back during the pull the efficiency of the body is lost for an accelerated pull. (See Illustration 1-b.)

The aforementioned method of starting a pull is harder than just starting with a hard yank but with the correct flat back or concaved position, the second and more important phase of the pull becomes stronger. (Refer to Part Two of the ABC's series.) The idea behind starting the pull in such a manner is so that the in initial pull is begun with the legs and the action of the back is delayed until the bar has at least reached the knee height.

Should your back buckle while in the process of pulling, whether in the initial or second phase of the pull in quick lifts, the leverage for the finish of the pull and the correct receiving position is lost.

Maintaining a flat or arched-in back gives you several advantages over the "just pull harder" type of movement:

1.) To avoid the buckling affect of the back the start of the lift is begun slowly; not with an all-out-yank.
2.) The control of the bar is maintained over a longer range.
3.) The Acceleration Theory can be put into practice.
4.) The back is fixed to go into the correct receiving position for the lifts (Cleans or Snatches).

Retaining a flat or arched-in back in the pull is not so easy when you are not accustomed to fixing the back position but it can be learned by constant practice and by being aware of this position at all times when working out with weights and doing the pulls.

Back in 1959 or 1960 Sports Illustrated magazine interviewed me and mentioned that when I grasped the bar and took a deep breath I would assume a "pouting pigeon" position before I began my pull. This description caught the imagination of quite a few lifters at the time and helped them improve their quick lifts.

A point to remember in the pull is that ANY UPWARD MOVEMENT OF THE HIP, BACK OR SHOULDERS SHOULD BE ACCOMPANIED BY AN EQUAL MOVEMENT OF THE BARBELL. If this is not achieved the back has buckled under the exertion and the good mechanical advantages have been lost.

There are some lifters who are anatomically unable to achieve a flat-backed APPEARANCE even though they can achieve the FEELING of a flat back. This is usually the case with lifters with extremely long legs in relation to their torso or with lifters who have extremely long thigh bones in relation to their height. Some lifters may have an unnatural curvature of the spine which makes it impossible to acquire a flat APPEARING back. It is important for these lifters to maintain the feeling of a flat back so the back remains fixed in its position throughout the lift.

A lifter who retains the flat back or arched back when the weight is received on the chest in the squat Clean can get added advantage of "bouncing out" of the bottom of the squat Clean. (See illustration number 4.) If the back buckled or humped over at the impact of the bar on the chest in the Clean (a sign that the spine relaxed at the peak of the pull or before it reached the peak), the balance of the lifter and the weight is shifted toward the heels, throwing all the work on the back muscles for the lifter to come out of the squat Clean. This is also true for a lifter catching the weight in the Snatch. (Study illustrations 2-a and 2-b.) A good technician can literally bounce out of his Cleans and Snatches in the squat or split style IF the back is fixed and the balance is correct for the lift.