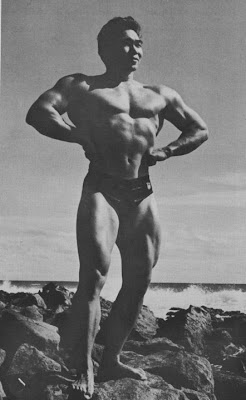 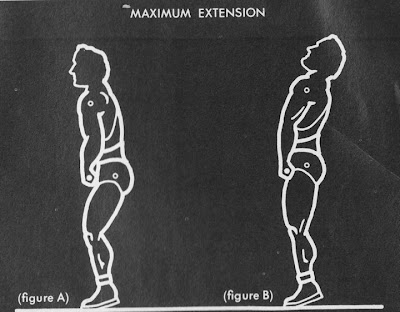 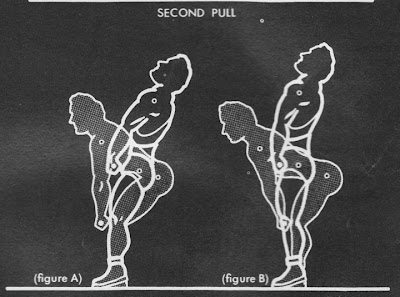 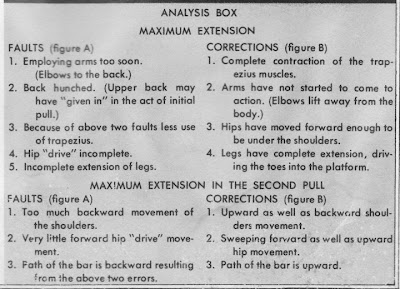 The ABC’s of Weightlifting, Part Three
by Tommy Kono (1969)


This month we cover the third and most devastating error committed by a majority of good lifters in pulling for the Snatch and Cleans; a common habit that beginners fall into when they attempt heavy weights too soon.

In an interview with the Soviet Union’s chief coach Dr. Arcady Vorobiev, he mentioned that the biggest fault made in the Snatch lift by international calibre lifters was that, “They try to go under the weight too quickly.” In other words he meant that these champions do not fully exploit the strength they have in pulling the weight up because they fail to get maximum height in their pull. They tend to cut their pull short and try to go under the weight quickly instead.

Study figure A and note all the faults listed in the Analysis Box. In figure A the lifter is attempting to bring his shoulders down to meet the bar rather than bringing the bar up to meet the shoulders. This is akin to the previous article on the initial pull where the lifter started with bent arms to bring his shoulders closer to the bar. A lifter who is in this position will not have a strong finish pull but, instead, will have a strong “first” pull because he has dissipated his pull and now must rely on speed of movement to get under the bar to catch it overhead (for the Snatch) or on the chest (for the Clean).

A lifter who uses his arms too quickly on the first pull has fairly well developed biceps; especially is it pronounced where the biceps join the forearm. An “arm puller” also has less trapezius development because the biceps are called into action much more than the trapezius.

In figure A the upper body is still inclined forward a bit which means that the bar will be away from the body, giving you an additional disadvantage on leverage for the pull.

Now, study figure B and note the corrections listed in the Analysis Box.

In figure B the lifter has stretched his body as much as he can. The bar is traveling upwards too for the lifter is making every effort to lift his elbows directly up. This comes about because of the lifter’s effort to get a maximum UPWARD contraction of the trapezius muscles. The lifter even has his head tilted upwards as well as his line of sight. THE WHOLE CONCEPT OF THE PULL IS TO STRETCH OR LENGTHEN THE BODY AS MUCH AS POSSIBLE BY EVEN TRYING TO CRANE THE NECK AND LIFTING THE CHEST UPWARDS.

Assuming that you have extended your body as much as possible to give you maximum height and then you contract your trapezius to the “craned neck” position, and at the same time driving down hard on the platform with your toes, you will have achieved as much height as possible on the pull with the least use of the arms. THE LESS ARM POWER YOU USE TO PULL THE WEIGHT UP THE MORE BODY POWER AND BODY LEVERAGE YOU MUST EMPLOY TO GET THE PULL, the correct way to achieve maximum pulling power for the Olympic quick lifts.


Maximum Extension in the Second Pull

In the article previous to this in the ABC series, I mentioned the importance of having your shoulders well over the bar when it reaches knee height (beginning of the second pull) position. This was to get you into the most powerful position for the second and more important pull.

Note the shaded drawings. In figure A only the shaded head is beyond the position of the bar while in drawing B approximately half of the shaded body is beyond the bar. In figure A because the major portion of the shaded area is BEHIND the bar, the lifter has his body weight resting toward the rear of his feet. When the body is extended in the second pull the lifter pulls the bar towards himself and backward because the body is EXTENDING TO THE REAR. Note how the bar, in figure A, has traveled backwards from the knee height position to the extended body position. This causes the lifter to jump back to catch the weight. The bar has also separated from the body in the unshaded portion of figure A which means you are losing some of the leverage for pulling.

In figure B the lifter has not only brought his shoulders backward but because of his correct shoulders-over-the-bar position at knee height the hips have driven forward and up. The shoulders moving backwards is counteracted by the hips moving forward. The end result is the bar traveling in an upright path instead of backwards as in figure A. If anything, the bar actually travels a little forward since the balance is brought more forcefully over the balls of the feet.

Extending the body to get the maximum height is most important but the extension must be UPWARDS and not backwards as in figure A.