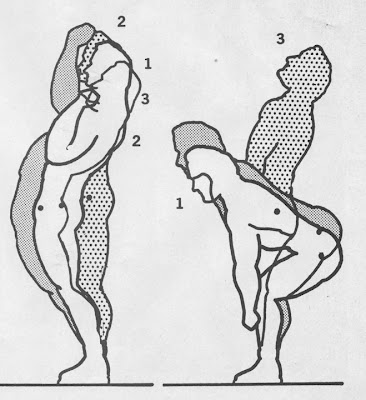 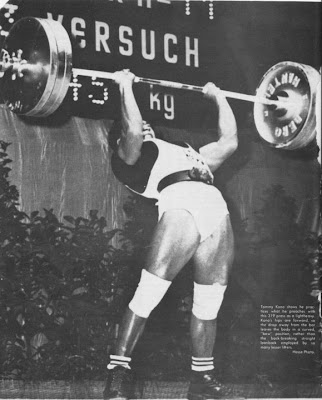 The ABC’s of Weightlifting, Part Nine
by Tommy Kono (1970)

In the accepted present style of pressing used internationally, the action of the hips probably has more influence on the success or failure of heavy presses than the additional power developed in the deltoid and triceps muscles.

When former world and Olympic lightheavyweight champion Rudolf Plukfelder of the USSR was able to press 330 pounds in competiton, I asked him what he was capable of pressing in strict style. I recall exactly what he said. “Strict, strict 286 pounds. Ahhh, but Lopatin’s best strict press is 220 pounds!” Serge Lopatin, the Soviet lightweight was then the holder of the world record press with 297! The key to their high press is not so much in their pressing power but rather in their pressing technique. And the secret, if you choose to call it such, of the technique lies about 80% in the action of the hips.

The accompanying drawing “A” helps to explain more clearly than verbally how much hip action takes place when a top lifter employs good technique in pressing. The lifter’s starting position is the bold-line, unshaded figure. He then starts the upward motion of the bar by a quick backward movement of the hips so his body comes out of the “bow” (see rear shaded area). As quick, if not quicker, the lifter goes back into the bow by shoving his hips forward (see shaded front area) before the bar has a chance to slow down from its initial drive from the body. There is a tremendous amount of hip “play” for a world record press but it is performed so fast and so smoothly that usually the vase amount of hip action and (and many times the knee action too) goes undetected by the naked eye.

By bowing or wedging into the weight you shorten the height of your physical structure so your arms are able to bypass the “sticking point” of the lift.

Generally speaking, while the American lifters work toward developing greater pressing power to improve their competiton press, the European lifters strive to develop greater speed of movement (hip action) so they can “bow” into the weight easily and spend less time on developing power for pressing.

In snatching or cleaning, your hip action (or lack of it) determines whether you will jump back to catch the weight and/or your pull will be incomplete. In illustration “B” the unshaded figure (starting position for the pull) shows the body at an extremely bad mechanical disadvantage for the pull. The hips are farthest away from the bar horizontally than at any other time in the execution of the lift. The idea in pulling must be to try to get the HIPS TO MOVE IN as close as possible to the vertical pathway of the bar.

Figures 1 (starting position) and 2 (shaded figure) of illustration “B” shows that the hips have moved only in the vertical direction, but from Figure 2 to Figure 3 you can see the great sweeping forward and upward movement of the hips. This key movement of the hips is what creates the surge of power in the second phase of the pull.

If the lifter is to go into a clean or a snatch in either the split or squat technique from the Figure 3 position (maximum extension position), the hips of the lifter drop straight down into the squat or split for a perfect technique lift.

The hips are the center point of the body and the power and body movements radiate from this area. Fluidity in lifting technique can be attained only if there is good action in the hips.