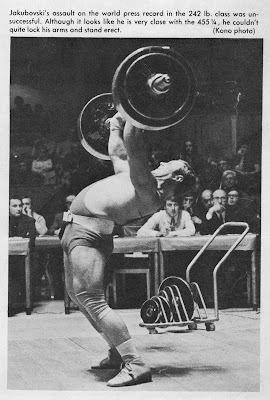 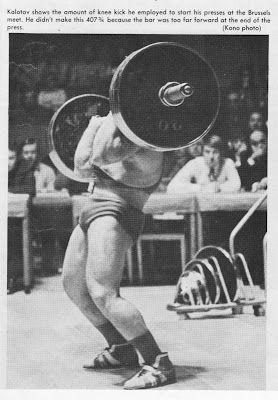 Not long ago I received a letter from one of America’s best lifters asking for my advice in regard to improving his total so he can win a gold medal in the coming Olympics. Here was a man who I believed was America’s answer to wresting the crown from the Russian last year but he never came through because he never corrected his one basic fault.

This lifter is probably THE strongest if not one of the strongest lifters in his class in the world yet he will not reach his cherished dream of becoming an Olympic champion unless he corrects his pulling technique. He is already amazingly strong but this very advantage is offset by his reliance on power to make his lifts rather than employing this power in good technique.


Recently, I started coaching in a new location where a number of good lifters have collected. The “home coach” had built up the capacity of all the lifters to train long and arduous with extremely heavy weights. But, the one thing he forgot to check was the quality of the training. It wasn’t enough that the lifters developed the capacity to sustain hard training over a long period of time but the movements performed needed to correspond with the technique in lifting.

Too many lifters try to improve their totals without ever trying to correct their weaknesses. Lifters have a tendency to concentrate on their strong points or best lifts and neglect to correct faults or their weaker lifts. In the case of the lifter who wrote me asking for advice I advised him to work on correcting his pulling technique rather than spending time developing more power.


The modern lifter can no longer count on power alone to win world crowns nor be a specialist on one lift or be good in two of the three lifts and become a world or Olympic champion. A lifter must be able to win a medal in all three of the lifts at the world championships if he expects to win the championship.

I have seen at the European and World championships where some lifters mount the podium to receive their gold medal in the Press lift only to be the first of 10 or 12 men in their class who must start in the Snatch. I’ve witnessed the Czechoslovakian middleweight Hekel win a gold medal in the Snatch with 308 lbs. and be the first one to start in the Clean & Jerk with 352 lbs. at the European championships.

Having coached in Mexico for three years and now three years in W. Germany I have had very little contact with the American lifters for the last six years but I do get the opportunity to see some of the best U.S. lifters in action each year at the world championships and during the Olympics. Naturally, being an American, I take a special interest in the U.S. lifters and watch them train and lift every chance I get during these Championships. From my observation I’m convinced the U.S. lifters are as strong if not stronger than their opponents but it is also evident, as you study their training and see them lift on the competition platform, that they lack the “wholeness” of the champions. This “wholeness” is developed only when the lifter has trained himself to be efficient in all three of the lifts by working on developing power and technique.

A CHAMPION IS A CHAMPION BECAUSE HE WORKS ON HIS WEAK AREAS RATHER THAN SPECIALIZING ON HIS STRONG POINT(S). A CHAMPION KEEPS IMPROVING BECAUSE HE IS WILLING TO WORK ON THE EXERCISES HE DISLIKES INTENSELY FOR HE KNOWS THAT IT IS NECESSARY. It isn’t difficult to succeed in what you can do well already.

If you are a good snatcher but weak in the Press lift you should hammer away on the auxiliary movements to improve this lift plus work on the technique of the Press to being this lift up in relation to your other lifts. If you perform the minimum of movements for the Snatch and Cleans during this time and really concentrate on improving the Press lift, a two-month program should do wonders to improve this lift. During the two months your quick lifts may suffer a little but you can always bring these lifts up by getting back to your normal training routine.

The foregoing is very similar to a bodybuilder who has a good overall development but lacks good calves. By hammering away on the calves, giving it “priority” in training, the calves will respond and have a chance to come up to par with the rest of the body. It doesn’t make sense for the bodybuilder who has extremely large arms as compared to he rest of his physique to concentrate on making his arms even bigger at the expense of the other body parts unless he’s out to win only the “Best Arms” award in the physique contests.

I recall a lifter who didn’t particularly care for the squat exercise when he first started lifting. It always seemed like so much hard work he kept the number of sets in this exercise to the minimum. He showed steady improvement in the Press and Snatch but somehow his Clean wasn’t progressing as fast as it should and he always seemed to lack power to finish his jerk. Rationalizing later that leg power was his key to a higher Clean & Jerk he forced himself to bomb his legs with lots of reps and sets and really specialize in developing his leg power.


Although he disliked the heavy work at the beginning after a month of intensive squatting he began to like the exercise. In fact, he developed the feeling that a training period wasn’t complete without some hard or heavy leg work. The lightweight set a goal of squatting with 340 lbs. for 6 sets of 12 reps to be performed within a half-hour. I remember the day he achieved this goal. After taking a shower and getting dressed he had trouble ascending a flight of stairs. He went on to make 20 reps with 360 and 12 with 390 a few months later. Yes, with this kind of leg power I had no trouble standing up with any weight I was able to squat clean. My Clean moved right up from 310 to 341 in the lightweight class. This was a world record weight (341) at the time and I cleaned it on my 2nd, 3rd and 4th attempt at the 1952 Olympics only to fail the jerk. Incidentally, I missed the jerk portion of the lift because of faulty technique and not because of the lack of leg power.

In Germany a very good mid-heavy who snatched 308 moved up a class. The added 22-24 lbs. in bodyweight did wonders to his Press for in a very short time this lift climbed from an official best of 330 to 419 but his Snatch only improved 5½ lbs. Knowing his Snatch was his weak lift he started performing a lot of Power Snatches in his training. He got so he could Power Snatch 286 but because he worked on the wrong phase of the pull he became extremely strong in pulling but unable to use this power in the squat technique. When competition time would approach he would start working on his technique but the moment the bar would approach 286 he would miss the Snatch. Out of frustration of not being able to perform a squat with it he would Power-Snatch it. He has snatched 330 officially on one occasion but his usual Snatch in competition is 308 or less. He still performs a lot of Power-Snatching even though he was told to quit “powering” the lift and practice only technique snatching. His fault is not the lack of power but the lack of technique in both the pull and the actual lift itself.

Many times even a short, intensified specialization program can bring a lift right up simply because you put your mind to it. I recall the time I was to lift against a Russian lifter for the world crown and just three weeks before the championships the Associated Press had carried the news that he improved his old world record by two pounds by pressing 306. My best Press was 295 at the time. The day the American team arrived in Stockholm our featherweight Isaac Berger went directly to the training hall to see the Russians train. I remember Isaac coming back to our living quarters an hour later informing me that he had seen my opponent Press 297 for two reps and he seemed capable of making a third rep if he wanted to. With competition only six days away I knew that I could not improve my power to Press more than 297 (we used to Press without much “sin” then) and he showed he might be able to Press 308. I needed to make up the 11 lbs. difference with the quick lifts but I also knew from his past performances that he could Snatch as well as I and I had only a slight edge over him in the Clean & Jerk. I decided that in this short time I could get my Snatch lift up if I concentrated on technique. I had developed a reputation of losing my first two attempts on the Snatch so I thought I could spring a psychological surprise for my opponent by making all of my attempts on the Snatch. I felt too that I had enough power to Snatch a world record if I used the power correctly. I trained three days in a row on the Snatch technique, working on the last part of the pull where I felt to be the weakest.

I won over the Russian by outlifting him in all three lifts and coming through with a world record total. I even surprised coach Bob Hoffman by succeeding with all three of my Snatch attempts and by establishing a world record Snatch with my 4th attempt. My Russian opponent failed to Press more than 292, his starting poundage, because he was overtrained on this lift.

One of the secrets to becoming an outstanding athlete is to recognize your weak point and correct it by mapping out a program to erase this weakness. You must “plan the work and work the plan” as one success axiom goes. To be a champion you must be a tough-minded, hard-headed realist.

Series made possible with the help of Regis Becker and Reuben Weaver.