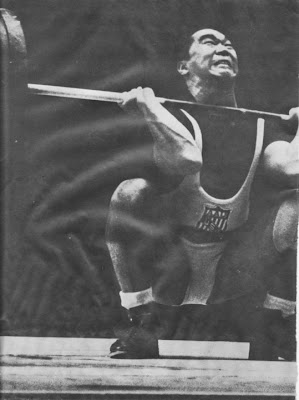 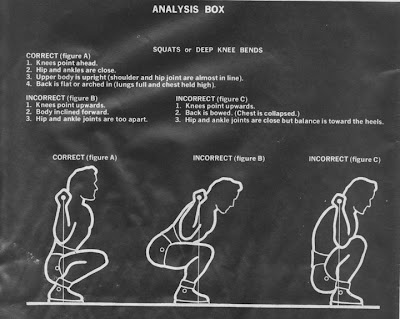 The ABC’s of Weightlifting, Part Four
by Tommy Kono (1969)

In this installment of the ABC series the information presented is directed more toward the benefit of the squat style lifters; however, the material in this article can be useful for both bodybuilders and power lifters.

Generally speaking, a majority of the squat technicians in the Olympic lifts can pull into the shoulders more weight than they can rise with. Or, should they have the ability to stand up from the squat clean they lack the extra power in their legs to jerk the weight overhead. This is often the case despite the fact that the lifter had performed many sets of heavy squats in training.

Improper squatting technique not only wastes the lifter’s time but also gives him a false sense of power in the legs which do not really serve him well for the squat style clean & jerk. What then, constitutes good technique in the squat exercise which will aid in the Olympic lifts?

The drawings accompanying this article show three of the variations used by the lifters of which one is the better style. Note the differences in the three techniques and figure why one is better than the other two. Compare the following explanation with your own.


Detailed Explanation of the Correct and Incorrect Methods

Figure “A” shows the body in an upright position which places all the stress on the thighs in coming out of the deep squat. Figure “B” illustrates a squat with the back inclined forward which takes most of the stress off the thighs and places it on the back. “B” technique employs a larger number of muscle groups so a greater load can be handled in the squat BUT it does not improve the cleaning ability. This is the style usually employed by the power lifers to get record poundage. A renowned superheavyweight not only employs this technique but also rides the bar NOT ON HIS SHOULDERS but almost on his mid-back; that is, below the rear deltoids. He also uses an extremely wide stance which brings into play muscle groups of the inner thighs. the MORE MUSCLE GROUPS EMPLOYED AT ONE TIME THE GREATER THE WEIGHT THAT CAN BE HANDLED. But, it doesn’t mean that the cleaning ability will improve.

Why is the inclined style an inferior technique to use for the squat clean? In figures “A” and “B” imagine the bar resting on the chest instead of on the shoulders as in the squat clean and it will become more obvious. In the upright squat position it makes very little difference but in the incline technique the body is forced to become more upright to rest the bar on the chest. This means that the advantage of using the back muscles becomes less; consequently, more stress is thrown on the legs, a muscle group unaccustomed to the load since it had shared the load with the muscles of the back.

Squatting correctly for lifting requires a certain amount of flexibility in the ankles, knees and hips. This is achieved by stretching the calf muscles and the frontal thigh muscles and an ability to flex the lumbar muscles to tilt the pelvic girdle back.

The key points to remember in performing the squats for lifting are:
(1) Try to maintain a flat back with your chest held high (lungs filled with air),
(2) Keep the upper body as upright as possible as you descend into the squat, and
(3) Attempt to bring the hip joint as close as possible to the ankle joint when you reach the bottom of the squat. This means that the knees (viewing from the sides) will have to point forward and not upward.

Some lifters go into the full squat in the correct manner but instead of rising correctly they either fall into the lean forward technique or lose their flat back and collapse into a “bow” as in figure “C” to relieve the legs of the load and throw it on the back muscles. They can do this in the regular squat but the moment the bar is shifted from behind the neck to in front of the neck as in the squat clean then the effectiveness of the squat exercise is lost. Use the lean forward or “bowed” position and eventually you develop a thick set of spinal erector muscles; especially where the bow is the greatest. Use the bow technique and you also find yourself developing a thicker waist because of the pressure created in the abdominal region and from the thickening of the lower back muscles.

In all of your squatting movements in training whether the bar is resting on your shoulders or in front of your chest, always try to squat with your upper body as upright as possible. Incline or bow your back if you have to with the extremely heavy ones but try to execute the squat exercise correctly for the greatest benefit for your clean & jerks.