Note: To all the lifters in Italy, living for the time being with a decree that effectively closes all gyms . . . hang in there!

About Sandor Gere: On the trip to Tokyo, I wanted to get some inside information that would make interesting and informative articles for our (Strength & Health) readers. However, knowing that I would be very busy at the Olympics performing my duties as team manager, I looked for someone else to obtain the information. Sandor Gere fit the requirements perfectly. He was one of the top Hungarian weightlifting coaches before coming to this country and since coming has established himself as one of our leading weightlifting coaches. In Hungary he personally coached such lifters as Veres, Huszka, Toth, and Foldi. In the U.S. his star pupil is Gary Hanson, the National bantamweight champion. All these qualifications add up to a man that knows lifting, the lifters, and the language of many of the foreign lifters. His help in obtaining this information is deeply appreciated.
- John Terpak. 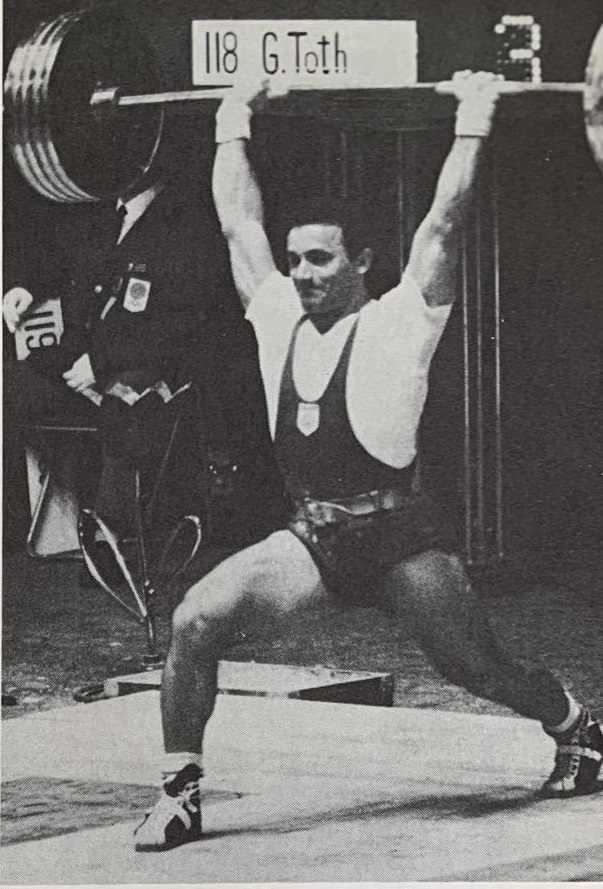 The name of Geza Toth is not new in the history of weightlifting. the 32 year old Hungarian has invested 12 years of hard work, but it has paid off well - he is one of the best lifters in the world.

He lives in Sorokpolany, a little village next to the Austrian border. Geza was born and raised there, and in his youth he worked on his father's farm. In his teenage years he was sports minded, and after a hard day on the farm he would rush to the soccer field. Although he loved the sport as did other youngsters in his country, he was not particularly successful.

At the age of 20 years, he entered a college preparatory school for physical education. At school he met a pupil of mine who showed him a copy of Strength & Health magazine. Geza admired the muscles and strength of the athletes pictured and felt an urge to emulate these men. That same afternoon he accompanied my pupil to the gymnasium. It was at this gym that we first met.

At first Geza was unsure of himself, particularly after seeing the smaller Huszka, who had started only a few months before, Jerk 198 pounds, for Geza could only manage a lift of 145. However, I encouraged him and he came to trust me.

At the beginning of his training, he lifted three times each week. After the first year of training, we raised this to four times a week and after the second year Geza began to train five out of every seven days.

His first competition was on January 9, 1953, in a meet for beginners. He won the Middleweight class with a total of 510 pounds. In 1955 he made his first Hungarian records with a Clean and Jerk of 319 and a total of 759. In honor of this performance, I presented him with a miniature miner's lamp on which those records were engraved.

In 19655, no wait, that's much later, in 1965 he became a member of the Hungarian National Weightlifting team for a contest against the Austrians. He almost failed to make a total, barely managing to hold his third Clean and Jerk of 297 pounds, after failing with this weight on his first two attempts. This was a valuable experience for Geza, for it taught him that he was one of the team and had to be careful in his selection of poundages. The same year he lifted for Hungary against the Germans. He tied Helbig with a  total of 743 pounds, but he lost on bodyweight. This was another valuable tactical lesson for Geza. In 1957 he placed fourth in the European Championships with a total of 814 pounds.

1958 was the year of his graduation from college and his many examinations kept him from serious training. However, he finally finished his studies and began to teach physical education in two high schools near his home town. At this time he moved up into the light-heavyweight class, although he was unable to move his bodyweight past 172 pounds. This was an awkward weight since it was too light for the light-heavyweight class, but too heavy to make the weight reduction to the 165-lb. class feasible. Nevertheless, he managed to place ninth in the World Championships of that year with a total of 869 pounds.

In the European Championships in 1960 in Milan he finished in fifth place with a total of 885 pounds, although still weighing only 172. I was living in New York City by this time and in one of his letters Geza asked my advice on gaining weight.

Based on my experience in the United States, I suggested taking vitamin B-12 pills and injections combined with heavy training. In 1961 in the World Championships in Vienna he managed to increase his bodyweight to 178. Of this competition, Geza says, "This is the competition that I will never forget, because this was the first time I stepped on the winner's platform in major international competition. I was fortunate enough to defeat the world famous Tommy Kono in the very last minute of our exciting contest. 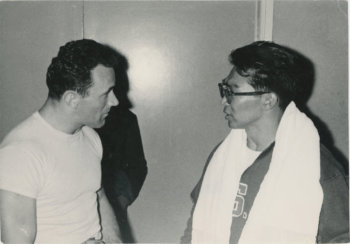 "After the Press, which is my weak point, Tommy was leading by 22 pounds. In the Snatch I manged to lift 297, but he still led me by 16 pounds. This meant that since he was the lighter man I would need to Clean and Jerk 22 pounds more than he. He began with 352 and on his second attempt with this weight, he was successful. I started with 363 and was successful. However, on my second lift with 374 I missed because I crossed my legs slightly when cleaning the bar, causing me to lose my balance. Concentrating intensely, I was able to manage this weight on my third attempt which gave me a new personal record of 952 pounds and a third place in the championships. I must admit that I was lucky because I was not yet able to beat Kono at his best. Originally, he was able to compete in middleweight class, but since he was unable to make weight he was forced to lift with the light-heavyweights. This put him at a great disadvantage since he had tried so hard to get down to to the 165-lb. limit."

1962 was a stark year for Geza. He started well in the spring, but because of an injection he contacted hepatitis. He spent five weeks in the hospital and another six weeks at home in bed. It looked as if this would be the end of his weightlifting career. In fact, he was so informed by his doctors and he had to sign a document stating that any further lifting would be his own responsibility. It seemed unlikely that he would be able to represent Hungary in the 1962 World Championships in Budapest. However, he gradually began training, although he had less than six months to regain his form. His comeback was miraculous and he totaled a wonderful 974 for third place.

During my interview with Geza in Tokyo, he told me, "Tommy Kono is my idol and I have always admired his fighting spirit and good sportsmanship."

Geza prepares for two months before major competition, dividing this period into two equal parts. The first week he spends a great deal of time with light weights, only going into the heavier weights during the second week. The third week sees him lifting the heaviest weights of his first month's training. During the fourth week, he gradually eases off with his poundages. He repeats this procedure during the second month, but in each week he uses slightly heavier weights than he did in the corresponding week of the first period.

Geza trains six times each week. He has two types of training that he alternates. On Monday, Wednesday and Friday, he concentrates on the Olympic lifts and performs squats at the end of the workout. He considers the squat to be a basic and essential exercise for every weightlifter. On Tuesday, Thursday and Saturday, he performs assistance exercises. The exercises that he stresses are;

All of his workouts take from two to two-and-a-half hours. He rests very little during his training.

"I enjoy competition," he told me in the Olympic Village during our reunion in Tokyo. "I take part in three or four meets before the European Championships which are usually held in the spring. After that I participate in another three or four contests before the World Championships which are generally held in the fall. During the summer I slow down my training for about two weeks, partially replacing my lifting with swimming and other sports. I enjoy using gymnastics for loosening purposes and I practice 10-15 yard dashes to increase my speed. I also practice leaps of various sorts for elasticity and spring. I stay away from ball-playing so as to avoid injury."

Heavy, greasy foods are popular in Hungary, but Geza stays away from them. During the last week before competition, he eats less food and food of lower caloric value. For two or three days before the meet, he eats more sweets, but on the day of the competition he eats very little, sometimes eating nothing at all, because it seems to cut into his energy. He uses steam only when necessary to lose the last pound or pound and a half. He usually weighs four or five pounds above his class limit and he feels that he can lose those pounds without having it affect the good condition of his body.

There are two main factors in weightlifting - power and technique. I asked him his opinion as to which he considers the most important and he answered me by saying, "Technique is very important, especially in the first few years. If someone learns a bad technique, it is very difficult and sometimes almost impossible to correct. The technique I learned when you [Sandor Gere] were coaching me often allowed me to defeat lifters who were stronger than I. The quick lifts depend to a great extent on technique, as does the modern Press.

However, weightlifting is a sport of strength and you cannot be a good lifter without developing power. Power is equally as important as technique and I would say that we cannot separate these two factors."

For an increase in power he suggests assistance exercises for all parts of the body. He suggest squatting for leg power, power snatches and power cleans for pulling power, incline presses for arm and shoulder power, and ONE-HALF GOOD MORNINGS WITH RAPID STRAIGHTENING FOR BACK POWER.

Geza is not a gym lifter. Although he is able to reach the peak of his press in training, his best snatch in the gym is from 10-20 pounds less than in competition. Also, his best gym clean and jerk is 10-15 pounds lighter than his best effort in competition. He is 5/7.5" and he feels that he belongs in the middle-heavyweight class.

As a physical education teacher his favorite hobby is his pupils. Besides his teaching duties in the two high schools (one for boys and one for girls), he has formed a weightlifting club and he has 55 pupils training under his supervision.

He tells me that it gives him greater satisfaction to see progress in his students than in himself.

He is a fine young man, well liked by his students and by his townspeople.