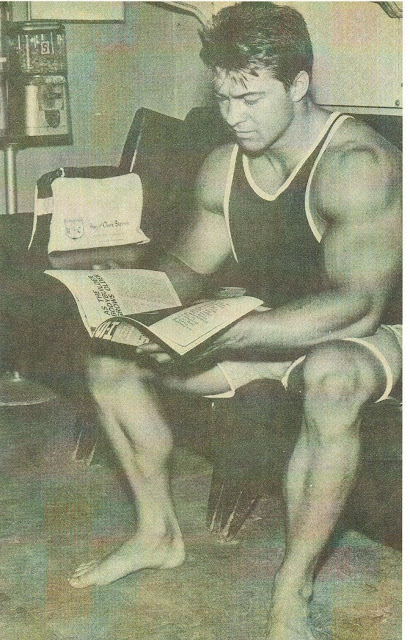 I have seen perhaps six men in my life do a chin properly. Don Howorth was one of them. Don pulled up with his chest high and touched his chest to the bar almost as low as his pec line. His elbows were drawn down to his sides touching his lats, and with the chest high and the shoulders down and back he contracted his lats to the maximum.

If you look up the function of the lat in any kinesiology book it will show that the lat - when in the fully contracted position - the shoulders are drawn down and back! Round the back and shoulders forward and you shift to the teres major muscles. Also, if you do not arch your back to full contraction you will not develop any of the fibers across the back that attach to the spine. This will give you a flat underdeveloped look with no thickness. 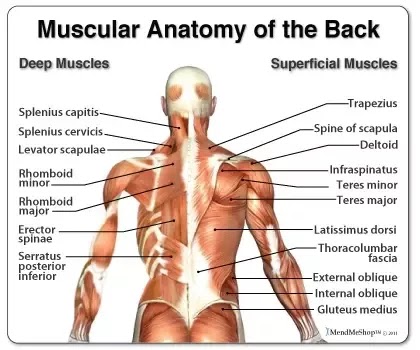 This is how you do the chin:

Reach up and grasp the chinning bar, but not too wide . . . closer than you ordinarily do them because the lats are only partially contracted in a wide grip. Next, stand on a box so you can jump up into the contracted position and hold at the top for a split second. Now, lower your body and stand on the box (do singles). Jump up again and touch your low pec to the bar and arch the back. Most important - elbows must touch the sides in the top or contracted position to achieve maximum contraction.

The next most abused exercise is the parallel bar dip for pec development. The average bodybuilder does this exercise with his elbows back and his chest up and the back arched. Also, he does not drop down low enough, plus his body usually swings due to excessive speed in performing this exercise. The proper way to dip is as follows:

Hands should be 32" wide, elbows straight out to the sides (never back), and chin on chest. Chest must be concave and back rounded, feet forward under the head. In short, the body is in a crescent shape. The bottom of the dipping movement is the most important part of the dip; the first 8-10 inches are very isolated pec and most important - dipping receives less help from the deltoid than any other pec exercise. Bench press + Incline DB Press - knuckles not facing each other but forward about 90%, assistance from delts. The wider the parallel bar the wider the stress on the pec where the pec disappears under the front deltoid. This gives the chest a great illusion of width.

Here, in Vince's Gym, we have V-shaped parallel dip bars and by just moving your hands back you get a wider portion of the pec. By the way, if you hump your back at the top of the movement you work the Serratus muscles very forcibly.

This is a vastly misunderstood muscle insofar as the most common exercise for this muscle (the press) is not a side or lateral head movement. All overhead presses, barbell or dumbbell, are front deltoid and add nothing to shoulder width. They only make the shoulder thicker when viewed from the side.

On the posing platform the overhead lights wash out this portion of the deltoid. But side or lateral head shows up advantageously because of the shadows cast by the overhead spot. The lateral head is best obtained with lateral raises with dumbbells, providing you do not turn the front of the dumbbell up higher than the back bell because if you do you are working the front portion again. To work the side portion (lateral) you must keep the back of the bell higher than the front (closest to the mirror) and as we say in the gym - "pour the water out of the front end of the bell."

The beginning part of the lateral raise is to touch all four contact points of the two bells in front of the thighs with the elbows bent slightly - arms are never straight or locked. Also, as you raise the bells to the side they stay out in front of the body and must not travel backward parallel with the body.

The last part of the raise: never raise the bells higher than the ears because if you do the trapezius assists by dropping the deltoid closer to the head (hunching movement).

The next exercise for the delts which I find is very good is the barbell upright rowing. The relationship of the upper arms is exactly the same as the lateral raise, except that more weight can be employed. The grip is the secret here - most bodybuilders hold the hands too close together. I find that a slightly narrower than shoulder width grip is best. Also, if you pull the bar any higher than slightly higher than the nipples the trapezius assists and takes the work away from the delts. Also, when you pull the bar up do not keep it close to the body but out and up to the top position.

Do the upright rowing right and you can receive results very quickly.