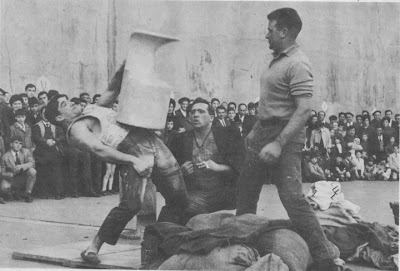 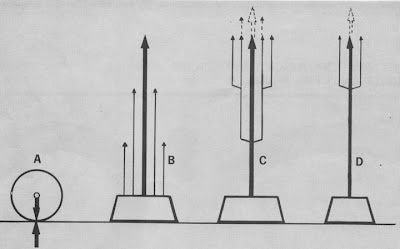 The ABC’s of Weightlifting, Part Six
by Tommy Kono (1970)


A Theory of Acceleration as Applied in the Pull

In this installment I hope to convey to you literally and graphically the idea behind the pull employed in Snatching and Cleaning. Applying this “pull theory” I wish to develop the idea a step further to illustrate that “banging” the thighs with the bar does not add impetus or acceleration to the bar in the quick lifts.

Let us now study figures “B” and “C”. The trapezoid represents a certain weight. The thick arrow, the amount of force which is slightly greater than the weight of the trapezoid. The thinner arrows indicate additional forces.

Figure “B” shows maximum force being applied on the block of weight. Since we can apply a burst of full force only for a short period we have used it up at the beginning of the pull which means the finish becomes weak. This might be similar to a bullet leaving the muzzle of a gun pointing straight up into the sky. The bullet leaves its source of power at a tremendous velocity but as it begins to gain altitude it loses its speed and eventually it would have spent its momentum (from friction of the air and the constant pull of gravity) and halted its ascent. Then, it does an “about face” and starts descending, picking up speed as it comes plunging down to earth.

Many good weightlifters pull in this fashion. They believe that a tremendous yank can get the bar traveling and then they rely on the momentum to get the bar up to the proper height. While the bar is traveling up the same lifter feels he can now concentrate on going down under the bar. This is one of the reasons why the “yankers” catch even the light weights with a terrific impact on the chest. I have seen more than one national champion injure his knee cleaning a weight in this manner with his record attempt.

In figure “C” the same amount of arrows (indicating force) are shown as in figure “B” but in the reverse arrangement. Here the idea has been to apply more force as the weight gains height so at the peak of the pull the greatest amount of force is applied. The idea is similar to that of building up the speed of an auto from a dead stop; acceleration. In this method of pulling even after the pull force has ceased the momentum developed by the acceleration will carry the weight (barbell) a little higher before coming to a halt and starting its descent.

The acceleration of pulling is important for two basic reasons: (1) The bar continues to travel upwards even after the (accelerated) force has been cut off as in the case when the lifter loses contact with the platform with his feet in going into a squat or split, and (2) The reaction of pulling the hardest at the end of the pull means PULLING THE BODY DOWNWARD EQUALLY HARD WHEN THE FEET LEAVE THE PLATFORM in squatting or splitting.

The acceleration method of pulling makes the lifter extremely dynamic and fluid in action when the maximum pull and descending transfer of force is made. This method of pulling also insures a “softer” catch when the bar is received on the chest or overhead as the case may be for cleaning and snatching, unlike the hammering effect of the “yankers”.

Figure “D” is drawn to show how a light weight is handled using the principle of acceleration. Not all of your maximum explosive force is applied at the finish of your lift. The beginning pull is prolonged before the “gear shifting” takes place. The lighter the weight the more prolonged is the power of the initial force applied before fuller force is called into play.

If you have been “yanking” the bar off the floor try employing the acceleration method of pull and see how much higher you can pull the weight in performing your High Pull exercise. Wear a pair of wrist straps and wrap them around the bar and use the above method of pulling. Have someone check the height of your pull. Can you match the height with the same weight using the “yanking” style?

Now, let us proceed to part two of this installment which is in regard to “banging” or striking the thighs with the bar in pulling. Since the rule was passed by the FIHC (now called FHI) several years ago, which allows a lifter to “graze” the thighs above the knees in the act of pulling, many lifters have deliberately cultivated a technique which “bangs” the thighs, believing that this action will assist them in lifting a heavier weight. I know of one very good lifter who strikes the bar on his lower abdomen and wears a foam rubber pad at this particular area in his trunks for this purpose.

Study the accompanying drawings of the cars. Drawing “A” shows a car striking the guard rail and continuing to drive. At point one (1) before the car struck the railing it is traveling at 70 miles per hour. Would the car have a faster speed at point two (2)? Same speed? Or slower speed?

Now, study drawing “B”. In “B” the car comes close to striking the guard rail but at no time comes in contact with the railing. If the car speed is 70 miles per hour at point three (3) what will be the speed at point four (4)? Faster, slower or the same?

Any striking or sharp turns by a car will slow the car down rather than help to accelerate it. So it is with the movement of the barbell. Hitting any part of the body with the bar while pulling not only slows the bar down but can throw the bar out of the correct path and make you lose the necessary leverage to make the lift. Striking the bar with the body usually causes the bar to go into a swing rather than to stay in a pull. Usually the hitting of the thighs is more deliberate in the Snatch lift than in the Clean (I am not referring to Power Cleans here).

When the “grazing the thigh” rule was first introduced the Soviets did so because they had learned from their various studies that the bar MUST be pulled close to the body in order to achieve the greatest pulling efficiency. They discovered too that in pulling the bar close to the body the thighs often “brush” against the moving bar. “Brushing” or pulling close to the thighs means added leverage to your pulling power but to strike the bar on your thighs is a definite detriment in your quest for an accelerated pull.

If you find “bouncing” the bar off your thighs assists you in developing a stronger pull then YOU HAVE NOT ACQUIRED THE RIGHT PULLING POSITION FOR THE FINISH OR SECOND PART OF YOUR PULL! More than likely you have positioned your body wrong after the initial pull, a point already discussed in Part Two of this series.