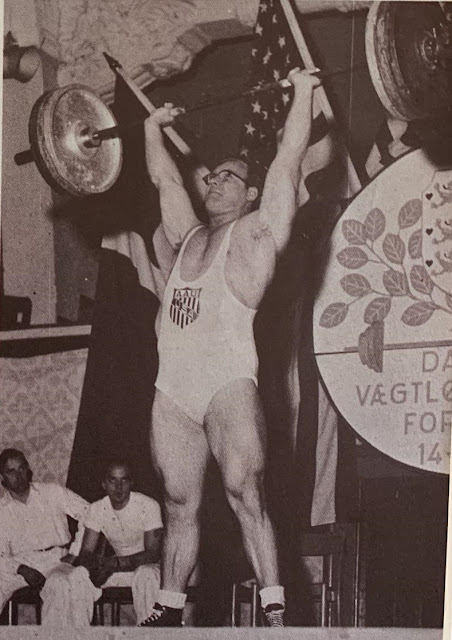 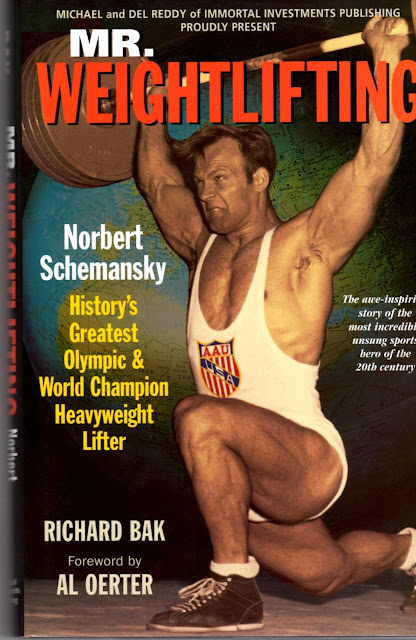 Two years ago a guy who had amazed the world with his lifting accomplishments lay flat on his belly in a Detroit hospital. A second delicate operation to correct what is popularly known as a slipped disc had just been performed on him.

"He'll never walk again," and "He'll be lucky to walk again after this one," are typical of the comments that were heard when news of the operation found its way around lifting circles. But Norbert Schemansky, the "ole Professor," former Olympic, world, and national champion thought otherwise. Hard luck was nothing new to him, and the fact that the odds were against him didn't phase him one bit. Less than two months later he was back in the gym training for a second comeback.

"Ski" put it this way in a recent letter (article "as told by Bob Hasse). "After my second back operation in November 1957, I started training in January 1958 for a second comeback. I did mostly bench pressing, press of rack, rowing motion, and curls. Using lights weights such as 250 pounds for 10 sets of 3 reps in the bench press, 175 for 10 sets of 3 regular presses taking the weight off the rack, rowing motions with 70 to 100 pounds for 10 sets of 5 reps, and a few curls were enough to get me back on the right path. During these first few months of training I made sure I did everything with a very straight back.

"Beginning early in March I started training for a contest that was being held three weeks later. I did light cleans up to 250 pounds in addition to the exercises mentioned before. In the contest my lifts were 300, 260, 320, 880 total."

That April I saw Norb at East Lansing during the staging of the National Collegiate Championships. His upper body was a picture of power - deltoids like young volleyballs, huge arms, and an outstanding trapezius. His legs, on the other hand, were somewhat below par for him, the result of the spinal injury inasmuch as it affected the major nerves leading from the spinal cord to the legs. Norb weighed 230 pounds at this time. During an impromptu morning workout in the Michigan State University field house, he pressed 320 perfectly - no hunching, no excessive drive at the start, no knee kick, not a hint of a back bend - just plain, powerful, perfect pressing.

"My pressing routine at that time, as now," Norb related, "consisted of bench pressing and standing presses. In the bench I did sets of threes with up to 325, sets of twos to 360-370. Within seven weeks of practice I was able to bench press 440 with a medium grip. Meanwhile my standing press increased to 325, I worked up to my limit in sets of twos, from 240 to 300, and when my workout was finished on the Olympic lifts I would press off the rack with a lower weight, usually about 275, 5 sets of 3 repetitions."

In describing his pressing routine, "Ski" says, "I still say if you want to bring up your press, you just have to do more pressing. I don't have any secrets or any special programs other than the one outlined above. If there is a reason for my improvement, I think it must be because when I train I just train a little harder than the next guy. I do make a point of handling heavy weights in the proper way when training on the press, and I feel that 95% of limit is good to reach on a regular workout day."

A muscle injury interrupted Norb's training and his progress in the fall of 1958, but a short layoff proved to be all that was necessary to allow it to heal, and he had no trouble whatsoever with his spine. As lifting activity increased this past spring, he entered a number of contests. By May he was in fine fettle, making a 345 press, his lifetime best, in a contest on the 8th of that month. His total was a very impressive 1035. Encouraged by his improvement, Norb is training hard with his goal set on once again being the U.S. National champion. He's going to make a strong bid to win a berth on the Pan American team and also to win a trip to the land of his forefathers for the 1959 World Championships when that important contest is held in Warsaw early this autumn.

Those of us who remember his as the nonpareil of his day, the greatest exponent of the split technique in the history of modern weightlifting, wish him every success in his long climb back to the pinnacle.