"Pullovers are almost a forgotten exercise."

It truly amazes me that in this modern era, when the bodybuilding champions surpass the greats of the past with more size and cuts than were ever thought possible in the old days, there's at least one area in which today's champs don't compare with pioneers like Clancy Ross, George Eiferman, John Grimek, Reg Park and Bill Pearl, to name just a few. The next time you attend a physique contest, pay particular attention to the contestants' rib cages. What you'll notice is, they're almost nonexistent. When the athletes are called out for comparisons and asked to hit a side chest pose, every single person on stage flexes his arm by mashing them against the side of his chest and tensing his pecs and delts. Nobody does a chest vacuum shot, in which a huge barrel chest tapers down to a narrow waist, as the competitors displayed in years past. Today it's all arms, pecs and delts, and the chests and waists look to be about the same thickness. The expanded chests don't look much different from the way they look when the athletes are standing with relaxed posture.

Bodybuilding stars of the past like Millard Williamson, John Farbotnik, Dave Dupre, Clancy Ross, Chuck Collras and Jack Delinger had magnificent chests that greatly enhanced their physiques. Perhaps the most powerfully formed rib cage I ever photographed was that of the late Bill McArdle. 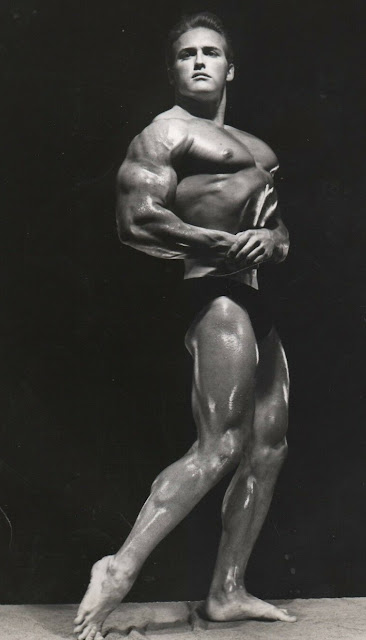 He had a 52 inch chest and 29 inch waist with great pecs that were high, wide and thick from all angles. Freddy Ortiz would rate a close second on my list of great chests. Believe me, nobody competing these days (article published early 1998) is even close to those greats of yesteryear when it comes to total chest development.

All beginners and wanna-be-bodybuilders should be aware of the importance of expanding their rib cage before they become heavily muscled. Far too often - due to a lack of proper guidance - neophyte bodybuilders fail to include chest expanding exercises that work the structure of the chest - the rib cage - in their routines only to discover later that the lack of rib box size deprives them of the chest size and  symmetry needed for a complete physique.

Once the pectorals are heavily developed, it's very difficult to force additional structural expansion on the bony portion of the thorax. It's similar to the problem that exists when people mass up their delts and trapezius without working for structural width first. Although we can't change the bone structure we were born with, we can change the size and shape of the rib cage if we include basic chest expanding exercises in our training from the very beginning.

A former training partner of mine named Richard Kee was somewhat flat chested compared to his 26-biacromial shoulder width. Kee started doing 5 sets of 10-15 reps in the straight arm dumbbell pullover before every workout - six days a week - and eventually he not only corrected the problem, but his massive chest taped 58 inches cold and he bench pressed 580 pounds back in 1960 without steroids. So, even if you've neglected structural chest training and you're over 25, you can still add much depth and size to your chest if you really work hard at it, as Kee did. Incidentally, several guys at our legendary Pasadena Gym made terrific chest improvement by doing pullovers before every workout.

Modern day bodybuilding competitors almost never do any form of pullovers for the chest. All they do is work the pecs from every angle. Pullovers are almost a forgotten exercise. In the 1950s men like Malcolm Brenner, George Eiferman, Art Walge, Bill Trumbo and Marvin Eder could do reps with more than 300 pounds in the bent arm pullover. In the early '60s Ray Routledge, (a Mr. America and Mr. Universe winner) could do 10 reps with a 150-pound barbell in the straight-arm pullover off the floor. Today's champs can't come within a mile of those poundages. I doubt they're ever tried the movements.

If you want a totally developed physique that looks great from the side as well as the front and back, then start incorporating the following chest-expanding exercises into your routine. Schedule them so they follow your heaviest exercises. After each set of squats, superset a light set of stiff-arm pullovers to take advantage of the heavy breathing induced by the squats. You'll be able to use all of the oxygen you take in, and you won't get dizzy from too much oxygenation of the blood.

Mel Williamson, who had one of the most enormous rib boxes of all time, used to do 5 sets of 20 reps in the breathing squat (three deep breaths on every rep) supersetted with stiff-arm pullovers. Mel also had some of the most fabulously developed thighs of the 1950s and '60s, when he won several big titles.

Note: Bill Pearl posted, I mean wrote, a great piece on Mel Williamson competing for the Mr. America. It went up on his FaceBook page on the 25th of this month. And if you want to get some great history of the Iron Game, Bill's putting up a lot a cool stuff there. Here, I'll quote it for ya . . . Millard "Mel" Williamson was born in 1936 in Oakland, California. He graduated U C Berkeley with a pharmaceutical degree, then worked as a biochemist for Dole Pineapple Corporation. Later, he produced the MLO health food line, which sold throughout the world.

With his expanded rib cage capable of supporting a glass of water, or a saucer and cup, Mel's contest wins include the 1956 Mr. Muscle Beach award, and the 1962 Mr. Western America crown.

Note: go over to Bill's page at the link that follows for a look at Williamson's rib cage development. Here's where I started to really enjoy the story . . .

In the mid 60s, the AAU Physique Committee began to employ a points system, based on factors other than the contestant's physique. Much like the AAU Miss America contests, the judges were looking for articulate, well-rounded individuals, who if called upon, could represent the sport at the highest level. This ruling regarding male contest lasted approximately five years.

To say the interviews got out of hand is putting it mildly. Contestants were showing up at prejudgings in tailor-made suits, shoes shined and nails manicured. Others carried diplomas scrapbooks, and To-Whom-It-May-Concern letters, hoping to impress the judges.

Millard's frustration over being interviewed grew even more when the judges seemed more concerned regarding his athletic ability than his physique. When questioned, he informed them that he was an expert archer with the abilities of the legendary William Tell. To prove this, he had brought a bow and arrows to the prejudging with the idea of shooting apples off their heads.

At another event, a judge attempted to console Millard's second placing by saying, "If it wasn't for your enormous handlebar mustache, you could have easily won the contest. I'm sure you would do better if you just cut it back."

Mel took the judge's advice and entered his next contest with the right side of his handlebar completely gone and the left side waxed, and shining in all its glory.

Beautiful story there!
For those who can appreciate it.


The routines will follow. First, we need to look at this one movement he recommends:

Quite a mouthful. Anyhow - Lie on your back on a decline bench with your head as close to the end of the bench as possible. With a dumbbell in each hand, place the weights at the sides of your chest, even with your nipples. Keeping your elbows in during the start of the exercise, take a deep breath and lower the weights in a pullover until they touch the floor behind you or go as low as possible without causing discomfort in your shoulders. Then pull the dumbbells back to starting position along the same path. From there press the weights to arms' length above your chest with your palms facing each other. At that point while drawing your elbows down and back, lower the dumbbells in a semicircle to where they're approximately even with your chest, about 10 inches from your sides. Be sure  that your elbows are drawn down and back so they're in line with your ears. The angles at your elbows should be slightly more than 90 degrees. Bring the dumbbells back to arms' length along the same arc in which you lowered them. Now lower them back to the sides of your chest with your elbows in close and exhale. Then start your second repetition with the pullover, then the press and finally the flye.

I'll skip the other exercise descriptions, but should mention that he recommends doing STIFF ARM pullovers for two or three months before including the heavier BENT ARM variety to keep the growth cycle going.

I recommend that you do a light set of dumbbell pullovers after every set of your heaviest thigh exercise, whether it's squats, leg presses or heavy or high-rep hack squats. Do 15 pullover reps, breathe deeply, and use a light weight. If you do any form of deadlift or heavy pulling movements that leave you gasping for air, follow up each set with some pullovers (or Rader pulls).

The following three programs incorporate one chest-expanding exercise into a growth-promoting chest program.

Deep breathing is important when you exercise, as it supplies your body with oxygen that enables you to train harder and recuperate faster, and it greatly contributes to chest expansion. Posture is very important as well. No matter how hard you train to build your chest, both in terms of structure and muscularity, if you slouch, slump or round your shoulders, your hard work will be in vain. Always stand and sit erect with your head high and your back straight. That will improve your appearance almost as much as adding three or four inches in diameter to your chest.


The better the foundation, the larger and more shapely your chest will become. Don't let an undeveloped rib cage be the flaw that prevents you from reaching your best. Never neglect the chest expanders.