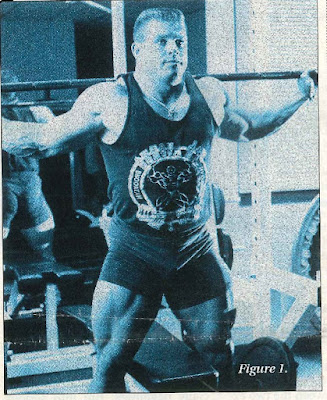 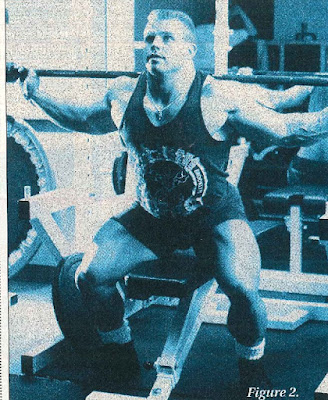 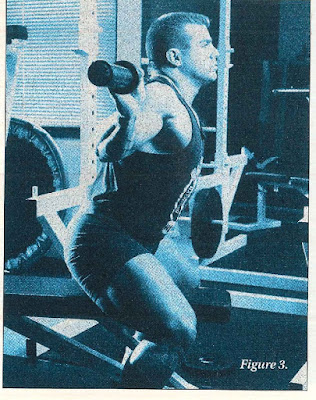 Most trainees realize that the squat is a key component of training. There are many variations of the squat, such as back squats (both high and low bar placement),j front squats, hack squats, split squats, partial squats, and snatch (overhead) squats. One variation that's fairly common and also draws criticism is known as the bench squat.

Once you're in position, descend into a squat until your butt touches the bench, then stand up again. Do not sit on the bench are relax. Do not bounce on the bench in the bottom position.

Frank Vassil, winner of the Teenage Mr. America as well as the '96 NABBA Junior Nationals, illustrates the movement in the accompanying photos. Frank also finished first in his class at the NABBA Nationals and third at the Mr. Universe.

Figure 1 shows the starting position, while Figure 2 and 3 show the bottom  position, with Frank just touching the bench.

Many trainees feel more secure and confident knowing that a bench is underneath them, preventing them from going too deep. The depth guard also serves another group the included tall recreational players, basketball players and some football players. The hip and knee angles during the squat are different for athletes of different heights, a point that training programs don't always take into consideration.

Recently, has been showing reruns of "The World's Strongest Man" competitions. The original competitions included a maximum squat performed on a Smith machine, in which competitors had to lower the bar until it hit a rubber stop on the rack and then stand up again. Franco Columbu is 5'5" and Lou Ferrigno is 6'5", yet the rubber stop on the machine was set to the same point for both of them. That gave Franco a great advantage, and he beat Bruce Wilhelm, Ken Patera and Bob Young to win a squat competition. Franco was very strong, but Wilhelm was a world class Olympic lifter, as was Patera, and Young (powerlifting champion Doug Young's brother) was a top guard in the NFL. All three tipped the scales at nearly 300 pounds apiece.

The point is that taller trainees can vary their squat depth to enable them to handle more weight. (That's true as a general rule, but there are exceptions. for example, Pete Koch, then a 6'6", 284 pound defensive end, broke the Kansas City Chief's strength records with a 665 pound full squat, meaning hamstrings on the calves; a 505 pound bench press and a 350 pound power clean. (Pete is not an actor and best remembered for his role as Swede in "Heartbreak Ridge.") Superheavyweight Olympic weightlifter Vasily Alexeev, at 6/3", performed a clean and jerk with 573, and the clean is of course completed by rising from a full front squat position.) When you perform bench squats, however, the bench has the same effect as the rubber stop on the Smith machine.

While it's true that a 5'5" athlete and a 6'6" one will squat to different depths if they use the same bench, you can easily correct for that by adjusting the bench height. Some benches are adjustable, or, if you don't have access to such equipment, you can elevate a bench by placing large, sturdy blocks under it.

One main advantage of the bench squat is that it can be used by trainees who have knee pain - both from injuries and general pain around the knee cap, or patella, which is also known as patellofemoral pain. Trainees who have knee pain may find that they can squat to a certain depth - usually just above parallel to the floor or a little higher - without pain, but if they go any lower, they feel significant discomfort. In two previous installments of this column I described pain around the knee cap that may be caused by the way the patella moves within the groove in the femur, or thigh bone. Not all knee caps have the same shape. Not all grooves in the femur are the same shape and depth. Some people have excessive tightness in the connective tissue on the outer area of their knee. Some have damaged the cartilage that lines the joint, and others have damaged the cartilage within the joint or the ligaments of the knee. As you can see, there are many people who have special needs and may not be able to do a standard squat. The bench squat may serve as a viable substitute.

There are disadvantages to this movement as well. One of the most common criticisms is actually correct. Some trainees descend rapidly and try to bounce off the bench to gain momentum on the ascent. That's very harmful to the back. The direct vertical load that it puts on the lumbar disks that are located between the vertebrae is called an axial load. Now, the spine is already carrying an axial load courtesy of the bar on your back. By bouncing at the bottom fo the bench squat, you increase the load many times over. When you do that, you risk rupturing a lumbar disk.

Another potential problem occurs if you sit down completely on the bench, instead of just touching your butt to it. When you do that, your back muscles may relax and your pelvis may tilt backward. Since you still have the bar on your back, this relaxing of the muscles and posterior tilting of the pelvis may cause injury to the ligaments of the spine, protrusion or herniation of a disk or injury to the two large joints in the pelvis, the sacroiliac joints. All are painful conditions and will most likely require a visit to your health-care practitioner.

The bench squat was made popular in the 1970s by George Frenn, and Olympic hammer thrower and holder of an American record in the squat. Frenn performed a squat with 853 pounds at a bodyweight of 242, and he performed a bench squat with more than 900 pounds.

He described his bench squat methods in Strength & Health and Muscular Development. He'd sit down all the way and lift his feet off the ground, then slam his feet down and stand up. It worked for him, but on a clinical basis I must advise readers not to use that bench squat technique, as you will subject yourself to a great risk of injury. Even though Frenn was holding up fairly well at the time, I don't know how he felt later.

Pro bodybuilder and popular trainer Charles Glass was influenced by Frenn early in his career. Glass was a gymnast at the University of California at Berkeley, and, when his gymnastics career ended, he wanted to get more involved in bodybuilding and weight training. As with most gymnasts who convert to bodybuilding, Charles' legs had to play catch-up with his upper body. Frenn started Glass on bench squats, and Glass gained size and strength.

One day Glass was squatting, and he realized that something was different. He looked down, and the bench was gone. From behind him Glass could hear Frenn saying, "Keep squatting." Frenn had pulled the bench out of the way because he felt Glass had progressed to the point where he should be performing standard squats.

Other lifters have used low boxes or benches to build power in the bottom position of the squat. George Zangas is a powerlifter and was the director of the now-defunct Thompson Powerlifting Team that included Bill Kazmaier, David Shaw, Doyle Kenady, Larry Kidney, Marv Phillips, Enrique Hernandez and Ernie Steinkirchner. George uses the low box to develop power in the bottom position of the power squat to help lifters drive out of that position. According to him, Ohio powerlifting coach Louie Simmons uses what he calls a "hassock squat." A hassock is a low footrest for a couch or chair. Simmons has his powerlifters squat over one using the methods described above - they just barely touch the hassock, and then they stand again. Zangas added that champion powerlifter Larry Kidney used the low-box squat as well, and he squatted in competition with more than 900 pounds.

Obviously, this exercise has been around in various forms for years [article published mid-1998]. You can also do it in a power rack by setting the pins at the desired height. Some strength coaches and strength athletes don't like the bench squat, but many do. You can certainly give it a try and perform it safely above all else.

Keep the bench squat in mind if you have continuing knee pain or if you're a particularly tall athlete. If you have ongoing knee pain, however, make sure you have a healthcare professional evaluate your condition.

Train smart first, then train hard.
If you do, you'll still be training years from now.