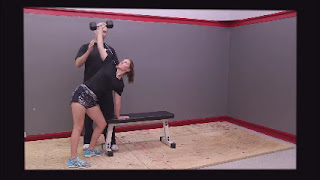 The Turkish Row challenges torso and upper body muscular strength, stability, and mobility. It is an excellent exercise for those struggling with learning or performing the Turkish Get-Up.

It is a complete exercise designed to increase muscular control throughout the upper body and core using a combination of several movements. The Turkish Row combines features of the single arm bentover row, torso rotation, and single arm overhead press. The name, Turkish Row, was devised because of the similarity to the overhead support position of the Turkish Get-Up.  The Turkish Row can be used as a progression exercise toward the complete Turkish Get-Up that many find challenging, such as the overhead one arm support position.

An exercise that partially resembles portions of the Turkish Row is the Bent Press. This lift is seldom practiced but was a common exercise in Strongman shows at the turn of the 20th Century. The bent press begins with the weight lifted from the floor to the shoulder where it is held in one hand momentarily stationary at the shoulder with the feet spread comfortably. The exercise is performed by simultaneously performing lateral trunk flexion leading to a side bending at the waist with  simultaneously pressing the weight vertically over the rotated torso and body. At this point the body will be in a sideways bentover position with the shoulder abducted to 90 degrees and the elbow completely extended. In the finishing position of the bent press, the lifter holds the weight on the overhead one arm support position, while maintaining a fully flexed and rotated torso. Although the final position of bent press and Turkish Row are similar, the lack of one arm supported on the bent press more closely resembles a combination of the dumbbell row and the phase of the Turkish Get-Up that occurs before standing.

Benefits of the Exercise

Movements contained within the Turkish Row are effective for improving and maintaining strength between mobilized and immobilized limbs via neural cross-education. As a novel exercise, the Turkish Row and the combination of movements it involves have not been analyzed for precise muscle activation, range of motion, stability, or strength enhancement.

The one hand support of the Turkish Row may have the effect of lowering spinal compressive forces that are elicited in an unsupported bentover row. The increase in initial torso rotation associated with the contralateral hand support may facilitate the torso rotation performed in the Turkish Row for those with any history of spinal injury is yet to be investigated so the exercise should be reserved for those with no history of spinal injury. The movement includes loaded spinal rotation and is ballistic in nature.

The Turkish Row is useful as a progression toward the Turkish Get-Up in many ways. First, because of the similarity of the set-up for the dumbbell row, it offers those who are struggling with the overhead support positions required to successfully perform a get-up an opportunity to train, in a more familiar body position than a full get-up. Second, for those with poor spine rotation mobility an increased torso rotation is achieved as the individual learns to combine the rotation, assisted by the rowing action, into a stable and controlled action. Third, controlling the combination of the row and torso rotation may be unique to beginners who lack the body awareness to maintain proper positions. By performing the exercise with control and the potential benefit of a spotter, the safety of the rotation is improved. Fourth, the final phase of the Turkish Row involves a position like the phase of the get-up that many struggle with most, the leg sweeping action as one goes from the seated to kneeling position.

To perform the Turkish Row correctly, the ability to achieve each body position is critical. By practicing the row, torso rotation, and overhead support positions of the Turkish Row, a positive impact on shoulder and torso mobility and balance may by achieved. By training this unfamiliar row-rotation press combination in a position that challenges numerous muscle groups, the development of stability, mobility, and control helps not only build the physical abilities mentioned above but also the safety and confidence of the lifter progressing to the Turkish Get-Up. 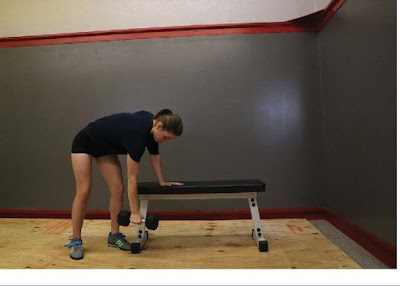 Similar to the starting position of a traditional right-hand dumbbell row, the legs are spread in a staggered stance so that the left foot is in front of the right leg. The torso starts in a neutral spine position. The hip is flexed to approximately 90 degrees so that the upper body is at an approximately 45-90 degree angle with the floor. The left arm is extended with the hand on the bench for support. The dumbbell is suspended at arm's length over the floor in the right hand. 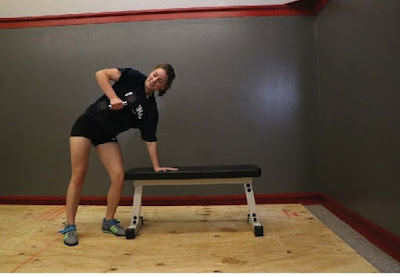 Pull the dumbbell up to the side of the chest, keeping the right arm close to the body and the torso as stationary as possible. Be sure to keep the left arm extended and the lower back in a neutral spine position. A fast, but controlled rowing speed is best for a smoother transition to the next major action of the exercise, the torso rotation. 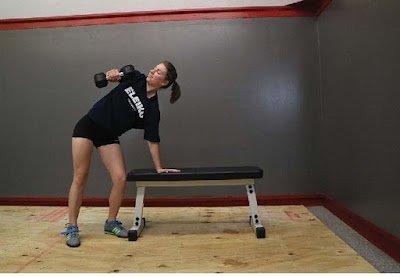 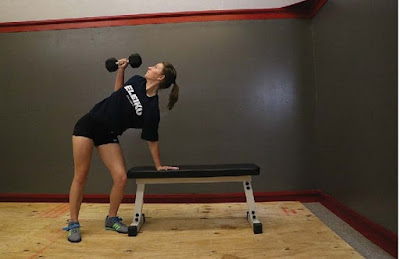 As the row is nearing completion, the torso is rotated anteriorly to the right by turning (opening) the chest to the right. The torso rotation is relatively fast and acts to gradually decelerate the dumbbell as the rowing action continues until the elbow is fully flexed and scapula is fully adducted. The shoulders are rotated as close to vertical as possible with the right elbow pointing behind the body. In the Turkish Row, the dumbbell is held directly over the torso and shoulder momentarily before the pressing action. The humerus is held slightly behind the torso, in a similar degree of hyperadduction that occurs during the dumbbell bench press. Keep the left arm straight and in contact with the bench.

By combining the rowing action with the torso rotation in a quick and smooth motion, the deceleration helps decrease the likelihood of unnecessary overemphasis on shoulder external rotation. By avoiding over-emphasized loaded shoulder external rotation, the stress on the rotator cuff muscles will be minimized as the load is absorbed by the larger back and shoulder musculature. 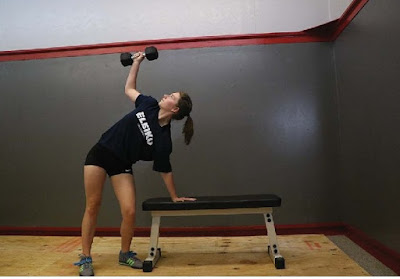 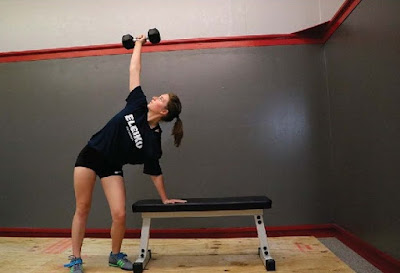 After the completion of the row and torso rotation, the dumbbell is pressed vertically by extending the right elbow using a slow, controlled concentric action. Once in this final position the left hand, left shoulder, right shoulder, and right hand should be in a relatively straight vertical line.

The training intensity can be cycled like any strength exercise but due to the unstable positions encountered in the Turkish Row, the general set and rep schemes are usually dependent on the control and technique of the lifter. 3 sets of 10 reps is a typical prescription for, but if a lifter is performing a more intense variation, or a heavier load than previously attempted, it may be more advisable to perform sets of 3-5 reps. The maximum load of the exercise is usually limited to loads that can be performed with a good technique and control for at least 3 repetitions.

The common breathing pattern most lifters naturally undertake includes taking a large breath before the row. The breath is held through the torso rotation, until the dumbbell is held stable over the shoulder and torso. The lifter then exhales, takes another breath,and presses the dumbbell vertically with the added stability gained from the second breath and an increased intra-abdominal pressure.

The potential for the dumbbell to be pressed in an unstable direction overhead warrants proper spotting. spotting is not required for the initial rowing action but may be necessary during the completion of the row, torso rotation, and pressing actions. A single spotter should stand behind the lifter so that they do not impede the rowing action.

For those who exhibit the torso rotation ability, shoulder mobility, and shoulder stability to perform the basic Turkish Row with good technique, more advanced variations of the Turkish Row may be performed. To qualify for higher loads or a more advanced variation of the exercise, there should be no signs of a lack of sufficient torso rotation, scapula adduction, or pressing ability or control that hinders the efficient performance of the exercise. Also, the final position should always result with the dumbbell being held, with control, directly over the shoulder of the pressing arm, shoulders held in a vertical line and the contralateral hand directly under the bottom shoulder. Although a slight angle may exist, the aim is a straight vertical line from the bottom hand to top hand.

One variation is to perform the exercise with no pause between the rowing and pressing actions. By rapidly accelerating the dumbbell during the rowing action, the arm will quickly reach the torso, limiting excessive rotation by placing a hand on the scapula, over overhead pressing errors, by grasping the wrist of the lifter's arm during the pressing motion.

An even more advanced variation would use the same basic technique but with the removal of any form of opposite arm support. This Turkish Row variation looks like the final position of the bent press. It differs from the bent press because the lifter starts in a partially bentover position before using a rapid rowing action to bring the dumbbell to the shoulder, with the addition of the torso rotation, before the pressing action. By removing the support from the opposite arm and leg, the lifter would need to engage many more stabilizers throughout their entire body, increasing the intensity considerably. Although no research is available that addresses the degree of spinal rotation that occurs during this more advanced variation of the Turkish Row, it would like result in for the love of Christ stop reading already and find out for yourself if this thing has something to offer YOU.

Okay . . . to sum up. The Turkish Row has the potential to aid exercisers who are in need of upper-body mobility and torso mobility, stability, and strength. In addition, the Turkish Row is an excellent progression exercise for anyone who is attempting the Turkish Get-Up. Once a lifter can perform the Turkish Row with control, the hip extension and leg sweeping phases of the Turkish Get-Up should be made much easier to accomplish without loss of proper arm position.